As an unforeseen byproduct of the global coronavirus pandemic, there may be thousands of dollars lurking in the trunk of your leased car. Not literally, of course, but lend an ear to Edmunds’ Executive Director of Insights Jessica Caldwell. Caldwell explains that due to the recent hike in used car values, leased cars may be worth more today than originally estimated.

“Most consumers likely aren’t aware that there are alternatives to turning in their leased vehicle, let alone that they might be able to turn it into cash,” Caldwell explains. “There’s unusually strong demand in the used vehicle market right now, and prices and values are running high.”

To put it in even plainer terms, the pandemic has put a crimp on the supply of new cars, causing used car values to be higher than normal. Used car values being higher than normal means there’s the possibility that your leased vehicle’s “street value” might be significantly higher than the dealer’s pre-determined buyout price—basically what the finance company/dealer estimated it would be worth today when you first signed the lease.

“If you have a lease return coming up in the next few months, the smart thing to do right now would be to check if you have equity in your vehicle because there’s a good possibility that you could trade it in to offset the cost of a new car or sell it for a nice chunk of change,” she added.

If your car’s “street value” is indeed higher than the buyout figure, that means you have equity. If you have equity, you have the opportunity to buy out your lease and then sell it to a third party, (hopefully) making a tidy profit. That cash is then yours to bank, put towards a new car, or pre-order a PlayStation 5 with. Do whatever you want with it. It’s your cash.

Edmunds has even put together a nice and handy infographic found here that lays out in more detail how and whether or not this would work for your specific situation. But those paying attention will have already spotted a couple of caveats with this strategy.

First, you’re gonna need the cash on-hand to buy the car out, an amount that’s typically in the tens of thousands. Not only that, but you’ll have to be comfortable tying that cash into a depreciating asset for however long it’ll take to sell the car. And then you have to deal with the matter of actually selling the thing.

“Most people probably don’t have tens of thousands of dollars on hand to buy out their leased vehicle or want to arrange financing to just turn around and sell it, and then on top of that be willing to go through the stress of a private-party sale given current health and safety concerns,” said Edmunds’ Senior Manager of Insights Ivan Drury. “You might not get the maximum amount for your leased vehicle if you trade it in to a dealership toward your next car purchase or sell it for cash with an online offer on Edmunds, but you’ll certainly save yourself the hassle and paperwork.”

There’s no such thing as a free lunch, folks.

That said, the buying-and-selling experts at Edmunds have released a list of 2017 models (typical leases last around three years) that expect to yield the most from this strategy, taking the difference between their average buyout prices and average private sale prices. 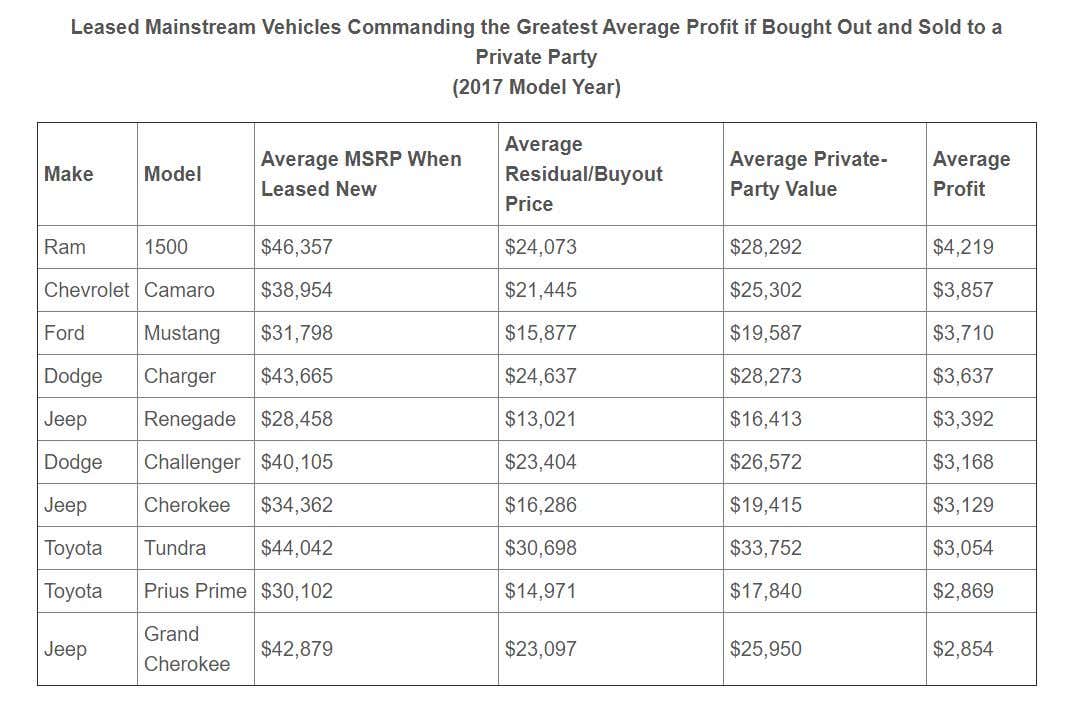 Interestingly, while the top-profiting “mainstream” vehicles aren’t technically considered luxury cars, most appear to be somewhat superfluous in spirit and, for some reason, staunchly American, with the list mostly populated with pickup trucks, muscle cars, and Jeeps. No one appears to be making much money on their leased Nissan Sentra, is what I’m trying to say. 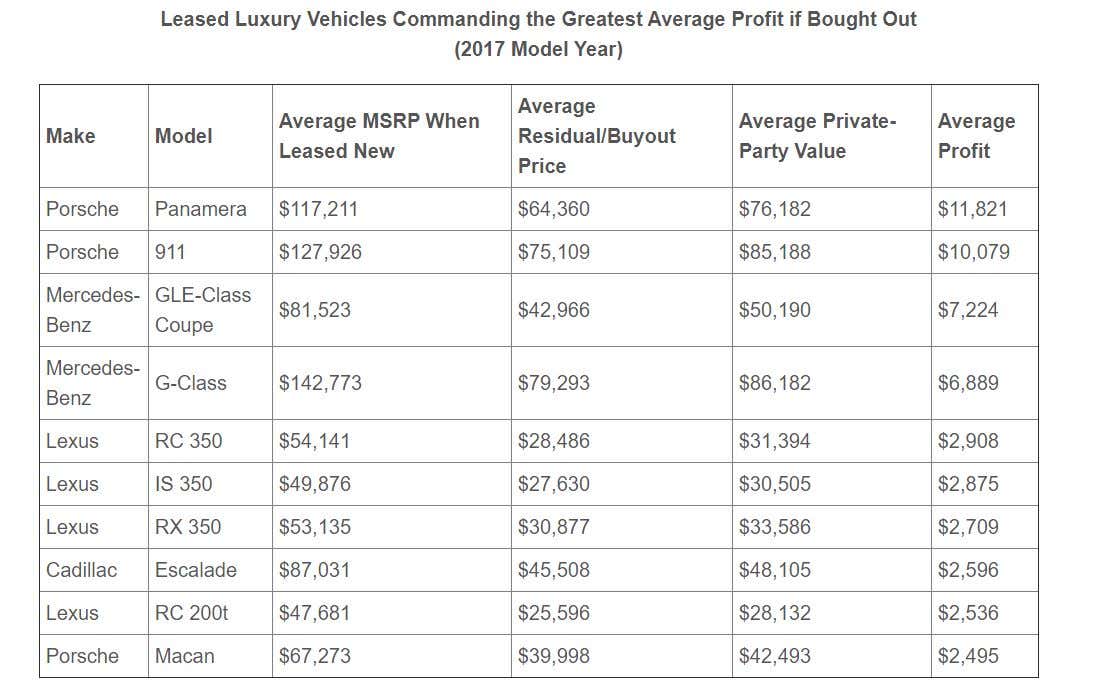 On the luxury side, the winners are big Benzes, Lexus products of varying size, and Porsches with the Panamera and 911 breaking five digits in average potential profit.

Watch: Audi 80 and a Lamborghini Gallardo Dice it Up on a Rallycross Circuit
Car Reviews