Germany and other European countries have been subject to catastrophic flooding following intense rainfall the past few weeks. The death toll of the disaster numbers in the hundreds so far, and the damage is expected to cost billions of dollars to repair.

This is the context in which YouTuber Misha Charoudin received a two-week press loan of an Audi RS6. The vehicle was delivered a few days before the natural disaster and was being tested as normal. However, once the flooding occurred, Charoudin’s personal vehicle was destroyed, so he decided to use the RS6 to help local flood victims in the stead of his own car. What was supposed to be tortured tires on the Nurburgring and high-speed runs on the Autobahn turned into treks down muddy byways and delivering supplies to flood-ravaged areas. At least one Audi representative, seeing the company’s vehicle being used in such a way, was less than pleased. 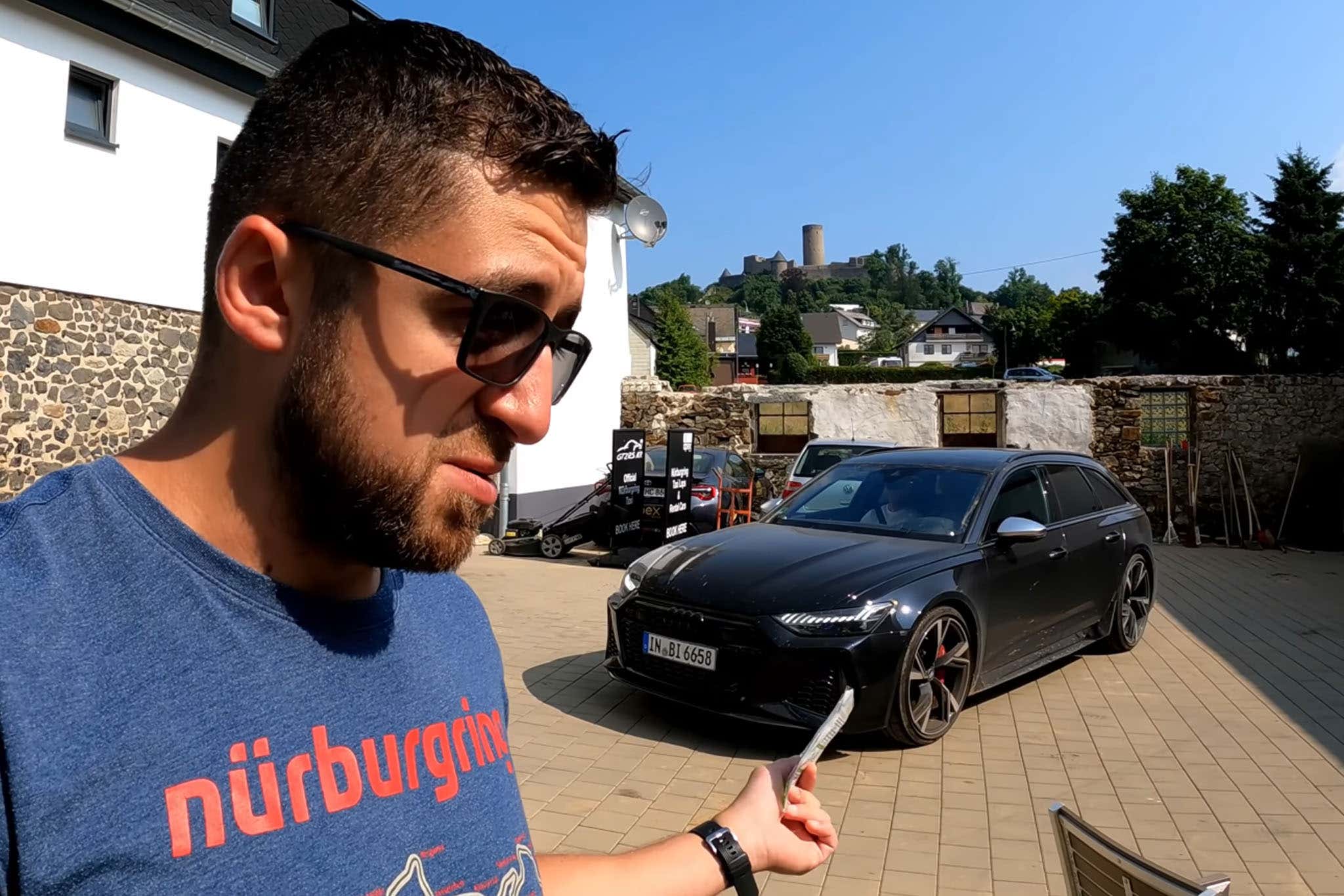 According to Charoudin, he received an email from the Audi representative saying that what he had used the RS6 for was “not the purpose of the test car.” They added that he should’ve done more conventional testing with it instead, like the aforementioned high-speed runs on Germany’s famously de-restricted highways, or a walkaround of the vehicle’s features and options. This email was ended, according to Charoudin, with the representative not so subtly suggesting that the vehicle better not be damaged when it was returned to the automaker. It’s worth noting that after all of this was explained in the video embedded below, Charoudin apologized to the automaker.

What has followed has been something of a PR nightmare for Audi on social media. In the face of devastation in regions like Rhineland-Palatinate and North Rhine-Westphalia, Audi has presented itself as more worried about the condition of its loaner vehicle than the aid it was used to deliver to those in need. The fallout has been visible on YouTube where the video was posted, as well as on Reddit’s r/cars and Instagram.

Thanks to one of Charoudin’s fellow YouTubers, Robert Mitchell, other voices at Audi have been heard in addition to Mitchell’s own commentary. Mitchell runs a channel similar to Charoudin’s, highlighting vehicles’ performance on the Nurburgring and other aspects of car culture. In an Instagram story, he posted a screenshot of another correspondence with an Audi employee. The message sent to Mitchell reads, “Hi Robert, I hope you know that PR rep is just one part of the company. I work for Audi Sport and we lauded the actions taken by [Charoudin and his associates] in some internal calls amongst colleagues.” The employee continued to explain that Misha is “hugely appreciated by us,” and that “We have taken our own actions to support the people in Ahrweiler (a local German town.)”

Additional posts by Mitchell on social media offer more light on the situation. The YouTuber posted photos of Charoudin’s Apex Nurburg coworkers cleaning the car thoroughly before being prompted by the automaker. In another, Mitchell states the vehicle was “washed regularly and [the] interior always maintained.” Charoudin, as well as posting pictures of the vehicle positively filthy during relief efforts, also posted a photo on Instagram of the vehicle when he returned it to Audi, and you can see it’s spotless. 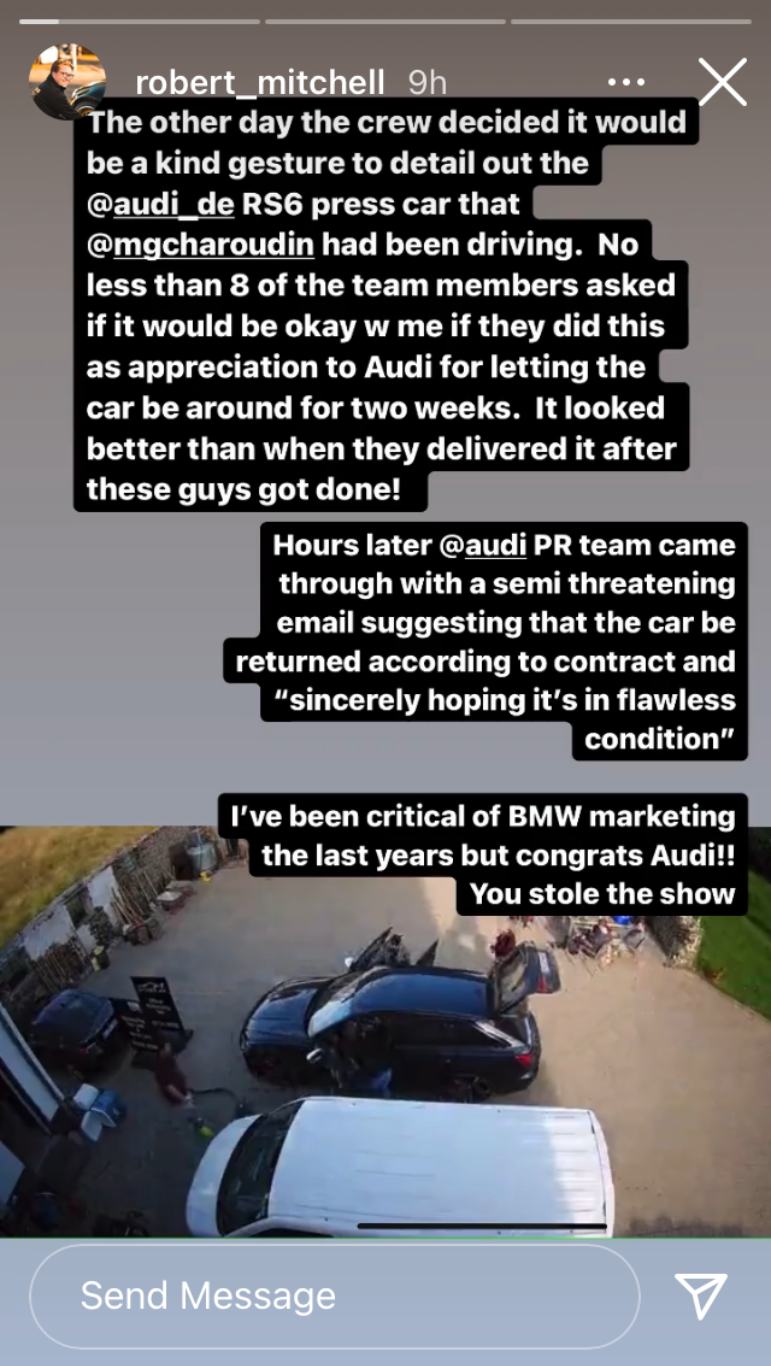 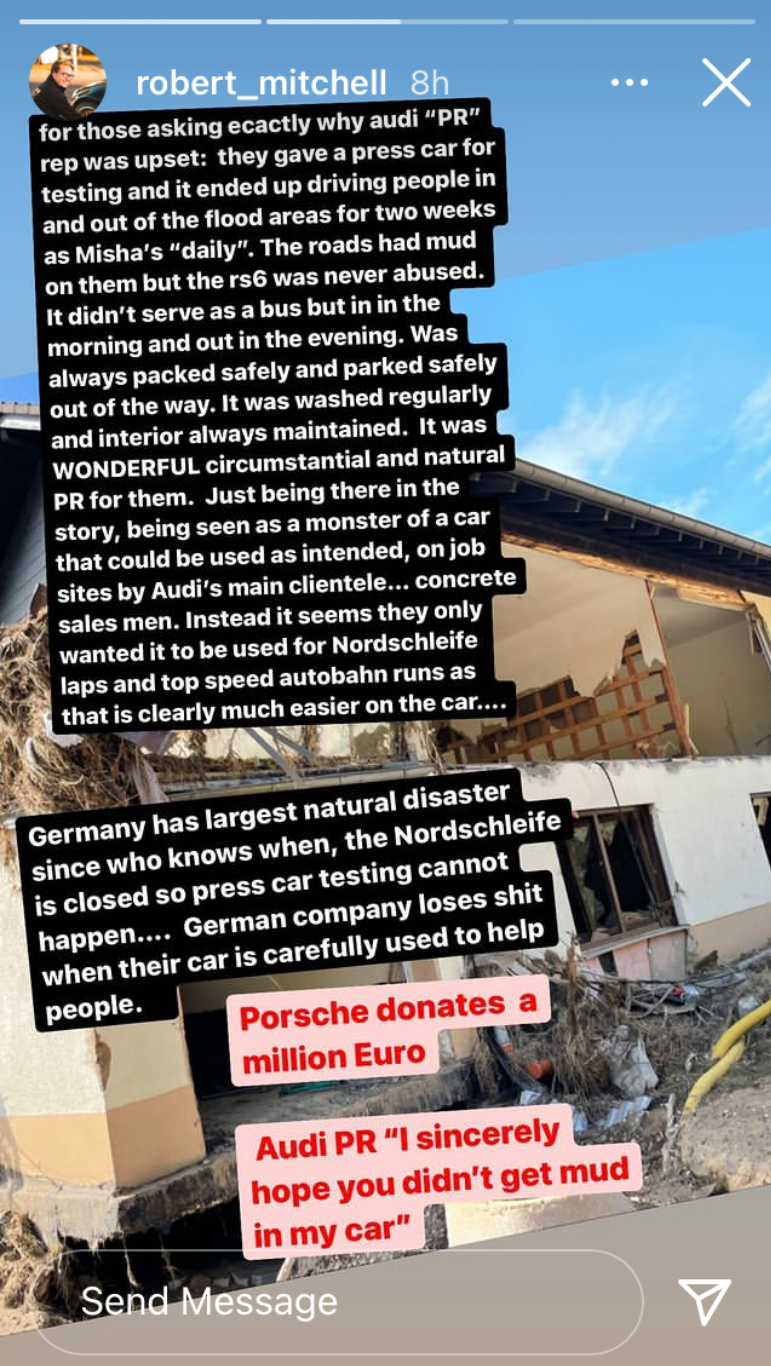 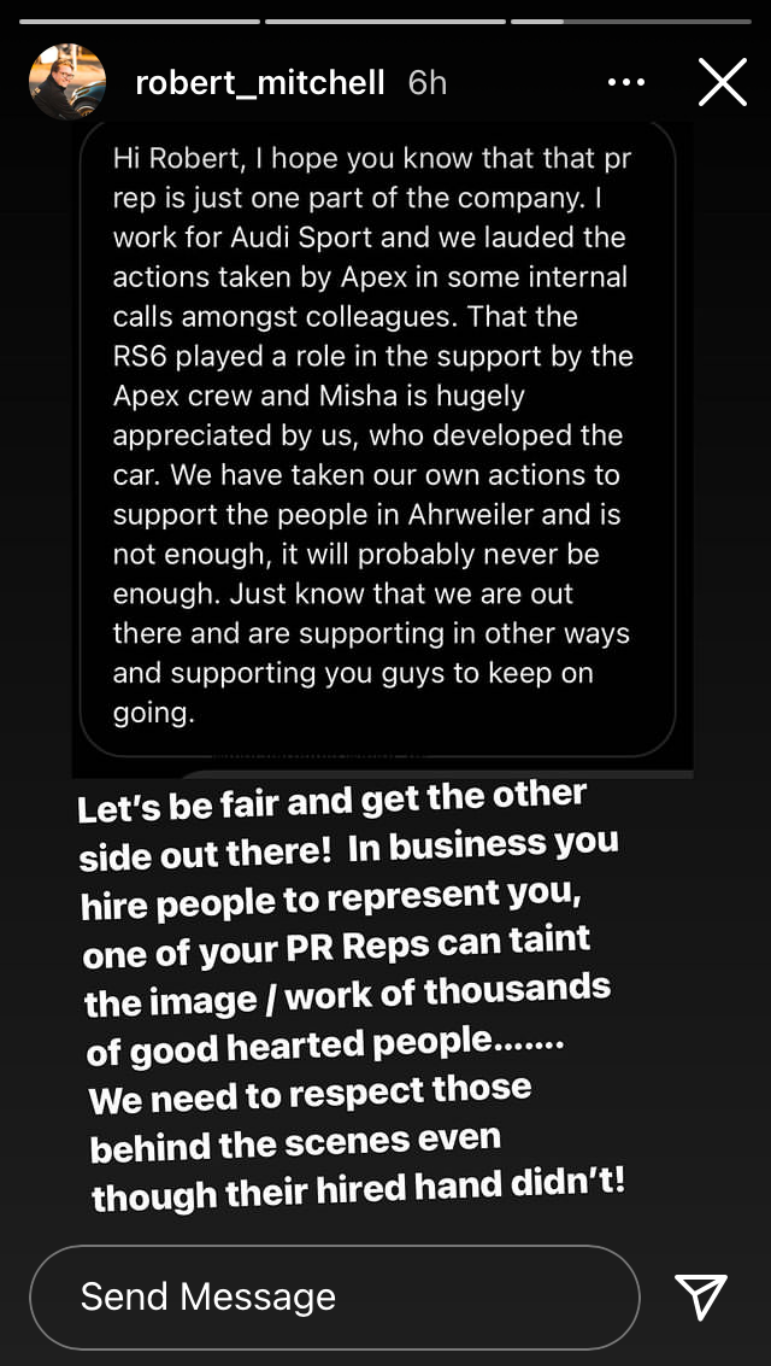 “I am happy that Audi as a company is taking initiative to help the affected financially. I am also grateful for the fact that I was able to enjoy the car for the rental agreement period and to help out many people in need,” Charoudin said, speaking to The Drive. “I asked one of my PR contacts if I could have a replacement car or if they would like to contribute in another way to this situation, but unfortunately I’ve got a totally unexpected reply which made me really sad.”

Charoudin went on to say that just because one Audi employee didn’t see the big picture doesn’t mean the whole company should be forsaken. “The majority of Audi and Audi Sport employees loved what I was doing with the car and if there would have been any real red flags, I’m sure they would have ended the rental agreement prematurely,” he said. “Over the last 24 hours, I’ve received lots of praise from various international Audi employees and key players saying that they loved seeing me do what I was doing. And I would have loved to continue doing so.”

As far as official statements from Audi go regarding the situation, none have emerged yet. We contacted the German automaker for comment, but as of publishing, we haven’t heard back.

Ironically, where one automaker failed to grasp the entire scope of a situation, a different one stepped in to make it right. In another video uploaded by Charoudin, Ford Germany—based out of nearby Cologne—donated three Transit vans to Apex Nurburg for three months to allow the company to continue its support efforts in earnest. In fact, a representative of the automaker says in the video embedded below that the company is donating somewhere around 50 vehicles to those who need them in the area. “Use them,” the spokesperson said. “Don’t worry what condition they come back in.”

In the same video, it’s worth noting that Charoudin says “Everyone [helping] in this situation deserves a mention and a massive thank you,” and that’s true. Although Audi clearly made a PR misstep handling this RS6 situation, the company is taking strides to offer relief in the regions affected by flooding. As reported by Motor1, the automaker is currently calling on its employees to donate money to an internal fundraiser intended to help victims of the natural disaster. By the time the fundraiser ends on Sept. 10, Audi has said the amount donated will be above six figures.

So, an Audi rep’s concern about the state of a loaned vehicle snowballed into social media outrage, and another automaker stepped in at an opportune time. It’s all matter of press, but the background to the situation is far more serious. The cleanup, search, and rescue operations in Germany are still ongoing, and thousands of people have been affected by the disaster. Charoudin says there are several ways anyone can help; Koenigsegg is running a fundraiser, and the Apex team itself is accepting donations as well.

Let’s all hope the situation in Germany is back to normal soon.

Robert Kubica to replace Raikkonen for FP1 in Hungary