How low can you go? Skinny Monza F1 wings explained

Monza holds a special place on the calendar, owing to the unique challenge that it poses to engineers and drivers alike. While higher top speeds are achieved elsewhere, its unique layout prompts many designers to create specific rear wing designs for this one race each year.

Join us as we take a look at the various solutions used by each team to help reduce downforce and drag for the unique challenges of the Italian GP. 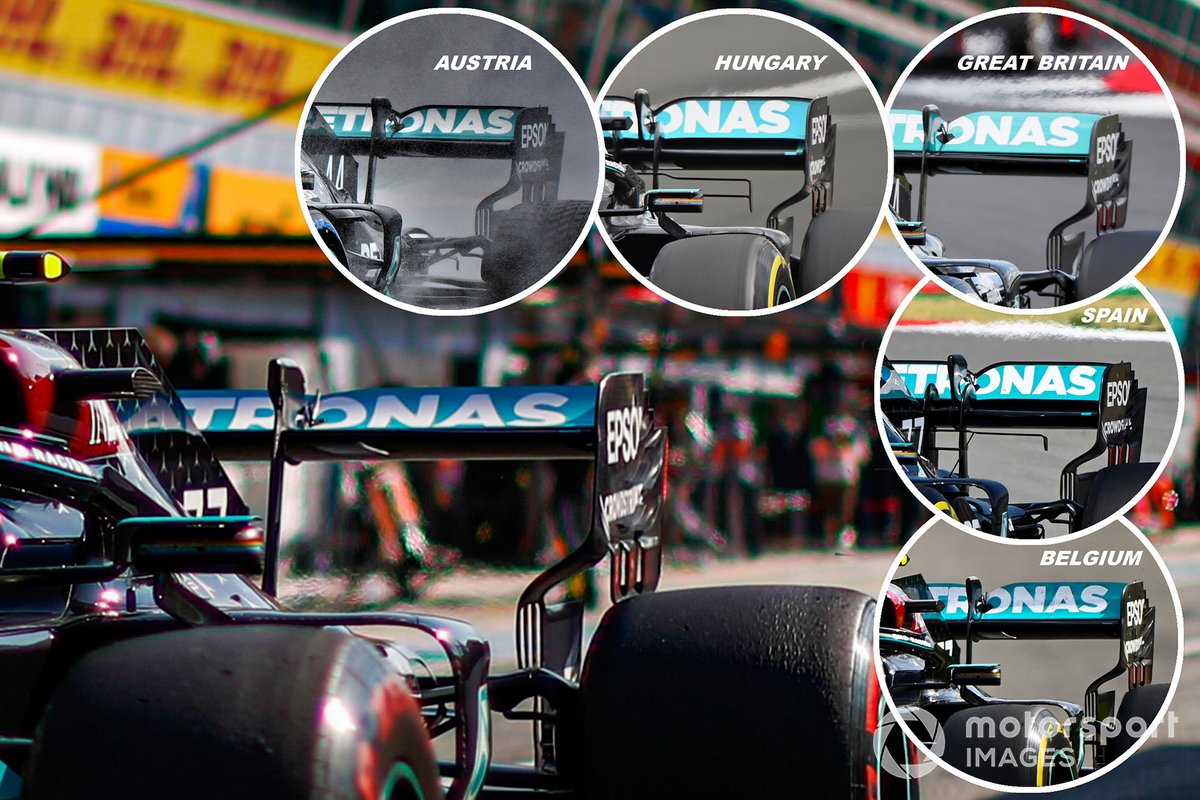 Mercedes carried a fair amount of rear wing when compared with some rivals but, as we can see from this comparison it’s much less than we’ve seen it use at any point throughout the season so far, with the wing featuring a conventional shape and no Gurney flap on the upper flap’s trailing edge. In Austria it used a single pillar arrangement, a sizable top flap complete with a deep Gurney flap on the trailing edge.

For the Hungarian GP it went for a full downforce rear wing and included a double element T-Wing to supplement it. The rear wing featured a twin mounting pillar configuration, which was favoured in order to reduce the wing’s tendency to be pulled around by the associated loads. A deeper mainplane and top flap also accompanied them, along with the retention of the deep Gurney flap. But, note how it also expanded the central V in the upper flap to try and offset some of the additional drag that would be created.

Another slightly revised layout appeared for the races at Silverstone, which was loosely based around the same design as the one seen in Austria. To reduce drag and improve their top speed on the ex-airfield’s longer straights, Mercedes removed the Gurney flap from the trailing edge of the upper flap. It was a return to a high downforce configuration for the Spanish GP but, rather than the double element T-wing, it favoured a single element version.

Then to Belgium and the challenges of Spa-Francorchamps, where all of the teams have to balance their desire to reduce drag over the need for downforce in sector two. Once again the team opted for a setup similar to the one seen at Silverstone but ditched the Gurney flap on the trailing edge of the upper flap as it looked to strip off some downforce whilst compromising balance a little. 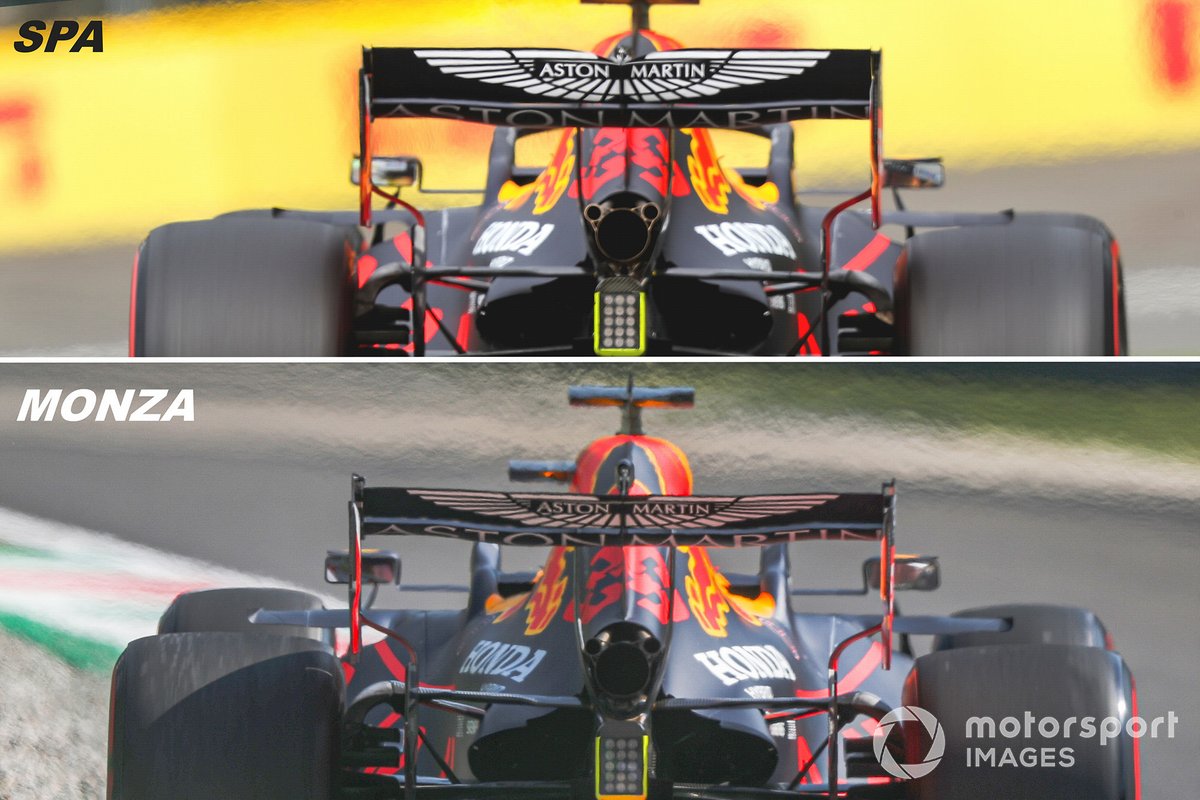 Red Bull continued to strip back downforce for the Italian GP in an effort to boost straightline speed. Both rear wing designs featured a gentle spoon shaping to the mainplane, albeit with the Monza spec pegged at a shallower angle. 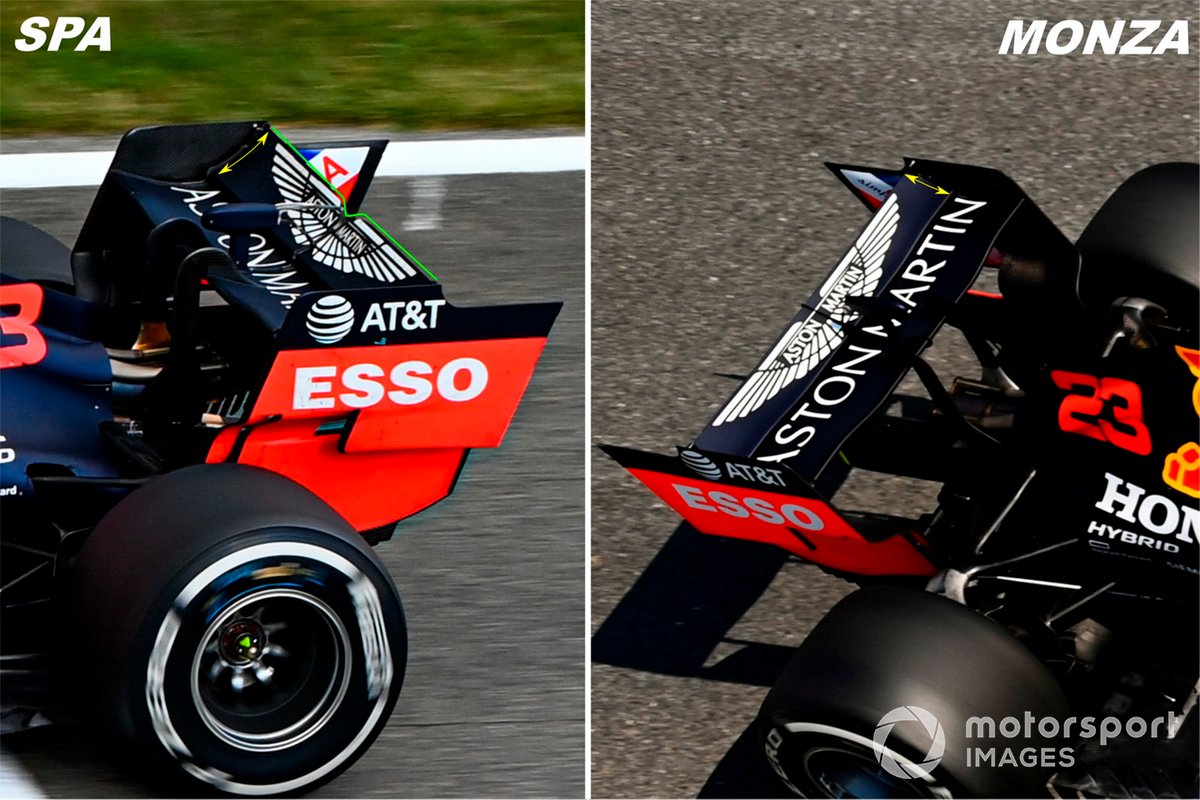 As you can see from both comparative images the chord on the wing used in Monza (right) is significantly shorter than the one used at Spa, with the flap effectively having the trailing edge lopped off all the way past the point where the central V groove previously existed. This also resulted in a change to the position of DRS adjuster, whilst you’ll also note the central mounting pillars are also different to reduce their aerodynamic impact.

Let’s take a look at the other cars on the grid, and how they all compared.

Click on the arrows on the images to scroll through them…

1986: Would You Rather Carry a Civic Body or Drive a Plymouth Colt?