Revealed: The untold secret behind a Ferrari flop

While Ferrari is nowadays a team that sets it sights on wins and world championship battles, a few decades ago the team was in very different shape.

One of its most difficult campaigns came in 1992 when Ferrari unleashed the F92A – a bold but disastrous challenger. It racked up just 21 points and two visits to the podium, in a year dogged by off track excursions and reliability issues.

At the time, the car’s aerodynamics – and specifically its double-floor concept – were blamed for its poor performance but an interview with Jean Alesi has unearthed a new perspective on what happened.

So with the help of insight from one of its designers, Jean-Claude Migeot, we set the record straight on what really happened that year.

For rather than being a problem with the chassis, it is now suggested that the root of the problem was actually its V12 powerunit.

As Jean Alesi Told Motorsport.com: “The engine suffered from blow-by, that is to say there was a leakage of oil from the piston rings in the combustion chamber.

“This caused 40-50bhp to be lost. But in Ferrari tradition, it could not be said that it was the fault of the V12. Instead the fault was attributed to the car – which is a shame because the concept was interesting.” 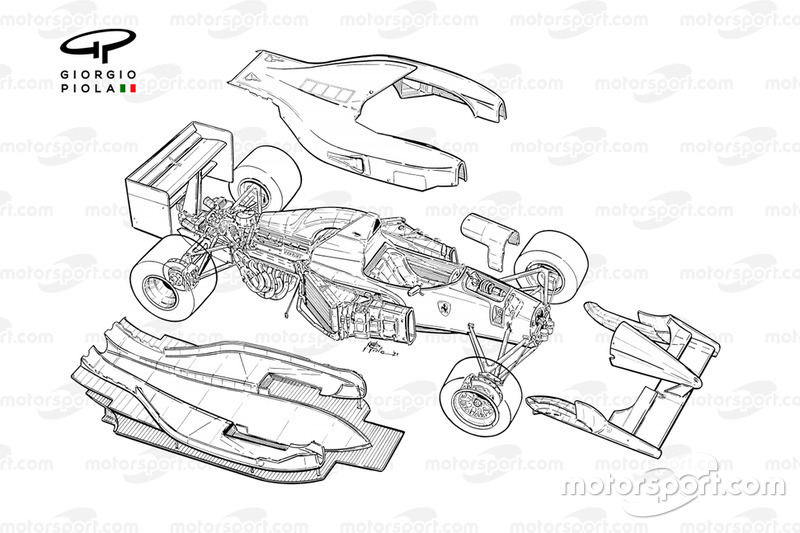 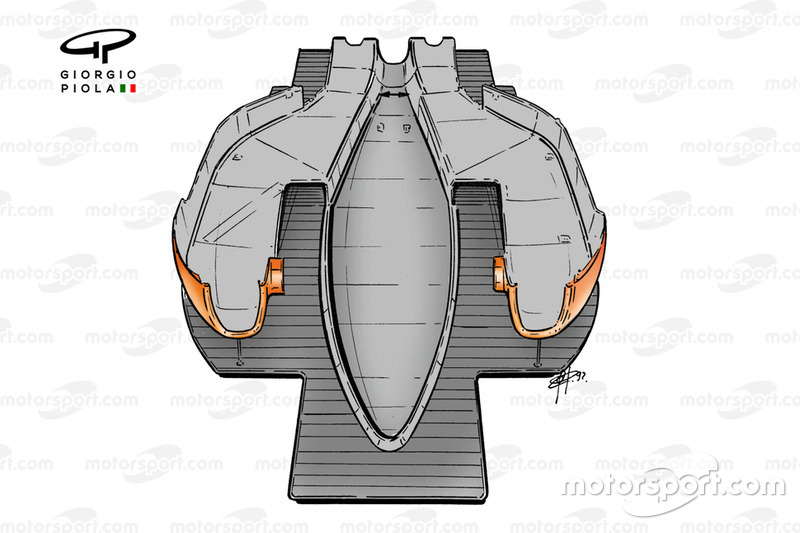 It was all too easy to credit the failure of this car to the new and bold aerodynamic package that the team had created, with its fighter jet-like sidepods mounted on a second floor. It looked and operated very differently to anything else on the grid.

At the time, it was suggested that the double floor flexed and therefore the aerodynamic load became unstable, making the car difficult to control. Migeot said that was not the case.

“The car was very innovative, with a new V12 and new chassis, but the problems were mechanical: due to the lack of engine power, caused by the blow-by,” he said.

“We had to use an extra oil tank in order that we could finish the race with enough lubricant, which only added to the difficulties we had setting up the new mono-shock front suspension”. 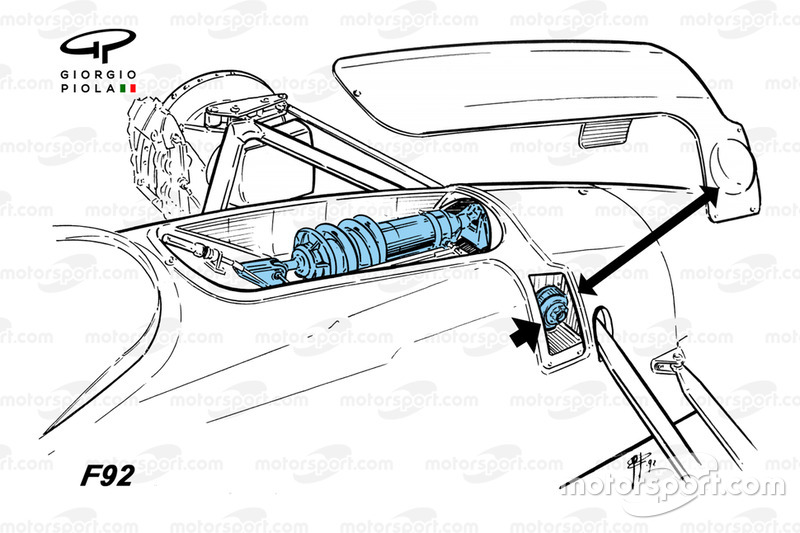 In that same year, the Dallara BMS had been fitted with the previous year’s Ferrari V12 and had higher maximum speeds. And a eureka moment came midway through the year.

Migeot adds: “They sent us to do a test on a high-speed track with Jean Alesi, in the presence of Sante Ghedini to find out why we could not reach a good top speed.

“They mounted the engine from the year before on the car: Alesi understood immediately that it felt like another car with more horsepower…” 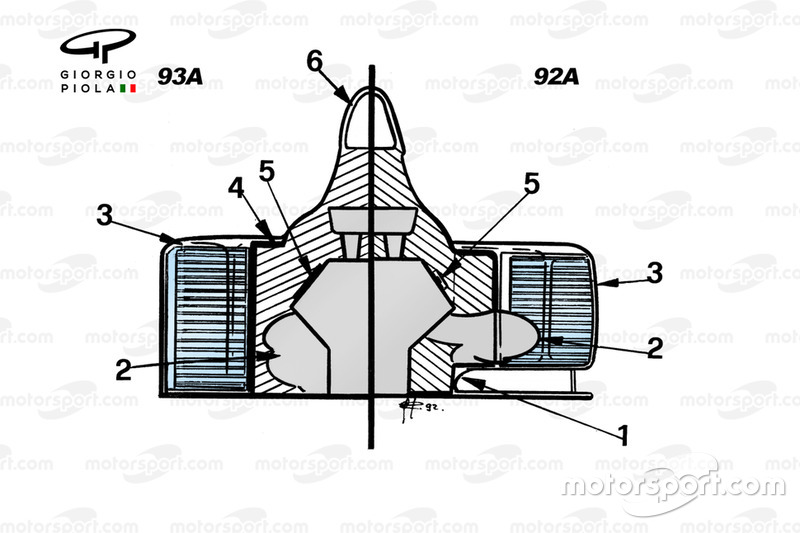 Comparing the 92A and 93A we can see how the exhausts had to be raised to accommodate the double floor arrangement, whilst the radiators were wider to make up for their lack of height.

The car actually had a lot of downforce, something that it displayed in the wet, as described by Migeot.

“We gave a demonstration of the car’s ability at Magny Cours when it started to rain. Everyone was on track with slicks, but Jean was the last to return to the pits for the tyre change, as the F92A had a lot of grip, even in the wet”. 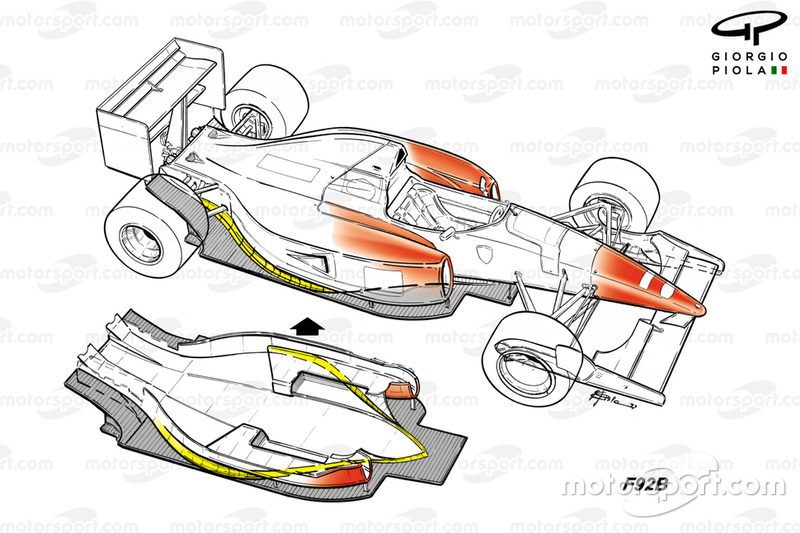 Migeot also explained that whilst Ferrari knew the car delivered good downforce, its attempts to understand and develop the car only made things worse.

For example, it created a version of the double floor to verify that the car’s instabilities were not at fault for its difficult behaviour.

Then, it was decided to equip the car with a transverse gearbox. Migeot said: “It was more compact, but also wider, so it ruined the passage of flow in the two channels. In short, we were going slower and slower. 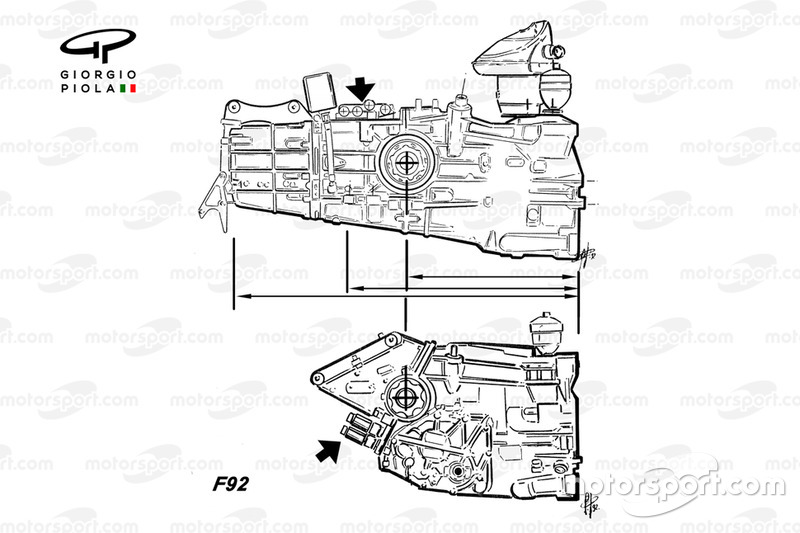 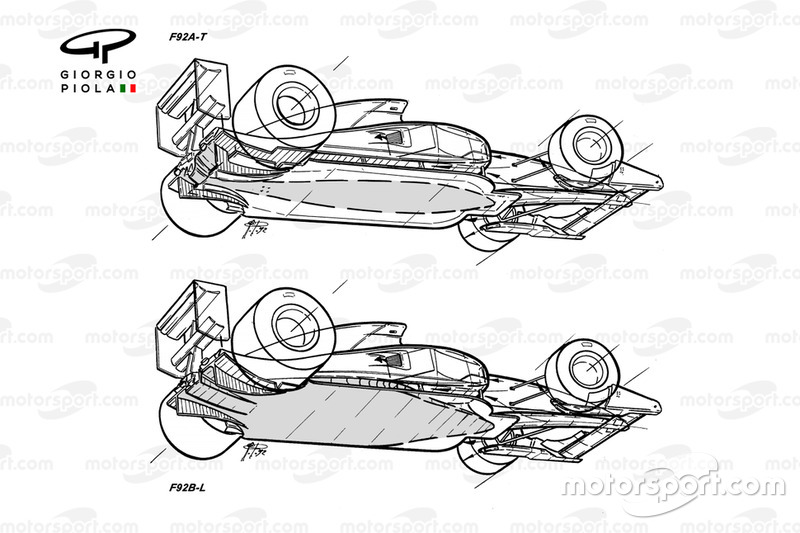 “It was a great disappointment because I became the scapegoat of a situation I wasn’t managing. And it was a great shame because the F92A had a very long flat bottom that managed to generate a lot of load. It was a concept that had to be developed though. However, it was banned the following year by a change in the regulations.

“Ferrari has always lived in the myth of its engines, so there was no criticism of the V12s because it would have been like cursing in church. Although it seemed obvious to everyone that the engine was the big problem with the F92A, the blame was put on the aerodynamics”. 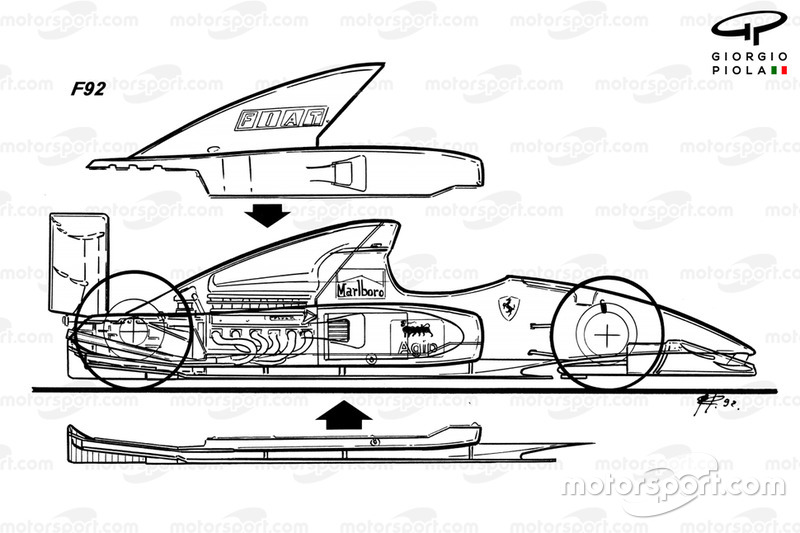 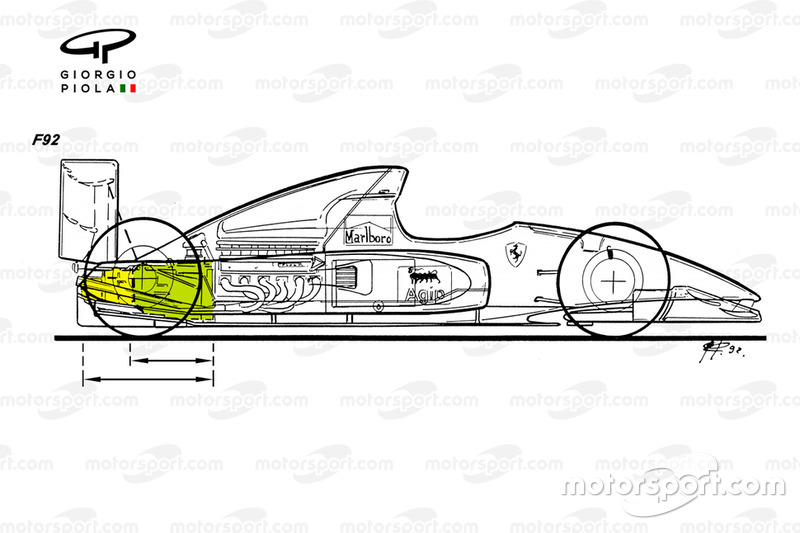 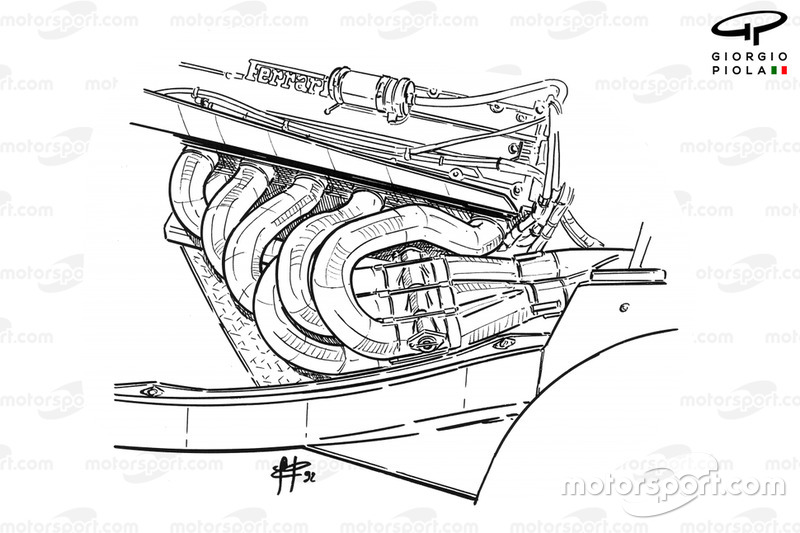 Exhaust layout of the F92A, which had to be higher due to the packaging restraints of the sidepods 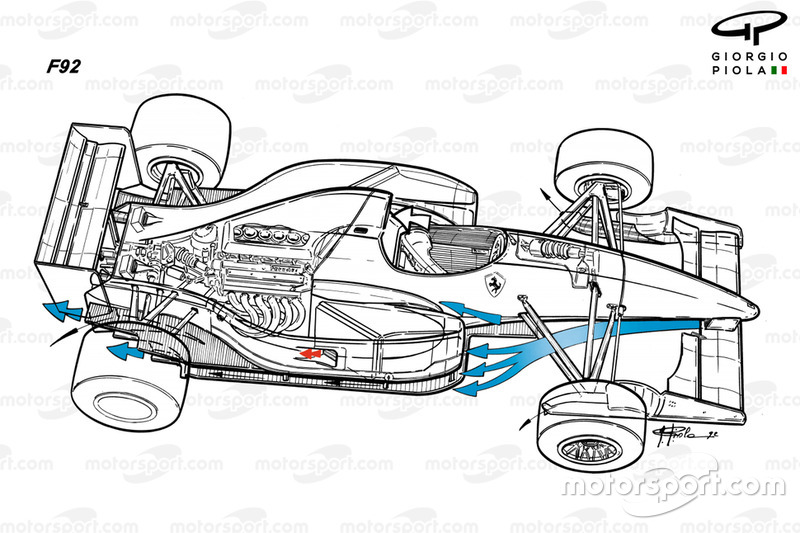 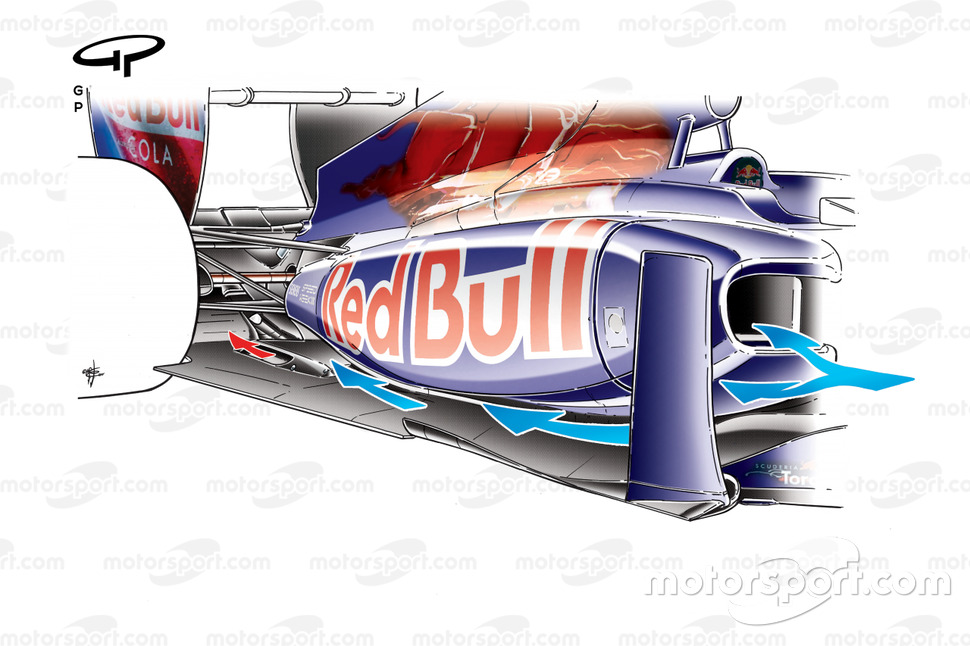 Interestingly the concept had a revival of sorts when Toro Rosso positioned its sidepods in a high position on the STR6. 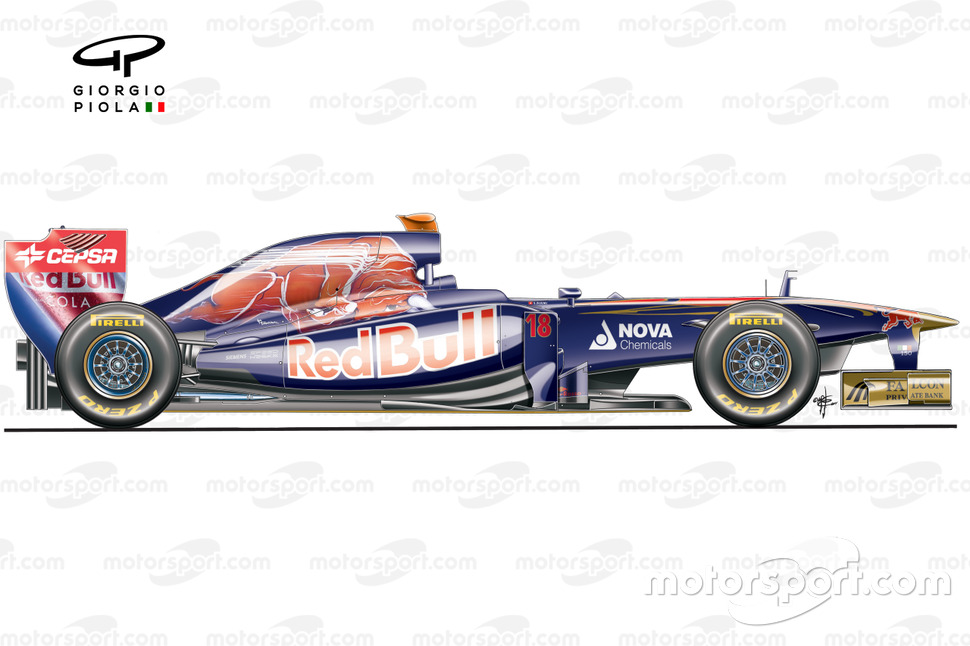 Side view of the STR6