Super Formula champion Nick Cassidy has described last weekend’s Okayama race as the “win that got away”, as he felt he had the pace to beat Sho Tsuboi to victory.

TOM’S driver Cassidy finished third from 10th on the grid, leading for much of the latter half of the race as he left his mandatory pitstop until the penultimate lap.

The New Zealander was locked in a virtual battle with Inging driver Sho Tsuboi, who chose to stop early and was then able to pass teammate Hiroaki Ishiura for the net lead.

But towards the end of his mammoth first stint Cassidy encountered lapped traffic, and when he finally came in for fresh tyres at the end of lap 48 of 50, Cassidy emerged just behind Tsuboi and Ishiura and had to be content with the bottom step of the podium.

“It’s a weird feeling,” Cassidy told Motorsport.com. “It’s a good result from where we qualified, but it was the win that got away, almost.

“We lost too much time with lapped traffic and a few extra seconds in the pits. When [Toshiki] Oyu came out of the pits he sat in front of me for a lap-and-a-half, that cost me 1.8s right there. When the race is long and you’re running that strategy, that time all adds up.”

Asked if he considered pitting as he approached traffic, Cassidy said: “Yeah, but then you’re stuck for the rest of the race. My pace was really good. Two laps before I pitted I did a 1m15.8s, 1m15.7s, with 45 laps on the tyres. I had to stay out and use that clean air.

“[The win] was on. I actually expected that Ishiura was in the box seat to win, but he pitted earlier than I expected. That put the win into our hands.

“I was monitoring the gap to Tsuboi, it got to 34 seconds but then it went down to 31 when I hit traffic… that’s life. But anyway, it was a good race.” 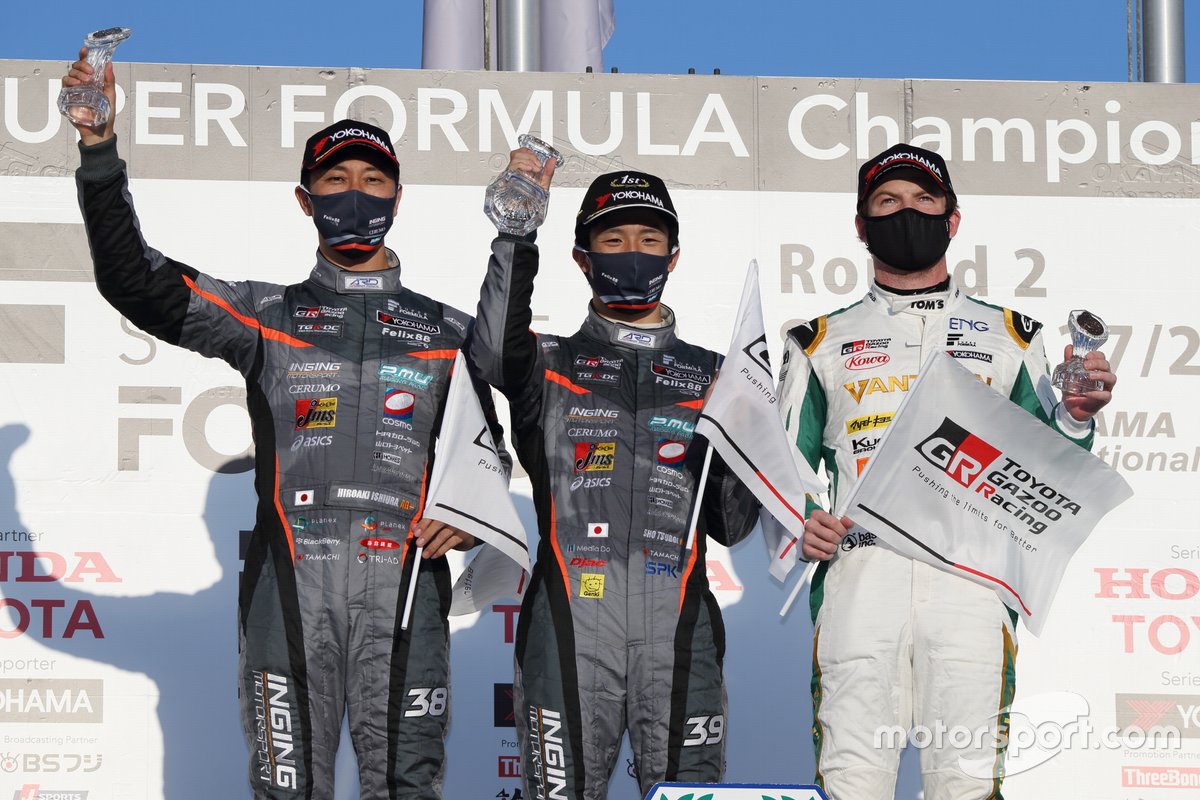 Tsuboi meanwhile was able to celebrate a first-ever Super Formula victory in only his ninth start in the category, an unlikely turnaround after he crashed at the end of qualifying.

That incident left him eighth on the grid, but a good start combined with a three-way collision at Turn 1 involving Sacha Fenestraz, Tadasuke Makino and Oyu left him second at the end of the first lap, only behind poleman Ryo Hirakawa.

Tsuboi pitted on lap 11, one lap before Hirakawa, and managed to pass the Impul driver with the help of his warmer tyres – repeating the trick on Ishiura almost 20 laps later.

“I knew that if I could do a good lap in qualifying, I could start from the top,” said Tsuboi, who failed to complete a lap of the season-opening Motegi race.

“That’s why I was so disappointed after I crashed, my heart was in tatters. I knew I was in good shape and I just wanted to focus on finishing the race, to feel the car without rushing, and hoping for a better result in the next one.

“But after turn one I knew I had a chance to win and I’m glad to have seized it.”

He added: “I knew the pace would be good for the first few laps after the safety car [deployed in response to the first-lap incident], and I thought it might be possible to jump Hirakawa.

“I was watching Hirakawa and he didn’t come in on lap 11, so I came in, and that strategy worked well. The tyre change was quick, which I think was key to passing.”