“(Almost five months) ago, Formula Drift was to have kicked of our 17th season on the Streets of Long Beach. Since then the world has been turned upside down,” said Formula Drift president and co-founder Jim Liaw on Friday. “But today we are finally here at World Wide Technology Raceway just outside St. Louis for the start of the 2020 Formula Drift PRO and PRO2 championships.” 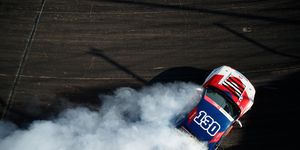 There were 29 starters instead of the usual 32 that used to qualify for the showcase PRO category, about half of them looking like new names. Notably absent was three-times-in-a-row champion Irishman James Deane and teammate Piotr Wiecek of Poland, both of whom are competing in Europe in the Drift Master European Championship this year because of the COVID-19 pandemic and all the troubles that ensued from it. But there was a strong contingent of returning players, including no less than four former Formula Drift champions.

The grandstands, which usually hold about 10,000 fans on what used to be a typical Formula Drift weekend, were limited by the St. Louis venue to 20 to 25% of capacity. Fans were spread out in little clumps on the aluminum seats but seemed to be enjoying the show nonetheless.

On-track competition was held on a purpose-designed course at World Wide Technology Raceway across the Mississippi from the St. Louis Arch, the same track that the weekend before had hosted the NTT IndyCar Series (the lawn art from IndyCar was still present as the drifters circled their own course). The Formula D course incorporated part of the big oval and a few long, snaking turns of the St. Louis infield road course. 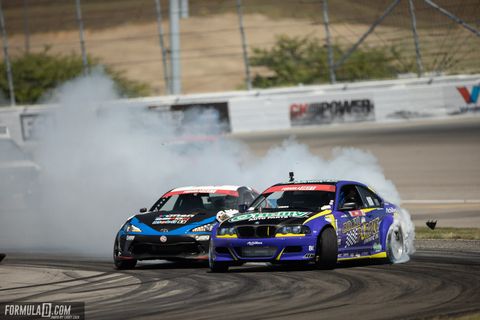 (As you may know, drifting is the art of sliding a car sideways door-to-door against a competitor through a series of prescribed turns. Runs are judged—like 1,000-hp pairs figure skating—based on “Line, Angle and Style.” Line is just what is sounds like, the route each driver takes through the course, better to use the whole track and get close to the edges as possible. Angle refers to the overall steering and slip angle that a driver uses. And Style is judged by how much each driver demonstrates initiation of a drift, fluidity and style. There are three judges and two out of three must agree to pick a winner of each two-car “battle.” If it’s too close to call, the judges may opt for a repeat run, known as “One More Time,” usually a fan favorite.)

The first day in St. Louis saw 29 drivers from eight different countries from Brazil to Norway, with many from the U.S. 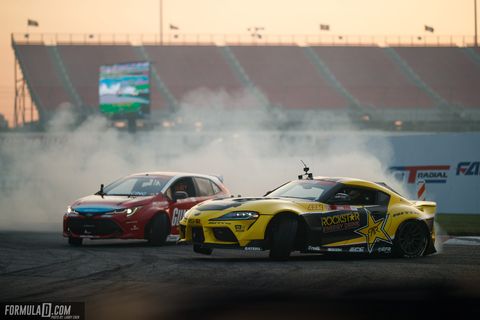 By far the dominant team on Saturday was the powerhouse Papadakis Racing from Southern California, which fielded a new Rockstar Energy Drink Gazoo Racing Toyota Supra for driver and former champion Fredric “The Norwegian Hammer” Aasbo. New Papadakis teammate, veteran driver Ryan Tuerck, got Aasbo’s old Toyota, newly dubbed the Gumout/Nitto Tire/Mobile1 Toyota Corolla Hatchback. The pair were so strong that they met in the final round, after beating all comers in their respective brackets. Tuerck’s Corolla had lost power steering in his semi-final victory over Dylan Hughes, and was handicapped going into the final against teammate Aasbo. Aasbo showed no mercy in the final round and took the top of the podium over his teammate.

Third place went to Odi Bakchis after former champ Chris “The Force” Forsberg was unable to repair his damaged Nissan 370Z in time to make the third-place runoff against Bakchis.

Sunday was another sunny day in St. Louis, with just the right amount of breeze to blow all the tire smoke away. Aasbo was knocked out early Sunday by Corvette driver Matt Field from San Jose. Field advanced as far as the semi-final round before being knocked oubumped offt by the RTR Motorsports Mustang of Chelsea Denofa. Denofa then met the Hoonigan AutoFocus Nissan S15 of Aurimas “Odi” Bakchis, who himself had just knocked out Tuerck in the semis. 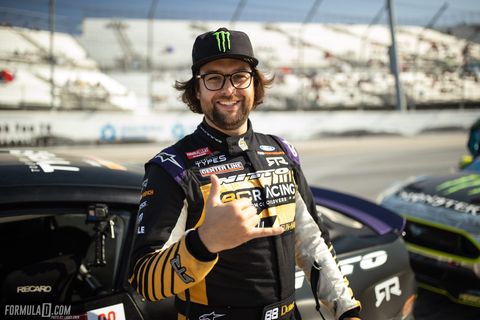 Sunday’s final round between Bakchis and Denofa went so smoothly, with both drivers making a minimum of mistakes, and sliding their cars so perfectly parallel to each other, that long-time Formula D announcer Jarod DeAnda called the two drivers, “…good, clean, sterile surgeons of the track.” But the judges said it was Chelsea Denofa who was judged the more precise in both runs. (In Formula Drift each round of competition is done in two runs, with one driver leading the first run and then “chasing” in the second.)

“He (Bakchis) is super smooth in front,” said Denofa. “I knew it was going to be a good chase and I chased as hard as I could and did as good a lead run as I could.”

Which was good enough for Denofa’s first win since last year at Texas. 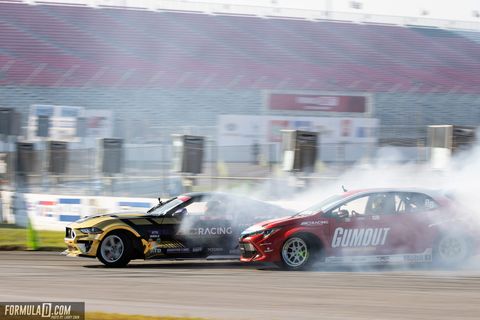 The next round will be in Monroe, Washington, just outside of Seattle, Sept. 25-27, followed by rounds in Dallas Oct. 16-18 and Irwindale Nov. 20-22. That’s four stops total to the usual seven or eight. But it’s an unusual year.

“To say the last six months has been challenging is an extreme understatement,” said Liaw. ”The daily changes in the world, the pivoting the Series have had to make, the fires that we had to put out and the sacrifices people had to make has been all but overwhelming. By no means are we in the clear, there is still a lot of work ahead.

“Today is not victory day as in, we won, it is complete, we are in the clear but it is a victory. The fact that we have Formula Drift cars on a race track is already a feat onto its own. To all the fans that have been cheering us on, the media that keep supporting us with great content, the teams that have persevered, the sponsors that kept their faith, the family & friends that kept us going and the staff in & out of the office for their hard work…. just wanted to say THANK YOU!!!”

This Cyberpunk AMC Gremlin Is Really a BMW Z4 Underneath

1986: Would You Rather Carry a Civic Body or Drive a Plymouth Colt?
Car Reviews