There’s three more GT Sport Daily Races to get to grips with this week, and there’s a bit of a thematic spread.

Unusually, two of the three races are one-make events — you may only choose one car for the race. This covers Race A and Race B, both of which feature N-class road cars… sort of. It’s Race A where that definition is a bit fuzzy, as you’ll be using the N200 category Mazda Roadster Touring Car which is quite clearly a race car, complete with big wing, snappy race transmission, roll cage and barebones interior.

The little Mazda heads to Tokyo Expressway’s South Outer Loop for a three lap race. This is the version that doesn’t include the triple right-hander through the containers, but does have a rather nasty chicane in the final sector. Expect penalties, dive bombs, and airborne Mazdas. It’s worth noting that the car is specially provided, so you can only pick your preferred color — there’s seven — and it’s a grid start, though without the fun of a false start check.

Race B’s road car is more like a road car in name only. The Porsche 911 GT3 (997) ’09 is a homologation model, or a car designed specifically to meet production numbers in order to qualify the chassis and body for certain race series. Nonetheless, and unlike the Mazda, it’s a fully appointed road car you could buy from dealerships back in 2009. For the race, all you need to do is pick the car from your garage — liveries are permitted — and head to the Nurburgring Nordschleife for a lap. The key here is to survive.

There’s quite a bit more pace in Race C, which takes your favorite Gr.3 cars to Monza. It’s a ten-lap event, with a tire use twist that sees both Racing Hard and Racing Medium compounds as mandatory. That means that you’ll need to pit at some point to change from one to the other, and, given Monza’s heavy penalty for not being in the slipstream, that could make for some odd strategy calls.

These three races will run through to Monday, April 20, when another new set of three will replace them. 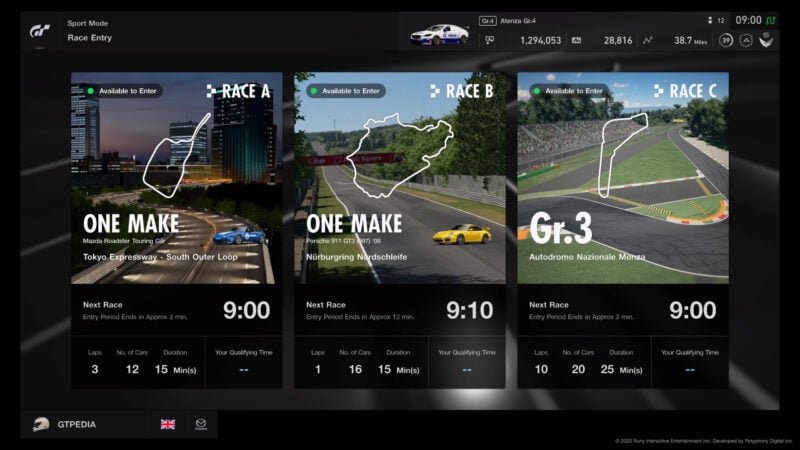