Lando Norris is a busy man. When he’s not hauling in the points in a Formula One car, he’s streaming on Twitch, where the 21-year-old just went over a million followers despite being in the middle of the most gruelingly long F1 season ever. And if he isn’t doing that, he’s becoming the CEO of his own content brand, or, as he told me last week, sneaking off to the new McLaren esports studio on his breaks from actual simulator work. It’s sort of come as a shock to the sport, especially in a team whose factory you couldn’t enter without a tie on five years ago; now, McLaren’s selling out of branded hoodies.

F1 is a weird world, between the screaming, cutting edge-tech that seems impossible to manage and a surprisingly old-school ethos that resists change, and Norris understands that tension. He isn’t really anything like F1’s aggressively glamorized (and pretty fictional) past—for someone who’s third in the drivers’ championship currently, he’s impressively humble. He lives 30 minutes from McLaren’s factory and leads a pretty average lifestyle, horrible training regimen aside. But he is going to be part of the sport’s future, so after the 2022 F1 chassis got unveiled at Silverstone a fortnight ago, it seemed like a good time to ask him about where he sees F1 going this decade. 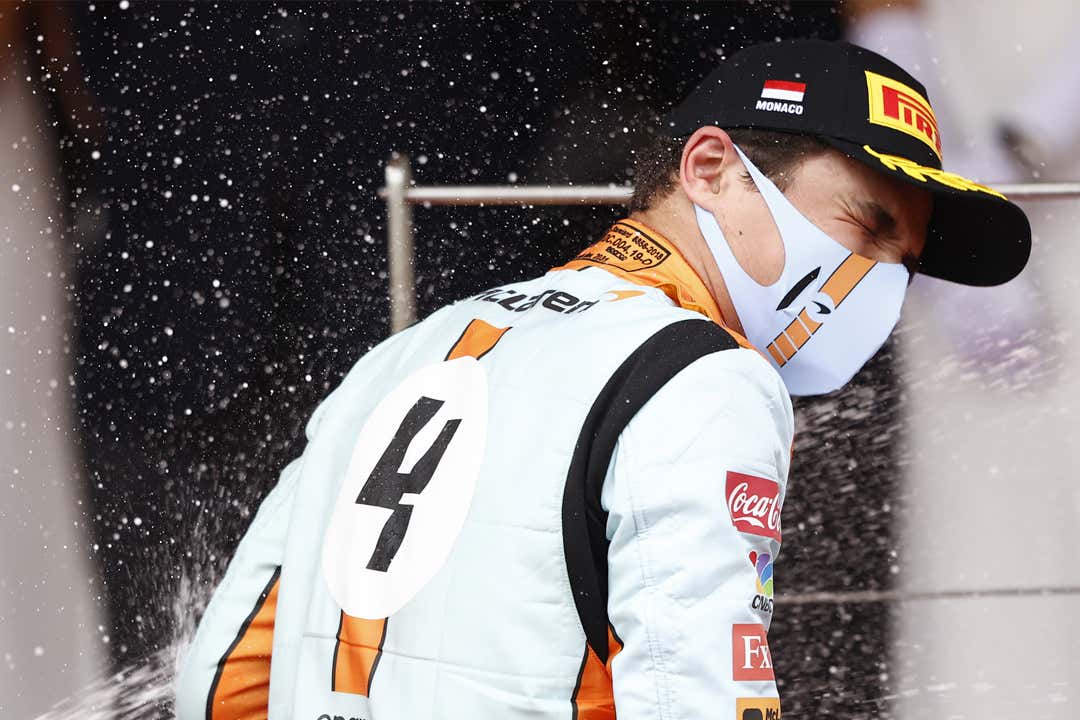 “Well the whole idea of next year’s car is to create better racing. Hopefully better for us to drive and race each other much closer, more frequently, maybe racing at tracks we’ve not been able to necessarily race at because it’s basically impossible,” Norris said. “And all of that is for entertainment and for people who come and watch to enjoy it more and see more action, more chaos and things like that. So first of all, that’s the main thing: are the people watching it, enjoying it? Are we putting on a good enough show? Because in the end, it’s a big show, like that’s what Formula One is.”

The “show” in F1 has been one of its main problems for the better part of a decade. The cars are incredibly fast by any standard, but a lack of overtaking has frustrated existing fans. The series has also been slow to adopt things like streaming, until Drive to Survive proved if you put the stuff out there and make it exciting, people will get involved.

Norris acknowledged the balance was tricky. “But as drivers, we also want to enjoy it. And we want it to be a cool car to drive; we still want it to be the fastest car in the world to drive, which it is now.”

Although he’s already in his third season, Norris is still the second-youngest driver in F1. So when he’s thinking about the future, it’s not just the 2022 regulations, it’s the next decade-and-a-half (or more) of major changes. These will include a massive electrification push in the automotive industry, mirroring other tectonic shifts happening in the world around us—namely, the climate.

Norris is acutely aware of that. “Of course, when you have a lot of the environmental side of it and there’s a lot of resources and time and effort being put into that by Formula One’s side, but also from us as McLaren with all the recycling, with the whole environmental side, trying to do as much as we can to kind of equal out what we’re doing as a sport that is F1.”

F1 definitely isn’t the worst offender when it comes to sports. The series estimates it generated 282,800 tons of CO2 emissions over the 2019 season; the year prior’s World Cup generated 2.4 million tons.

“Even though, as Formula One, we do a lot less environmental impact than what a lot of other sports do, because we drive cars everyone thinks we’re way worse than every other sport in the world, which is not true,” said Norris. “But of course, the more friendly we can be, the better. There’s a lot of effort with things—Formula One has said they’re trying to reach [carbon neutrality] by 2030 and they’re really trying to make sure they hit all those goals and targets.”

Trying to lessen that impact doesn’t have to be at odds with the sport, though. After all, the younger (and yes, some of the older) drivers definitely care about it. There’s an opportunity to make sustainability seem cool.

“Being a sport that demonstrates we’re trying to lead the way, we’re trying to do better things for the world, but then also being one of the most enjoyable, coolest sports in the world to go and watch and go visit,” Norris said, on what F1 had to prioritize for a properly sustainable future. 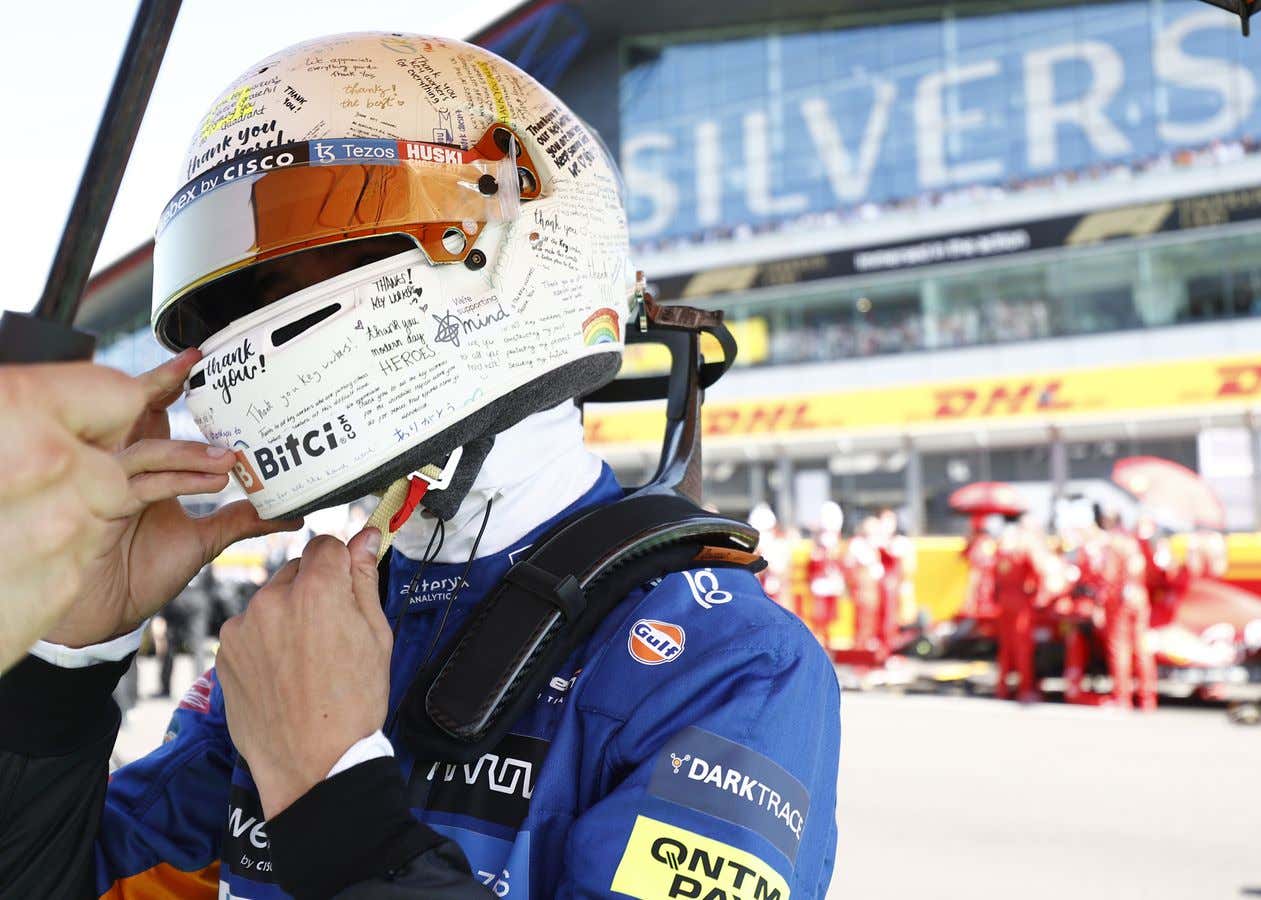 When it comes to the right-now of F1, Norris is just as important of a voice as the two who are ahead of him in the championship. As for the future, he’s key, and his input deserves to be heard given he likely has more than a decade of top-level racing in store. Should he keep it up, he’ll only become a more familiar face globally. The series could always use more than one or two.

From Track Days to a Factory Seat: The Porsche Racing Pyramid, Explained