It was a good day to be a guy named Alex on Sunday if you were a race car driver.

In NASCAR, Alex Bowman held off Denny Hamlin to win the Cup race at Richmond.

It was Bowman’s third win in as many seasons. Not bad for a guy who was Dale Earnhardt Jr.’s hand-picked replacement to succeed him in the No. 88 when Junior retired as an active driver following the 2017 season.

And then there was the other Alex—Alex Palou—the guy who won the NTT IndyCar Series season-opening race at Barber Motorsports Park. 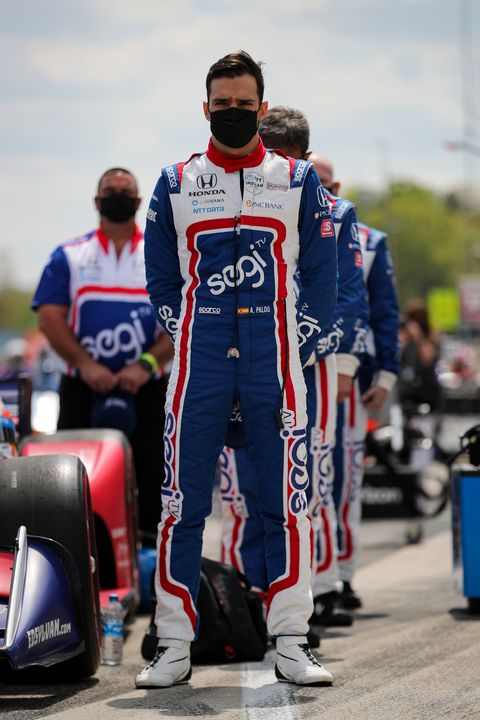 I’m sure that’s the response more than a few IndyCar fans had after Palou took the checkered flag.

The 24-year-old native of Sant Antoni de Vilamajor, Spain earned his first career IndyCar win—in only his 15th start in the series—paying immediate dividends to the faith team owner Chip Ganassi placed in him after being lured away from Dale Coyne Racing following his rookie campaign last season.

Palou made all 14 starts last season, earned one podium finish and led just one race—for a grand total of just ONE lap led in total all season (coming in the season finale at St. Petersburg)—had an average race start of 12.3 and an average finish of 14.7, ultimately finishing 16th in the final standings in a COVID-19 shortened season.

Those are far from earth-shattering numbers, indeed.

Still, there was something Ganassi—one of the best judges of relatively undiscovered talent in all forms of motorsports over the last three-plus decades—saw in Palou that obviously very few others did.

I’m sure it came as a surprise to more than a few people when Ganassi announced during the off-season that Palou had joined his team and would drive the No. 10 Honda, joining defending and six-time IndyCar champ Scott Dixon as a teammate along with Marcus Ericsson and seven-time NASCAR Cup champ turned IndyCar rookie in 2021, Jimmie Johnson.

I know I was surprised. But then, I’ve known Ganassi for over 30 years and he’s one of the smartest men I know. His uncanny ability to pick up drivers others wouldn’t even give a second thought to is nothing short of legendary. He’s made more stars in NASCAR, IndyCar, IMSA and other series than pretty much any team owner other than maybe Roger Penske.

The Chipster just has an incredible knack.

And while so much prerace and in-race focus and attention was on Johnson, Palou quietly and without drawing a whole lot of attention to himself, emerged at the end of the 90-lap race with the checkered flag.

What a surprise, right?

There was just something about the way Palou performed all weekend in practice, and then qualified third, that served as somewhat of a precursor to what potentially may come in Sunday’s race.

He kept himself in the top-5 for much of the event, took the lead for the first time on Lap 42 and held it for the next 19 laps, shuffled back a bit afterward, only to regain the lead seven laps later on Lap 67, never to relinquish it again.

Palou admittedly got some help when he took the lead for good when pole-sitter and race leader at the time, Patricio O’Ward, made a costly mistake that allowed Palou to slip by him and march onward to victory.

Even though O’Ward was around Palou all of last season and was not a stranger to what the Spaniard could do behind the wheel, let’s face it, it’s very likely that one of the last people O’Ward would expect to pass him for the win would be Palou. 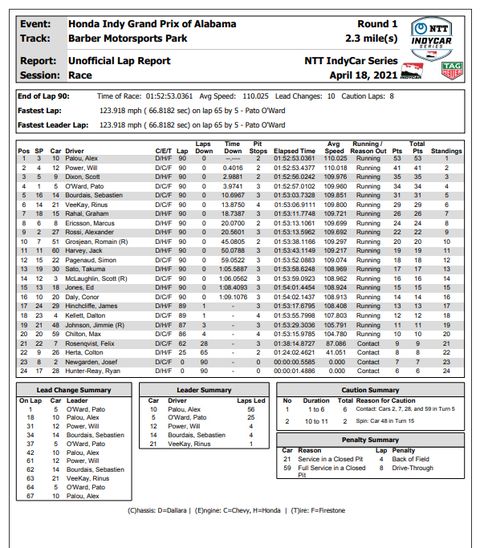 But Palou? I mean, come on. WHO saw that coming?

Now, there are likely going to be some naysayers or non-believers who are calling Palou’s win a freak occurrence, a lucky break for a guy who had very little luck as an IndyCar rookie last season.

But instead of racing’s infamous sophomore jinx, Palou began his second full season in IndyCar in the best way possible. And it was no freak deal.

On the contrary. Not only did he leave Birmingham as the points leader in the NTT IndyCar Series, Palou is a name that will now have to be reckoned with going forward.

He’s driving for a team that is accustomed to success: Chip Ganassi Racing has won two of the last three IndyCar championships, three of the last six, four of the last eight and eight of the last 13 season titles—won by either Dixon (five of his six crowns) or Dario Franchitti (three in a row from 2009-2011).

I was impressed with Palou’s car control, his coolness under pressure—particularly holding off the late-race surge by Power—and how he didn’t call any attention to himself on the racetrack until he celebrated in victory lane.

Who is Alex Palou? We may not have known him very well before Sunday, but we sure do know about him now.

And we’re only going to get to know him and hear more about him a lot more from here on out.