Up until now, Nashville has always been a NASCAR city.

Sure, two-time IndyCar champ Josef Newgarden is a native of Hendersonville, a Nashville suburb. But that’s about it when it comes to equating Nashville with an IndyCar stronghold.

Rather, Nashville has long been a NASCAR town. Country music fans—and performers—alike love ‘em some stock car racing. It’s practically in the DNA of those born and raised in, or those who eventually move to, Music City.

But this weekend’s inaugural Big Machine Music City Grand Prix stands ready and prepared to change all that.

Just a few weeks after NASCAR returned after a long, long time to Nashville (at Nashville Superspeedway, about 30 miles away from downtown), IndyCar is throwing one of the biggest parties it has ever thrown for an inaugural event.

When I spoke with him recently, IndyCar driver Pato O’Ward—currently No. 2 in the standings—made it quite clear just how significant and important Nashville will be not only this weekend, but for many more years to come, to the open-wheel race series.

“I feel everything that’s gone into the Nashville event is probably as big or second to the (Indy) 500,” O’Ward said of the vibe in and around Music City for this weekend.

While not wanting to put the cart before the horse, given that a lot rests on IndyCar’s debut in the capital of country music, but from what we’ve seen thus far, Nashville has the potential to truly become one of the most popular races and destinations going forward for the series.

After the iconic Indianapolis 500, the most popular race—or more precisely, the most popular street course race—has long been the Long Beach Grand Prix. Sure, say what you want about the popularity of events at places like Texas Motor Speedway or Belle Isle in Detroit, but Long Beach is kind of the penultimate in popularity behind Indy.

Now, Nashville has the potential to ultimately equal – if not overtake – Long Beach, or at the very least, become the East Coast equivalent of Long Beach.

Current IndyCar driver James Hinchcliffe recently told the Indianapolis Star, “You have a town that knows how to have a good time, that knows how to promote events and throw parties, and they’ve absolutely knocked it out of the park. I haven’t seen buzz around a new event like this, well, ever, I don’t think in my career.

Newgarden has been a key presence. He moved back to his hometown roughly two years ago after getting special dispensation from the Pope, aka the Captain, aka team owner Roger Penske, who has long preferred to have his drivers live in the Charlotte, North Carolina area, to be close to Team Penske’s headquarters in suburban Mooresville, N.C.

Simon Pagenaud, Will Power and team newcomer Scott McLaughlin all live in the Charlotte area. Former Team Penske driver and four-time Indy 500 winner Helio Castroneves was the only team driver in recent memory who was allowed to live outside Charlotte, preferring to call Miami, Fla., home.

And while this weekend’s race has been a couple of years in the making in terms of preparation, Newgarden’s address return to the Nashville area certainly helped further legitimize the sport’s decision to also move there. To say the least, his photo likeness is all over Music City on billboards and the like.

Frankly, everything seems to have gone so smoothly leading up to this weekend that I wouldn’t be surprised whatsoever if Newgarden puts a cherry on the cake by becoming the event’s first-ever race winner.

It would almost seem fitting. 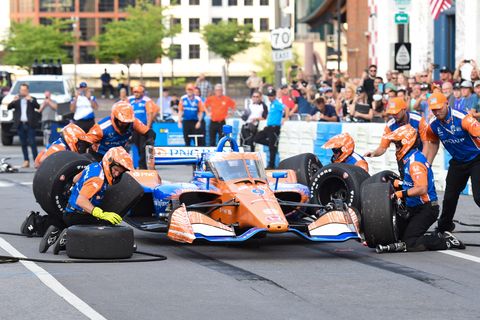 This weekend marks the first street race IndyCar has added to the circuit since the disastrous Grand Prix of Boston, which was slated to be held on Labor Day weekend in 2016. But a combination of residents’ vehement opposition, as well as a number of political and planning snafus and ultimately criminal fraud charges (and a $4-plus million judgement in favor of IndyCar), forced cancellation of the event in late April that year, causing the series to punt and cobble together a substitute event at Watkins Glen International.

And before that, street races in locales such as Baltimore, Houston, and Sao Paulo, Brazil all had short-lived lifespans. A planned successor to Sao Paulo in Brasilia, Brazil, was cancelled a month before it was to take the green flag,

Street course racing in IndyCar lineage has been one of the most popular trends the sport has seen. In addition to Long Beach, the traditional season opener in St. Petersburg, Fla. (although due to Covid, it hasn’t been the season opener last year or this) and Belle Isle, let’s not forget the extremely street course event held yearly north of the border in Toronto (although it also hasn’t been held last year and this year due to COVID-19 ramifications).

And even though it was held on a landing strip—as opposed to street course layout—at Burke Municipal Field in the shadows of downtown Cleveland, a venue I periodically hear about the series potentially returning to some day.

The way I see it, IndyCar has needed a venue like Nashville for a long time—and Music City has needed an event like an IndyCar race for an equally long time. Frankly, I will not be surprised if the open-wheel event out-draws—make that significantly out-draws—the Cup race recently held at Nashville Superspeedway on June 20.

Published estimates suggest there may be as many as 60,000 fans who will attend Sunday’s race, while estimates from June’s Cup race hovered in the mid-to-high 30s, attendance-wise.

Nashville is well on its way to becoming an IndyCar town, there’s no question. But this isn’t just about Nashville, either. You can bet your bottom dollar that a lot of other cities around the country will be paying close attention to the success of this weekend’s parties and ultimately, the race.

With IndyCar’s rumored hope to eventually expand to a 20-race season within the next 2-3 years, there are a number of cities that could potentially raise their hand and ask to become part of the IndyCar street course parade. Towns like Chicago, New York City, Orlando, Atlanta, Las Vegas (even with Las Vegas Motor Speedway only 15 miles away from downtown) and potentially even Phoenix (or Tucson) may seek to hop on the street course race bandwagon.

There’s just a special kind of vibe and excitement with a street course race that just doesn’t have the same tenor in a road course or oval event. This weekend’s event has all the makings of being a grand slam home run for IndyCar, leaving just one question remaining once the checkered flag falls:

“Why did we wait so long to race here?”