Suzuki’s Joan Mir says he will “never forget” his pass on Valentino Rossi to take third in the MotoGP San Marino Grand Prix on the final lap.

Mir was eighth at the end of the opening lap at Misano on Sunday and was still over two seconds adrift of the podium in sixth by lap 17.

As his Suzuki teammate Alex Rins began to battle Rossi for third in the latter stages, Mir was able to close in and capitalised on a mistake for the former going onto the final lap to move into fourth.

Mir then got on terms with Rossi and executed a daring move on the inside of the Tramonto right-hander at Turn 10 to steal third from the Yamaha rider.

The Suzuki rider admitted he was “sorry” to deny Rossi a home podium, but “will never forget” the move he pulled for his second MotoGP podium.

“Well, I’m very happy about today,” Mir said on Sunday. We’ve done a really good job, we gave our 100%. We never gave up the fight for the podium.

“In the beginning I was struggling quite a lot to have to the grip to follow the podium guys.

“Then when the tyre was getting a bit more used, I was able to have a bit more of stability in the fast corners and the lap times were coming easily.

“And then I start to recover distance to the podium riders. And I thought with this pace the podium is possible because Franco [Morbidelli] was already gone.

“Then I overtook Alex and the last lap with Valentino was so nice, something I will never forget, was a good manoeuvre.

“I am sorry for him because he did a really good job, really good race. But today was my day.”

Rins ended up just under two seconds from the podium in fifth, but says it was “impossible” to ride in the last three laps owing to arm pump he suffered on his right arm as he still lacks power in the shoulder he fractured and dislocated at Jerez in July.

“It’s a big shame to not be on the podium because sincerely we demonstrated the thing that we knew in FP4, FP2 – the rhythm was so nice,” he said.

“The first and second part of the race was perfect for me, we recovered the two seconds compared to Valentino.

“But when I arrived to him, I start to fight with him, trying to overtake him.

“But he was very smart, closing the door very well. At this moment, 10 laps to the end, I started to suffer with right arm pump.

“The last three laps were impossible to ride. In the end, my physical condition is not 100% yet.

“I’m not feeling pain on the shoulder but missing the muscle around the shoulder. And because of this, I was pushing a lot with the arm.” 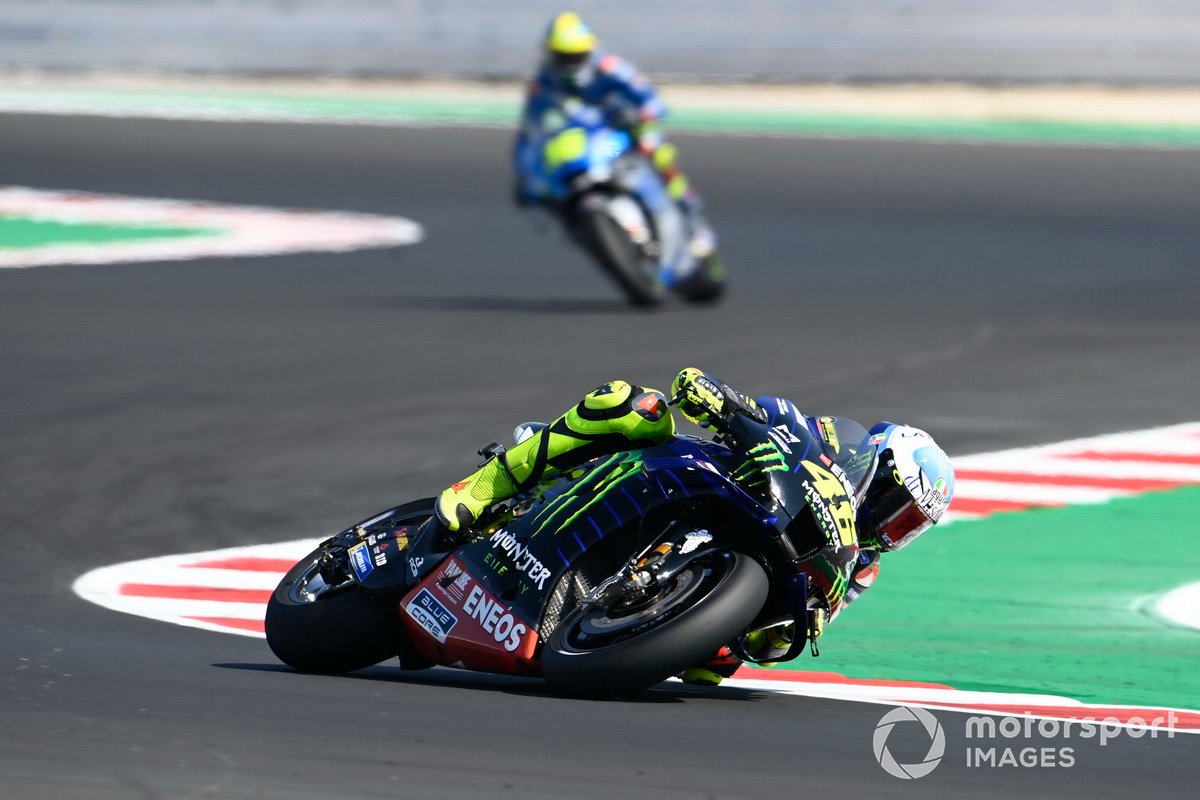 Verstappen getting 'sick of it' after double DNF