For the first time since 1995, NASCAR and Goodyear will conduct a rain tire compatibility test at Martinsville Speedway.

Kyle Larson of Hendrick Motorsports and Chris Buescher of Roush Fenway Racing will turn laps Thursday on the Virginia half-mile after it has been drenched using a water truck. The venue is currently hosting the first ever test session for all three manufacture-specific versions of the Next-Gen car.

At 0.526-mile, the paperclip-shaped track is the shortest on the Cup Series schedule, and the test will determine if racing could immediately resume on tracks one mile or less as soon as it stops raining. If successful, the tire would be used at Martinsville, Richmond, Phoenix and New Hampshire.

“I think the overall goal is anything we can do to speed up the drying process, regardless of the technology, to allow us to get back to racing more quickly is a benefit to the fans,” O’Donnell said. “We’re always trying to innovate, and you saw that with what we’ve done around the track-drying system and that’s worked out well. We’ve always looked at what’s the next iteration.

“If you’ve looked at what the teams have been able to do with more road racing coming into the fold, the idea of short tracks and could we work with Goodyear to find a tire that would allow us to get back to racing sooner under wet-weather conditions.”

All three NASCAR national touring divisions have utilized rain tires for road course events since they were made available in 2008. They were first utilized in the Cup Series in October during the playoff race at the Charlotte Motor Speedway Roval.

The performance of the rain tire on the oval portion of the Charlotte Motor Speedway circuit prompted conversations between O’Donnell and NASCAR CEO about the feasibility of a short track wet tire.

“We had a conversation with Goodyear and they’re on board as well, so I think that’s why the timing just lined up for us of let’s try to innovate, let’s try this and see what we can learn,” O’Donnell said.

Unlike road course races, O’Donnell said the goal isn’t to race in the rain at short tracks, but to return to competition as soon as the precipitation ends.

“It’s more so, can we get back more quickly than the track being completely dry, which is what we require now,” O’Donnell said. “That’s part of the test, looking at where’s the limit, where we would feel comfortable for the drivers.

“We want this to be safe, so that will be part of this test — talking to the drivers, what are they comfortable with — then obviously talking to Goodyear and (director of racing) Greg Stucker and his team about how they feel and how the tire performs, what if any tweaks we could make to that tire coming out of Martinsville, so there’s a lot that we’re hoping to learn here in terms of grip levels. Each track is unique, so this is something we’ll have to look at for multiple venues.” 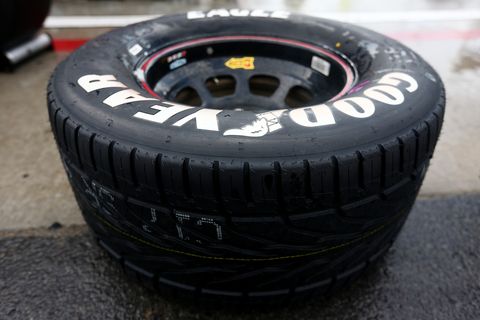 If the test is successful, wet condition short track tires could be made available as soon as this summer.

“Too early to tell, but I would say if this worked and we felt comfortable with it — and that would be both Goodyear and reaction from the drivers and teams — this is something we would look to implement as quickly as we could,” O’Donnell said. “We all know that if we can deliver a race on time or shorten those delays, that’s a benefit to the entire industry.”

And no, this isn’t an April Fools’ Day joke.

“It just happens to fall on April Fools’ Day. You can’t make that up,” O’Donnell said. “But no, this is a real thing and a real test, and we’ll be happy to report back April 2nd on how it went.”

The 1995 test also occurred at Martinsville and with the Hendrick Motorsports No. 5 team back when Terry Labonte was its pilot. That session came a month after NASCAR and Goodyear first tested wet weather road course tires at Watkins Glen International with Dale Earnhardt and Mark Martin.