No disrespect to the Pettys or the Earnhardts or to anyone in the Unser clan or to Big Daddy and his pals. Or, by the way, to Smoke Stewart. Or do-it-all Dan Gurney. But really now, people, can we get serious for a moment? Let’s look at the evidence.

The Case for A.J. Foyt

Four Indy 500 victories; one Daytona 500; one victory each in the 24 Hours of LeMans, 24 hours of Daytona, and 12 Hours of Sebring; 12 national championships in various USAC/CART classes; seven NASCAR Cup Series victories; 67 USAC/CART feature victories; one IROC victory but two championships; co-winner (with Andretti) of the AP’s Driver of the 20th Century Award; and except for NASCAR’s, membership in every meaningful racing Hall of Fame. 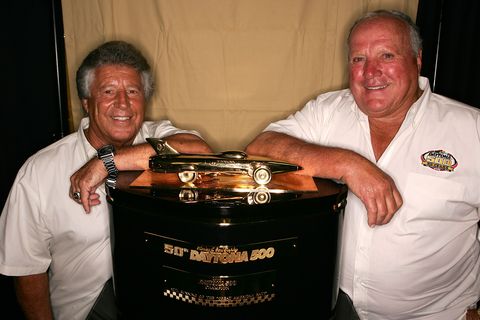 The Case for Mario Andretti

One Indy 500 victory; one Daytona 500 victory; 12 Formula 1 victories and the 1978 F1 World Driving Championship; three 12 Hours of Sebring victories; three IROC victories and one title; one Pikes Peak International Hill Climb victory; four USAC/CART championships; 52 USAC/CART victories; co-winner (with Foyt) of the AP’s Driver of the 20th Century Award; American Driver of the Year in 1967, 1976, and 1984; 111 total victories across seven series; like Foyt, enshrined in every meaningful Hall of Fame except NASCAR’s.

If Andretti has an edge, it’s those 12 Formula 1 victories and his 1978 F1 title. If Foyt has an edge, it’s his four Indy 500s, his endurance victories, and yes, those seven NASCAR victories. Except for one road course, all seven were 400- or 500-milers on major superspeedways.

The first came more than 57 years ago, in the July 1964 Firecracker 400 at Daytona International Speedway. Foyt, 29 at the time, was in a cherry-red No. 47 Dodge owned by Ray Nichels and led by crew chief Crawford Clements. He started 19th and barely avoided a first-lap accident when 17th-starting Reb Wickersham spun across his nose nearing Turn 1. Foyt went on to lead eight times for 14 laps in just his 10th career NASCAR start.

Astonishingly, he and teammate Bobby Isaac swapped the lead 16 times in the final 55 laps. Isaac had the better of it most of the time, leading 41 laps to Foyt’s 14. But Foyt made a last-lap, three-wide, low-side pass approaching Turn 3 to snatch the victory.

“It’s a heck of a feeling when you worry about two of your drivers getting each other in trouble,” Nichels said after the 160-lap, 400-mile race. “But it sure makes you feel good to know they’re running up front. That’s the best racing duel I’ve ever seen.”

Isaac and Foyt took the white flag together, with the lapped car of Paul Goldsmith (in relief of Jim Paschal) right with them. They went three wide down the backstretch: Foyt inside, Isaac in the middle, Goldsmith outside. They stayed three wide into Turn 3, where Foyt flirted with the apron to zip into the lead. He won the dash to the finish, arriving a half-length ahead of Isaac. 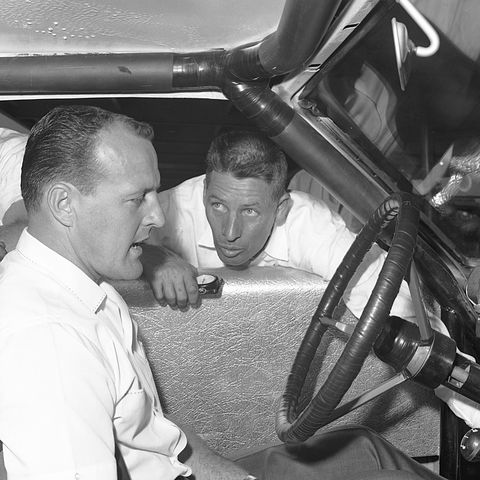 “I went way down, getting right to the apron, to pass Bobby going into Turn 3,” he recently told Autoweek. “Art Lamey of Champion (spark plugs) told me later that he’d never seen the numbers on top of a car until he saw my 47 in Turn 4.”

Foyt told reporters at the time: “I didn’t want to be ahead of him starting the last lap (and risk having Isaac slingshot by). I managed to get by before we hit the corner.”

Foyt won the next year’s 400 for the Wood brothers, beating Buddy Baker. He won the spring 1970 road race at Riverside, California, in a Ford from Jack Bowsher before getting his last four Cup victories with the Wood brothers: in 1971 at Ontario, California, and Atlanta, Georgia, and in 1972 at Daytona Beach, Florida, (he won the 500 by more than a lap) and back at Ontario.

Except for licensing restrictions, he would have run more NASCAR events. “The big ones I ran were all FIA-sanctioned,” he explained. “I couldn’t run the non-FIA races because I would have been barred from other series. I enjoyed the NASCAR races, but most of my time was with the open-wheel cars.”

There was a stretch between 1964 and 1972 when Foyt was almost unbeatable in his occasional NASCAR starts: seven victories, 21 top-five finishes, and 24 top 10s in 50 starts. Throw in 12 front-row starts and you have as impressive a stretch as any “outsider” has ever enjoyed. 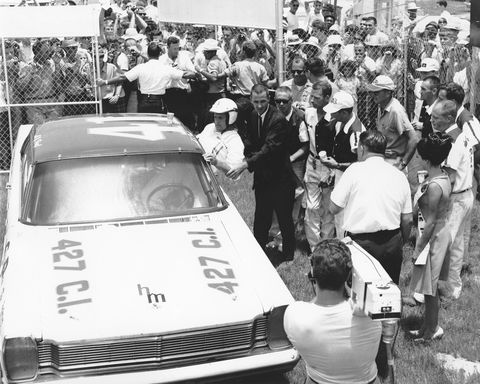 “We’re pretty proud of our record with A.J.,” said Wood Brothers Racing co-owner Eddie Wood. “We had him for 12 races during parts of 1965, then again in 1971 and 1972.” During those years, Foyt also raced for Banjo Matthews, Jack Bowsher, Junior Johnson, and Holman-Moody.

“He had seven poles, five wins, and was second, third, or fourth in five other races with us,” Wood said. “Except for two DNFs, he never finished worse than fourth.”

Foyt didn’t have a lot of NASCAR experience at that level, Wood said. “He’d run some USAC stock cars, but mostly he’d been in IndyCars and those light, quick little open-wheel cars. All of a sudden, he was in big, heavy full-bodied cars going really fast on big, paved, banked tracks with a lot of competition on all sides. When he came to us, it just worked out really, really well, sort of like when (David) Pearson came to us after A.J.”

Foyt’s NASCAR career faded after he and the Woods finished second to Baker at Texas World Speedway late in 1972. Between then and 1994 he made occasional starts for his own team and several owners. His NASCAR involvement ended with a disappointing 30th in the 1994 Brickyard 400. His final 20 years in stock cars were not especially noteworthy: zero poles, zero victories, nine top fives, and 13 top 10s in his last 71 starts.

• Grandson A.J. Foyt IV was a promising open-wheel driver before a dramatic career change. He did some drag racing as a teen, won the 2002 Indy Lights title, made some NASCAR Xfinity starts, and enjoyed success in sports cars and IndyCar between 2002 and 2010. Everything changed when he married into the Irsay family of Indianapolis Colts fame. He’s been part of its scouting staff since 2010.

• Foyt famously won the 24 Hours of LeMans in 1967, the only time he raced at the French track. Driving a Ford GT40, he did an extra stint after dark when co-driver Dan Gurney missed a scheduled driver change. All told, Foyt was reported to have done 16 of the 24 hours. He and Gurney led all but 90 minutes and won by four laps, almost 34 miles.

• Super Tex made news in 2005 and 2018 when he was attacked by Africanized killer bees on his ranch. Both attacks required overnight hospital stays, and the 2018 attack kept him from his induction ceremony into the Sebring Hall of Fame. That weekend was to have celebrated his final professional victory, with Bob Wollek, in the 12 Hours of Sebring in 1985.

Lando Norris: McLaren have 'work to do' to clear midfield