Jamie Little wants fans to see her as more than one of the most active and most popular pit reporters in motorsports television.

Little is that, and more. She is a ferocious fitness addict. She and her husband own restaurant franchises and a bakery. She has a son and a daughter. And, as frequent viewers know, she is an expert in the art of the ponytail.

But the biggest Little news is that she has completed her first season as lead play-by-play announcer for NASCAR’s ARCA Menards Series, making her the first woman to be the anchor of a nationally televised motorsports series. ARCA isn’t primetime in the motorsports world, but it’s a crashing through of the asphalt ceiling for Little, who has a resume’ that includes 20 years of racing broadcasts. 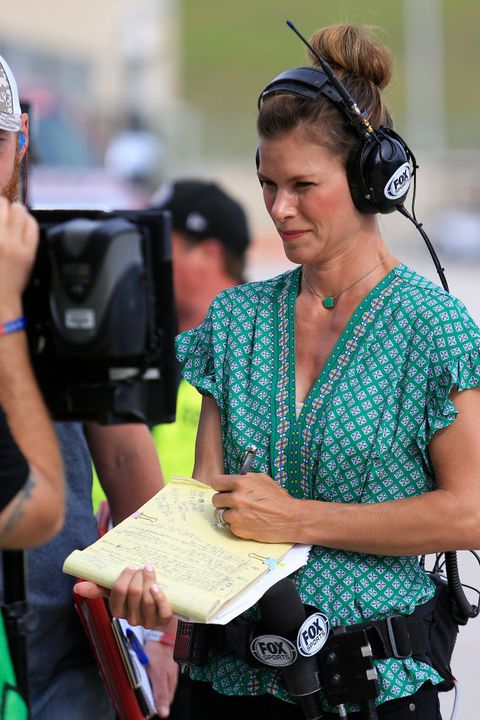 Perhaps best known for her role as a pit reporter for Fox Sports’ NASCAR broadcasts, Little, 43, jumped at the chance to move into the booth, where she and former driver Phil Parsons and guest commentators described ARCA action beginning with the season opener at Daytona International Speedway in February.

Little described the experience as “awesome and so much fun. It was very different than I anticipated and called for a totally different skill set. It left me wanting more. I hope that wasn’t the end to it.”

Little is respected along pit road for her level of preparedness and her ability to ask the right questions, even in tense moments. Navigating the noise and frantic nature of pit road and the garage area while trying to keep up with what’s happening on a racetrack that is mostly out of her sight and staying up to the minute with race changes is a challenge. Working in the booth, she said, offered its own test but wasn’t quite as busy.

“When you hear your producer, it’s almost like a security blanket. They have a good plan. I just need to execute.”

The idea of putting women in the anchor or starring role in sports broadcasts has been a slow train coming. Hannah Storm and Andrea Kremer worked the booth covering a National Football League game for Amazon Prime Video in 2018, making them the first all-woman NFL broadcast duo. Lisa Byington was named recently as the new play-by-play television voice of the NBA Milwaukee Bucks, replacing a man who had been in the job for 35 years.

Some outspoken male viewers (and not a small number of females) have objected to the concept of a female voice leading coverage of major sports events. That sort of blowback doesn’t bother Little, she said.

“I’ve always been the person who said just give me a chance and they’ll like me,” she said. “I’ve never been hung up on becoming the first woman to do something or on men pushing back or that it’s different because I’m a woman. I just kind of beat my own drum.

“I realized early on in this business that first you have to learn to have a thick skin.”

“I realized early on in this business that first you have to learn to have a thick skin. And second, not everybody is going to like you. Men might say I don’t want to hear a woman’s voice on sports TV, or women might not like the way I look. I’m a big believer in winning people over. And I’m a big believer in having the right person for the job and not putting somebody there because we need to fill this diversity role.”

Some regular travelers on the NASCAR tour remember when women were barred from garage areas. Even drivers’ wives and female reporters often faced issues getting through the gate before restrictions generally were loosened about 50 years ago.

Little has taken that movement to its literal peak—the speedway tower.