Watching Their Kids Compete Reminds NASCAR Stars Harvick, Busch Why They Like to Race

Kevin Harvick, the 2014 NASCAR Cup Series champion, has started another race team. He had one that fielded teams in the NASCAR Xfinity Series and Campinig World Truck Series for several years but folded that race team in 2011.

Now he’s at it again.

Before any aspiring young drivers go knocking on the door helmet in hand, you might just want to hold on. Because the new team Kevin formed has just one driver, and Harvick certainly isn’t interested in adding any more to the stable. That’s because that driver is Kevin’s son Keelen, who just turned 8 years old.

Prior to 2020, Keelen was just like any other non-racing youngster. That was until the COVID-19 pandemic shut down the world.

“When we started 2020, there were zero intentions to race,” Harvick said. “He was signed up for Little League baseball, going to school.”

The Harvick family spent the winter of 2019-2020 in Wyoming. They returned home to North Carolina, and, at first, life continued as normal. After the fourth race of the 2020 NASCAR Cup season however, it all changed. The series arrived in Atlanta in March. The pandemic was raging, sports leagues, schools and businesses were shutting down, and NASCAR followed by shutting down all racing on-track. After a few weeks virtual racing took hold and suddenly many of those same drivers seen on-track were virtually racing each other from their homes.

As a bored 8-year-old stuck at home, Keelen joined his father on the racing sims and soon the two were racing side by side. Then one day Kevin said Keelen looked over at him and said:

Keelen was indeed interested and soon was club-racing at the GoPro Motorplex, a karting track near the family’s Mooresville, North Carolina, home.

“He qualified on the pole for his first race,” Harvick said. “And really from that point on we’ve tried to evolve and keep up with his interests. And that progressed into starting to travel. We ran one of the national races there at GoPro, but we didn’t venture outside of GoPro until we got to the end of the year when I was able to go with him.”

“We’ve gone to different tracks,” Harvick said. “It’s been a really big evolution of really just acquiring the things that we need to race the way that I want race, which is unfortunate in today’s world just because of the fact that you see how you should race from a Cup side of things, and then you try to apply that into what you do.

“It’s been a lot of fun just to work with him,” Harvick said, before adding with a chuckle, “(the) father-son relationship has been a bit challenging to understand. … I think we’ve done a lot better with it over the last couple months, just in me being basically the driver coach and I tried to kind of step back a little bit from that, but I feel like pushing him, try to test his limits and push him to do things that he’s not doing and make him understand and hold him accountable when he’s not doing something right is important.”

So far this winter, Keelan won his first two national races in the SuperKarts! USA series at Homestead-Miami Speedway, and recently ran his first dirt race at Millbridge Speedway in Salisbury, North Carolina. Along the way Keelan has gotten help not only from Dad, but from his dad’s championship-winning crew chief in the NASCAR Cup series, Rodney Childers. Childers began his own racing career in go-karts and has been helping with the family effort.

“It was fun for me to mess around with,” Childers said. “And it’s going to be exciting to see his dirt career take off at Millbridge, which was a place that I ran my first race at, which is really cool for me. So hopefully that’ll get going and when they start back in March, we’ll have some fun with that.”

Keelan Harvick isn’t the only young driver whose dad happens to be a NASCAR Cup champion. Brexton Busch, son of two-time Cup champion Kyle Busch, is just a few years behind Keelan. At just 5 years old, Brexton, like Keelan, began his racing career during the summer of 2020.

“We went out and watched a race, and he liked it,” Busch said. “I said, ‘Hey, do you want to drive one?’ And he said yes. And we got him all fitted up and out to the track and let him borrow someone else’s car and drove it around and did well and kept getting better. So, I was like, well I guess we need to go buy one, so we did.”

Kyle said getting sponsors for his son’s racing effort wasn’t too difficult.

“We were just making a joke on social media about Brexton’s favorite colors being orange and green,” Busch said. “Low and behold we have sponsors popping up who were interested, so that was good because his racing was paid for.” 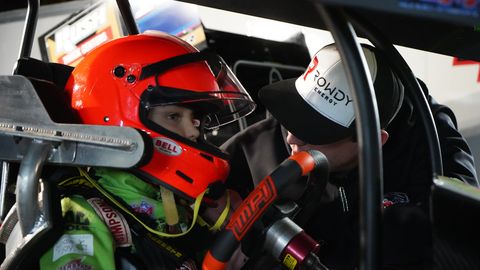 “We ran the second half of the year and he’s been able to win in his age group, which is cool,” Busch said. “There’s the cadet class, which is 5- to 7-year-olds, and then there’s a few classes for around 8 to 10 years old after that. Brexton has won four races in the cadet class in his age group, which is really cool and really fun to watch. We just got to keep getting better to be able to rock ‘n’ roll against the older kids and make a name for himself.”

For any parent who has a child that competes in organized sports, the joy of watching them compete is rewarding. But for those who take on all the obligations that come with being a full-time driver in the NASCAR Cup series, the reward goes a bit deeper.

“It’s really reminded me why I like to race,” Harvick said. “Seeing the kids and watching them learn and being able to do this with my son and in a time when so many people are trying to figure out where they can go and what they can do, racing has given us an outlet to do that in a safe way. And we took full advantage of that.”

“I raced go-karts against Kevin Harvick in 1986 in Garnett, Kansas,” McMurray said. “Thirty years later to have our two kids racing together and watching them talk and have these, you know, just friendships or conversations. It’s kind of cool, right? It’s pretty fun. And something that you, you know, 10 years ago, you didn’t see happening.

“It’s pretty neat to see all the guys, their kids are getting into karting. And, you know, I feel like my generation of NASCAR drivers, we all kind of came in around the same time. We all got married around the same time and we all started having kids. So, there’s a lot of them that are racing right now because they’re all around the same age.”

McMurray points out that the rewards of watching your child compete are different when you are a racer.

“What’s interesting is that my son plays flag football as well,” he said. “And it’s not that I don’t care. I want him to win, but if they don’t win, I just, you know, I pick up my lawn chair and I walk back to my car. But when we go to the go-kart track, it’s something that I feel like I can really help him with. And then I can explain to him, and when you don’t have success, it’s really frustrating. And, and there’s just … a big difference there.”

“We all want to see our kids be successful,” he said. “And being able to be right there with him when he’s having those successes is something that, as a dad, is those proud dad moments. But it’s also really rewarding because it’s not only are you just watching him be successful, you’re also a part of the process of helping them be successful. And you’re not just showing up and letting somebody else do everything.”

“It’s certainly way more nerve-wracking to be watching than it is when I’m racing myself,” Busch said. “You obviously want what’s best for your kid and you try to give him everything that he needs to be successful and some of the things to do and not to do. But he’s obviously still young, so he doesn’t listen to everything. But I think he’s progressed well so far.”

“It’s certainly way more nerve-wracking to be watching than it is when I’m racing myself.”

Just like the previous generation of NASCAR drivers, there are younger drivers entering the Cup Series. And those drivers too are starting to have kids of their own. Several weeks ago, 2018 NASCAR Cup champion Joey Logano posted a short video on social media of his own son Hudson turning laps in a go-kart on the dirt. So might we see the young Logano racing competitively alongside Brexton Busch sometime soon?

“I think being a second-generation racer definitely adds some pressure to a young kid wanting to race for fun,” he added. “I want to balance that and make sure that it’s fun for him and something that he wants to do and not because he feels like that’s something he’s supposed to do because Dad does that. But I will say he enjoys it a lot.

“Every minute I’m home he wants to go drive his Power Wheels or his go-kart. He’s got this little electric bike, and he’s a maniac. It’s actually been kind of fun to watch him grow. Of course, I enjoy it. I’d be lying if I said I didn’t, but I don’t want to push it on him, either. If he says, ‘Daddy, I want to race,’ then we’ll go racing. But if he wants to play baseball or something—I think an organized sport is important for a kid just for growth—but whatever he wants to do, we’ll do.”

Report: Apple and Hyundai-Kia Close to Deal to Build Car in U.S.