The Porsche 911 RSR is back, gunning for glory in the upcoming WEC and IMSA seasons. Today, the newest iteration of Porsche’s GT race car was unveiled at England’s Goodwood Festival of Speed. This RSR is based on the 991.2-generation 911 road cars, rather than the 992-generation cars flooding your local dealerships. That makes sense. The outgoing RSR, based on an earlier version of 991 chassis, has achieved great success. Its achievements include wins in-class at Le Mans, Petit Le Mans, Sebring, and the six-hour at Watkins Glen. And that’s just in 2019.

Porsche aims to keep the ball rolling with the new RSR. Improvements are varied, and multitudinous; 95 percent of this car’s components are new. Just the headlights, brakes, clutch, driver’s seat, and some suspension components are shared between the new RSR and its outgoing sibling. 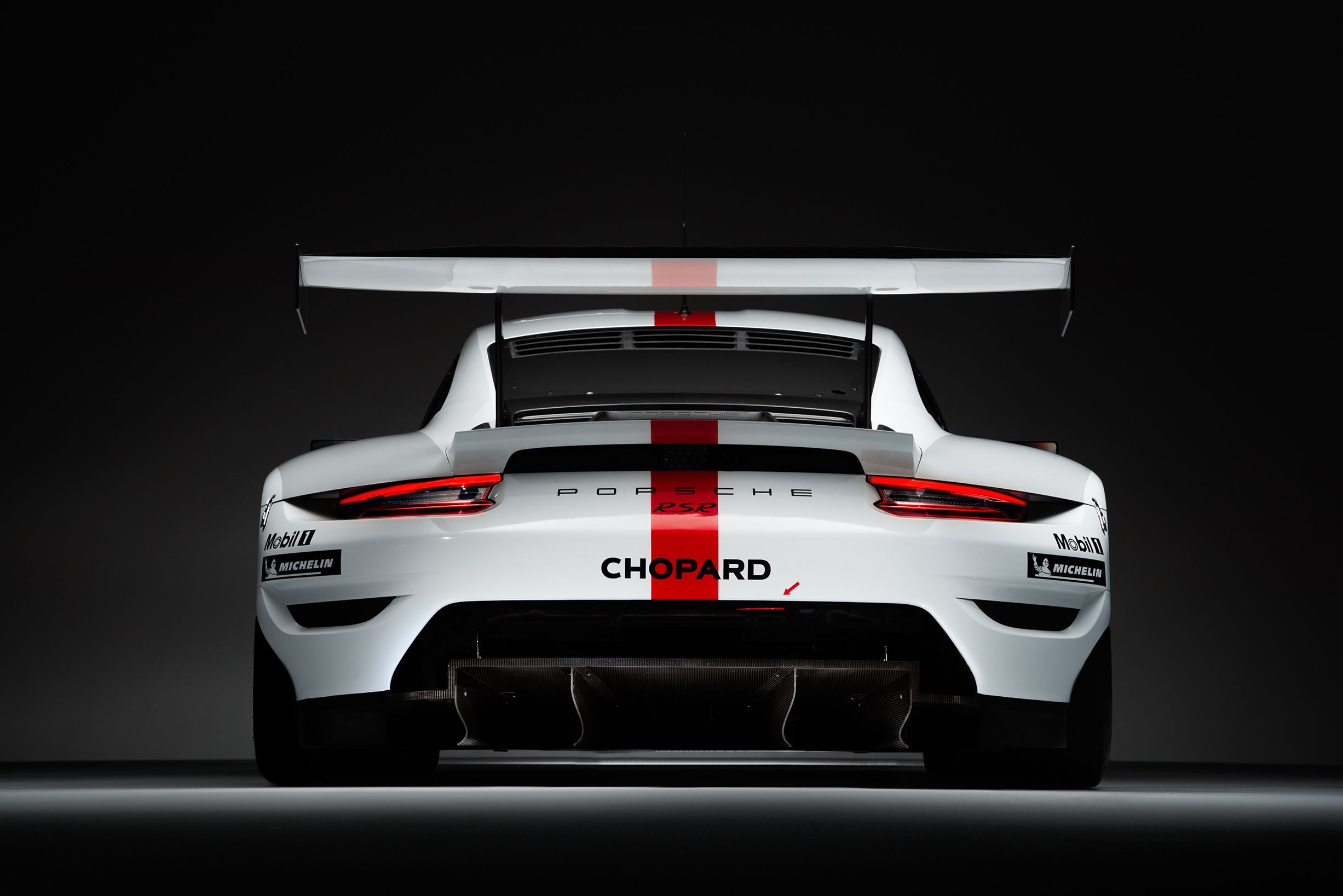 A new engine headlines the changes. The mill is a 4.2-liter flat-six – the highest-displacement boxer engine ever fitted to a factory 911 race car. As with the outgoing car, the engine sits just ahead of the rear axle. To some, this seemed like heresy when the last RSR debuted. ‘911s are supposed to have engines in the back!’ More than 20 WEC class wins changed dissenters’ tunes on that front.

The new engine will develop around 515 horsepower, but output will be affected by Balance of Power regulations in both series. The extra displacement will improve drivability, Porsche claims, while a new side-exit exhaust, routed just ahead of the rear wheels, saves weight. Sounds the business too.

During a quick blast up the hill at Goodwood, the note blasting from those side pipes racked my ribcage with basso growl. But there was still plenty of that classic 911 soundtrack after the car had passed – rumbling down low, followed by a hoarse shout as the 4.2-liter six revved out to its 9,000-rpm limit. Despite the many changes, the 2019 RSR’s engine retains its natural-aspiration. Even as displacement has grown with time, the audible identity remains palpable. Thank you, Porsche. 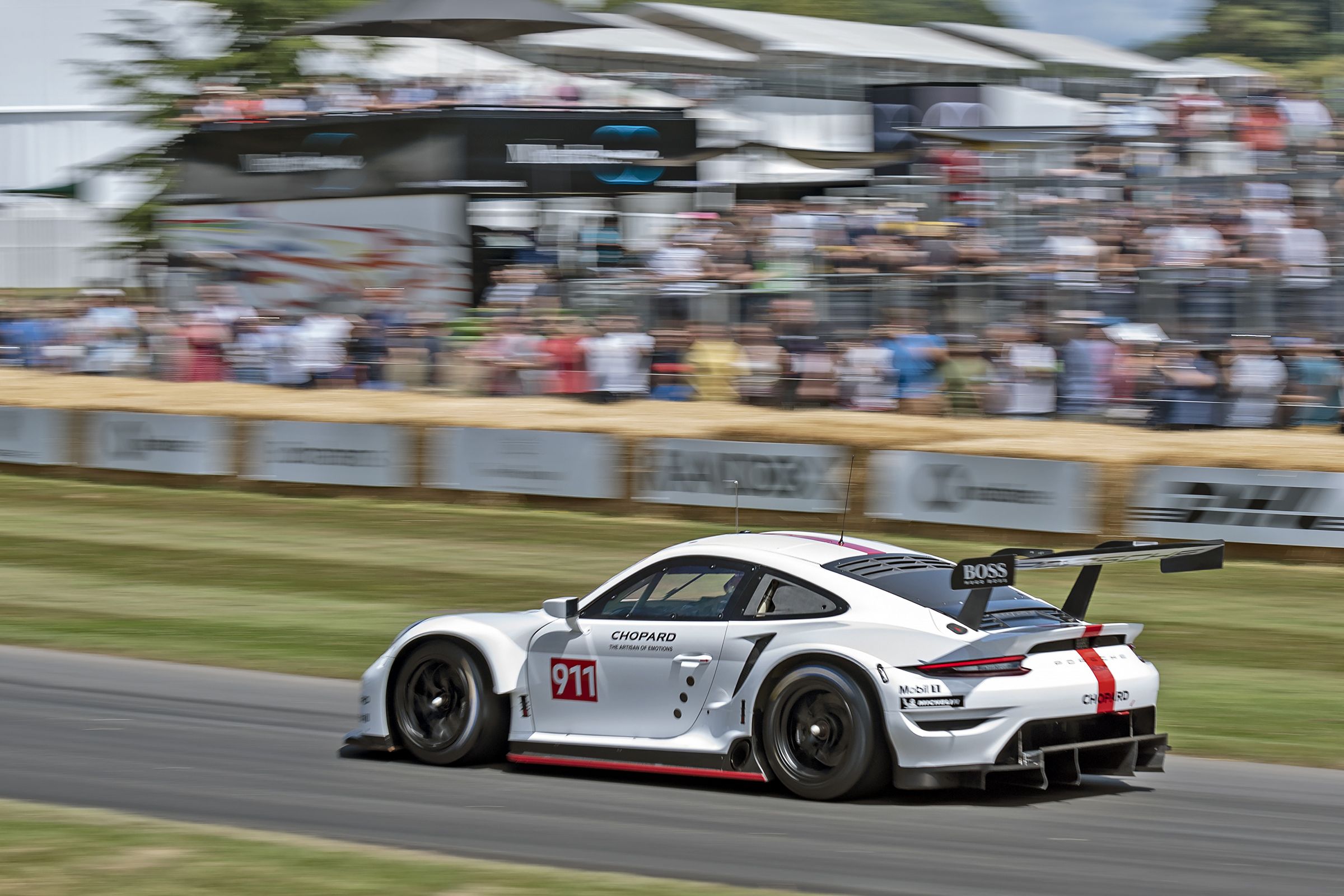 That side-exit exhaust sounds great and saves weight, but also aides the RSR’s aerodynamics. With no exhaust routed to the car’s rear end, a larger, more efficient diffuser is able to smooth out airflow exiting below the car. Porsche claims this change, along with the other aero tweaks (re-profiled body panels and wide wheel arches, among others), will increase the 911’s aerodynamic efficiency and stability significantly.

Porsche torture tested the updated RSR earlier this year, during a 30-hour endurance race simulation at Circuit Paul Ricard in France. According to Porsche’s director of GT Motorsport, Pascal Zurlinden, the RSR passed with flying colors. In addition to raw speed, the team aimed to improve non-performance factors within the car; if the team could make components more durable, simplify the car’s serviceability for mechanics, and ease driver fatigue with a simplified cockpit, the RSR would be even more competitive. Zurlinden says they improved all three. 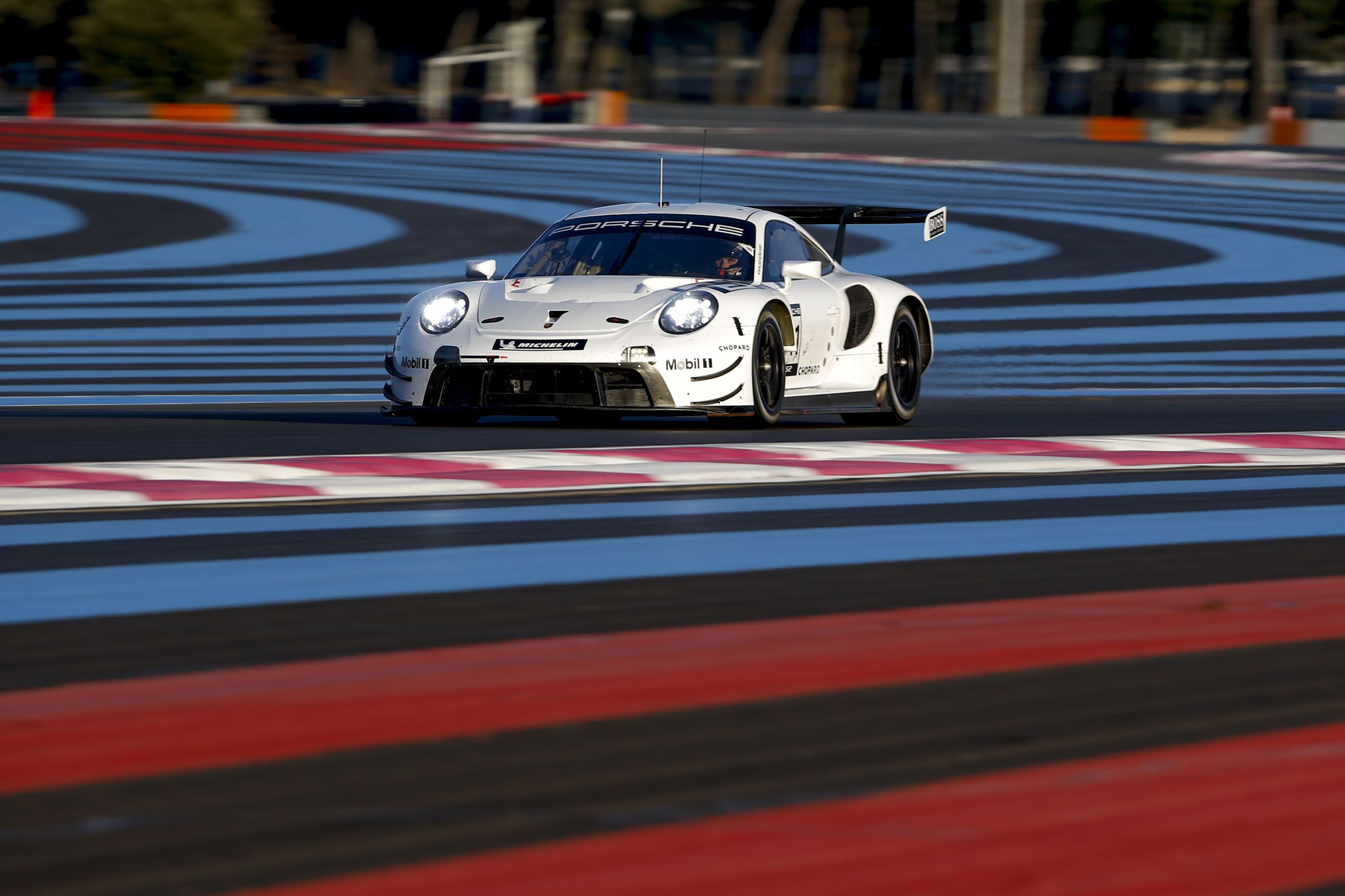 In racing, every detail is important, of course. But as Balance of Performance regulations are compensating for and restricting deltas in raw pace, it’s often those non-performance factors that dictate the podium at Le Mans, Zurlinden says.

The torture test covered more than 3,700 miles (longer than a trip from NYC to Los Angeles) without any technical hiccups, Zurlinden claims. “We made sure our drivers were bumping off every curb, really testing the cars for reliability,” he said. That statement will be validated shortly. The RSR begins its on-track campaign on September 1st, at the opening round of the FIA World Endurance Championship at England’s Silverstone Circuit. The GT works team will field two cars for the WEC season. The first in Porsche’s classic white livery, and the other in grey.

The RSR will launch its stateside assault in January, 2020, with the Porsche factory program’s two-car debut at the 24 Hours of Daytona in IMSA’s GTLM class. The Florida race will be a brutal crucible for the new RSR – the ragged track and competition conspiring against it. But with the inertia from Porsche’s dominant 2018/2019 endurance racing campaign, and the claimed improvements to the RSR’s performance, durability, and pace, we expect the new car to hit the ground running. Fast.