Home » Racing » Why a Racing Team, of All Things, Is at the COP26 Climate Summit Why a Racing Team, of All Things, Is at the COP26 Climate Summit

Motorsport has two types of teams, the first being factory-backed marketing initiatives with all the technology and funding that are also, as several Formula E outfits have recently discovered, entirely at the whim of their automotive overlords. Then there’s the other sort, which is generally thought of as the more vulnerable: privateer teams, the scrappy upstarts who have to source a powertrain and funding and are working with less to try to compete.

Envision Racing falls in that second category. It’s been in Formula E since the very first race and has undergone a few different guises, from becoming DS’s factory team for a few seasons to switching to Audi power in the Gen2 era. It’s always been competitive; last season was the first in which it didn’t win a race, although Envision took plenty of podiums and equaled Audi’s factory effort on points. And since late 2017, when it launched the Race Against Climate Change initiative, Envision has gone hard on the details of what Formula E is supposed to be about. 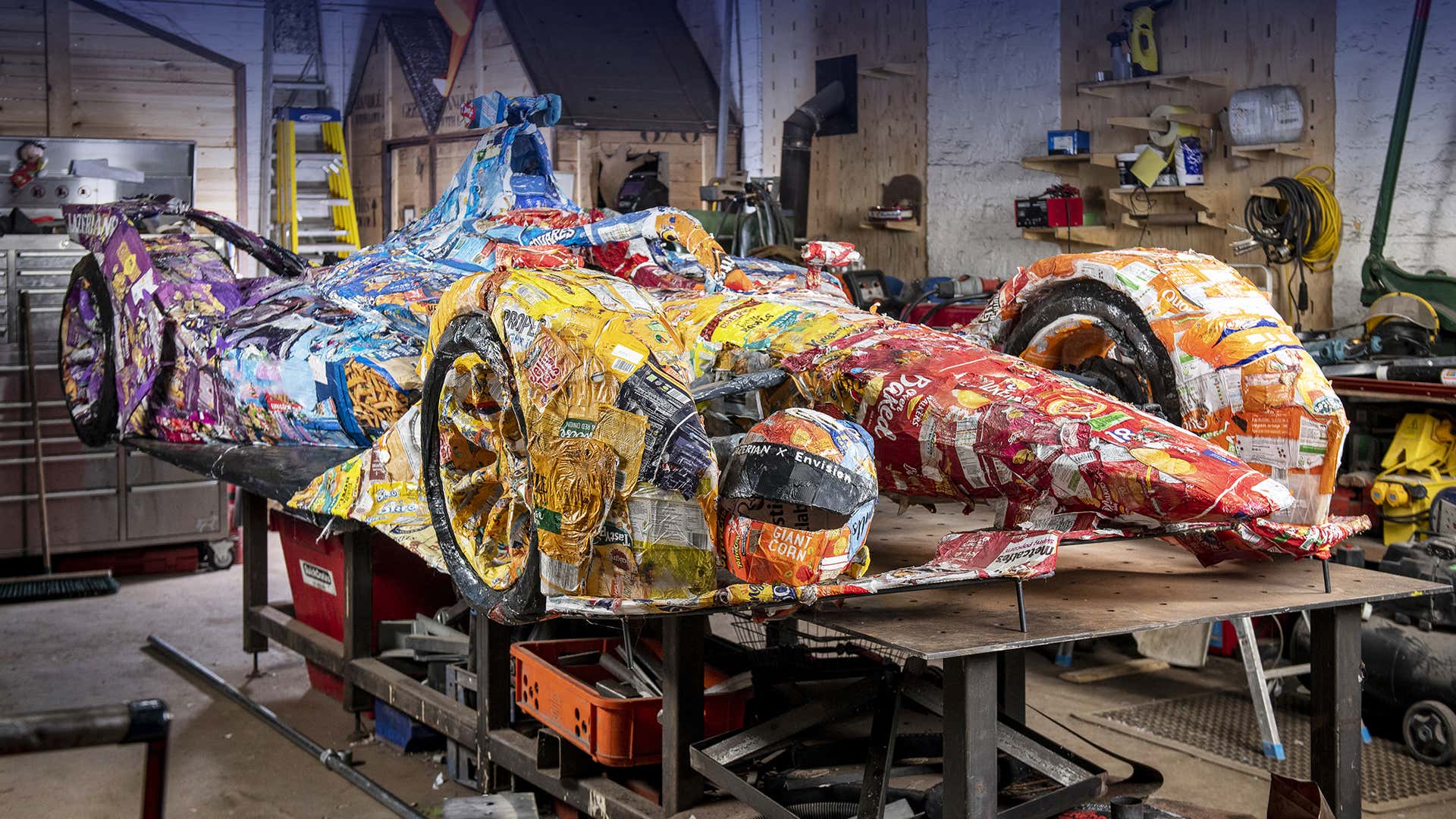 RecoverE – an FE car made of plastic garbage collected by kids

If you want to hear about racing without mention of climate change, tune out now—basically, everything to do with motorsport is related to environmental impact. This conversation isn’t going away, nor can it. Racing cars, as an indulgence, comes under greater scrutiny than other sports for the way it uses automotive technology, even if that accounts for very few of the emissions at an event. Beyond that, the way we frame race cars is what makes cars cool and for a lot of people, that’s now incompatible with a screaming 6.0-liter V12 outside of showcasing the history that era of cars now belongs to.

With all the noise Formula One’s been making about going green lately, it might be surprising that the only motosport presence at COP26—a global climate change conference with the world’s leaders and experts—isn’t the F1 circus rocking up. It’s not even an automaker. It’s Envision Racing, the small Formula E team from Silverstone, rocking up to show off three new cars—its Season 8 Formula E challenger (which, as per the rules, is Season 7’s car repainted), an electric two-seater racer, and a car literally made of garbage.

It’s an interesting stunt. After all, why bother? Envision Racing doesn’t really have a dog in the global geopolitical wrangling about what level emissions from cars have to be cut to or when internal combustion will be banned from sales.

I went up to Glasgow (on my own initiative, although the team did tip me off they were doing this) to check out the new car and catch up with Sylvain Filippi, Envision Racing’s managing director and chief technology officer, about why a little team is doing what other’s aren’t.

“It’s really important for us to be here, of course, because it’s a symbol of what we are trying to achieve as a team—it’s nothing new. And the purpose of our team is to help accelerate the adoption of cars, powered by renewable energy, which makes sense with Envision’s ownership of the team,” Filippi told me. He’s not wrong there—Envision is a Chinese green technology giant making everything from wind turbines to grid storage batteries and so while it might not be here to sell cars, it does have a stake in what charges them.

That’s where it’s different from an OEM team. Every carmaker is pursuing its own agenda, right now, about how to push forward electrification—and why its solution is superior to others’. In that sense, Envision Racing is a weird neutral.

“Formula E, of course, we’re talking about electric cars and the technology in cars and how efficient they are now and in the future,” Filippi agreed. “But our job is also, in my view, to think about the bigger picture and say: an electric car, even if it’s powered by the grid today, is already a lot more efficient and needs less carbon than internal combustion.

“But the dream—it’s got to happen soon. The aim, let’s say, is to have all countries powered by renewable energy anyway,” Filippi continued. “Then, of course, some of that energy will be used to power mobility. So we are in the perfect position because of our ownership, our DNA as a team, to talk about the car, but also the ecosystem around. And so it’s taking broader view. And yeah, you need all of it—Formula E is very successful because you have some amazing car manufacturers developing amazing tech and you also need teams like us, to talk about the bigger picture and the ecosystem.”

The team’s been working with COP for over a year regarding their Together For Our Planet joint campaign, and the conference organizers actively wanted Envision there. That might be kind of misplaced, gien that the priority should surely be getting the world’s delegates in, but there’s something about a cool, green race car that hits differently than another dry talk. “We are basically trying to help increase the profile of COP26, if that was needed, but from a different angle,” explained Filippi.

Some of what the team does might make less sense on paper. It partnered with Kids Against Plastic in 2020 to fight plastic waste—it’s a race that’s genuinely vital for the future of our planet but that isn’t quite so obviously beneficial to racing. Thing is, kids know about plastic and climate change. They don’t necessarily know so much about race cars or, well, cars in general. Depending on who you ask, they’re not as cool as they used to be, much like the planet.

“Formula One is so successful, as we know, because of the history and legacy, the stories in the past and in the ’80s and ’90s, and if you’re a young kid now, you haven’t been exposed to any of that. It doesn’t really mean anything to you,” Filippi explained. “So for sure, we see that to the younger generation, the more they are in tune with climate change because they will be the first affected, right? And they really understand it.”

Fitting racing into a green agenda is pretty easy, politically, from a carmaker’s perspective. But for less cynical minds there’s the opportunity to put it forward as part of the future while still making sure we have one. And it’s paying off for Envision, Filippi told me: “There’s a full segment of the younger generation that’s following Formula E and our team because all the things we are doing for climate change, it is not the other way around.”