So it’s here at last: the long awaited mid-engine Chevy Corvette. It wasn’t easy. The time-honored phrase “a day late and a dollar short” has almost always applied to the Chevrolet Corvette. Delays throughout its history have been measured in years, not days, and the funding shortfalls in tens of millions of dollars, but the result is the same. The C1 Corvette platform lasted through 10 years and three facelifts instead of the planned four-year run. The “split-window” C2 came a decade after the Corvette bowed but was itself a full five years late. I was working hard in 1955 on a C2 planned for 1958, but its advanced rear-transaxle chassis finally achieved production only with the 1997 C5. That layout did reach production in 1977—outside General Motors—with the Porsche 928, created in part by Anatole Lapine, who’d worked with me on the stillborn ’50s C2. I know little about behind-the-scenes projects that might have occurred during the 40 years between my departure from GM in 1957 and the arrival of the C5 but I suspect that there were a lot of exciting and highly feasible—but not fundable—projects. I do know that Zora Arkus-Duntov advocated for mid-engine Corvettes at least 60 years ago, and that he built a mid-engine CERV research single-seater in the Fifties with its small block V-8 behind the driver. So this car has come to market extremely late.

Some 1970s mid-engine GM concept cars were built to show off the Wankel rotary engines GM might have built, but they were not specifically Corvette prototypes in name. Which is too bad, because they were better-looking than this actual C8. I am deeply sorry to be severely disappointed by the styling of the C8. I hoped for something really new and exciting, not a boringly generic supercar, mostly indistinguishable from the many and varied unimaginative devices that show up regularly at the Geneva auto show. Its styling is confused—and downright messy in fact. I count a dozen horizontal lines, not to mention four convoluted taillights; four nice rectangular exhaust tips; plus varied slots, vents, grilles, indented surfaces, and wing elements . . . just across the rear fascia. The front is no better, and the profile with its short, stumpy nose is equally surprising. Maybe it’s all meant to look purposeful, but to me it seems just a careless, cluttered graphic composition, not worthy of Corvette history and what we expect of this technically brilliant descendant of the Jaguar-inspired elegant original C1 from 1953.

I have no doubt that this will be a very good car, with truly world class performance coupled with American-style daily usefulness and (perhaps) easy servicing—dry-sump engines are not typical dealer shop fare. But I’d have liked to see some traces of the Astrovette or the four-rotor mid-engine concept from the Bill Mitchell era. 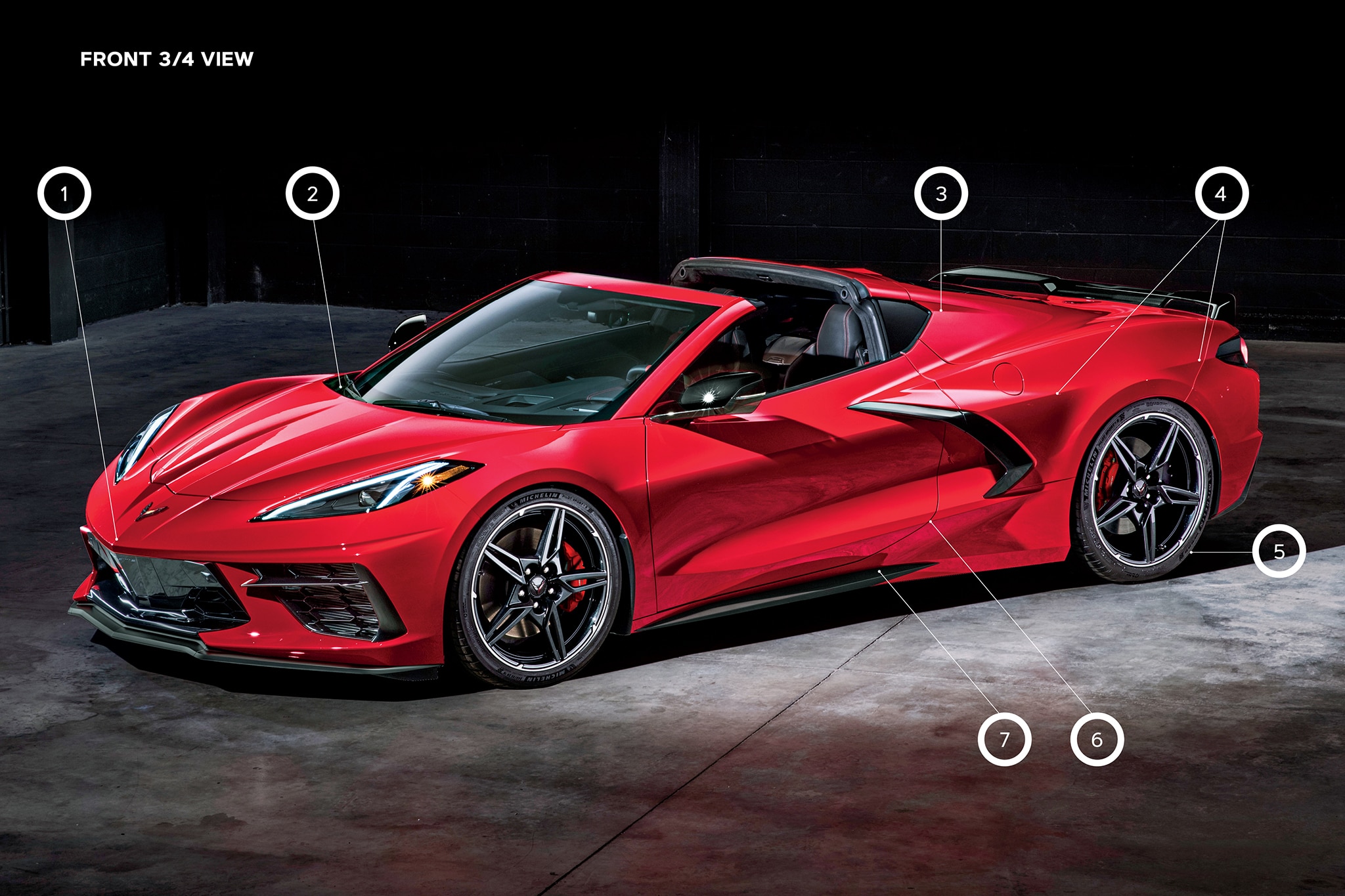 1. The nice surface break line in the center of the nose is a good Corvette characteristic, but the multiple lines across the hood are fussy, messy, and essentially excessive.
2. The big gap between painted hood and the windshield keeps the wiper mechanism out of the airstream and out of sight.
3. I find this little undercut incomprehensible. There are entirely too many busy surface changes on the basic form.
4. These hard lines derive from the tip of the taillight and the bend in the side scoop, and both fade to nothing above the wheel opening, itself outlined with a hard crease.
5. The wheels are magnificent. Simple, spare, open and very strong. Great design.
6. Let your eye follow the rear door cut up the side of the car to see how many planes it traverses.
7. This black goiter on the side of the body has become a sort of trademark for Renault city and economy cars. What’s it doing on a Corvette? Just an excuse for something black? 1. The stuff under the tail is complex, and one would like to credit aerodynamic studies for it, but it needs explanation. It’s just as well to have made it invisible with black paint.
2. Black paint being applied to the add-on wing actually somewhat cleans up the visual aspect of the rear fascia.
3. The rear fender profile, rising out of the rear of the door, is a beautiful curve . . .
4. . . . as is the centerline profile of the upper structure, and the two are harmonious. Good work.
5. Are these nominal quarter windows transparencies or just black paint, Pontiac Fiero–style?
6. Putting a massive three-part black blade around the side air inlets does clearly announce that something’s going on behind the cabin. Given all the surface changes, it seems blatantly excessive.
7. It may be a bit short, but the front fender profile curve is quite nice and seems to fade nicely into the door skin. Which is itself an unnecessarily complicated surface.
8. Another grouping of non-quite parallel, not-quite horizontal hard lines. Busy, busy… 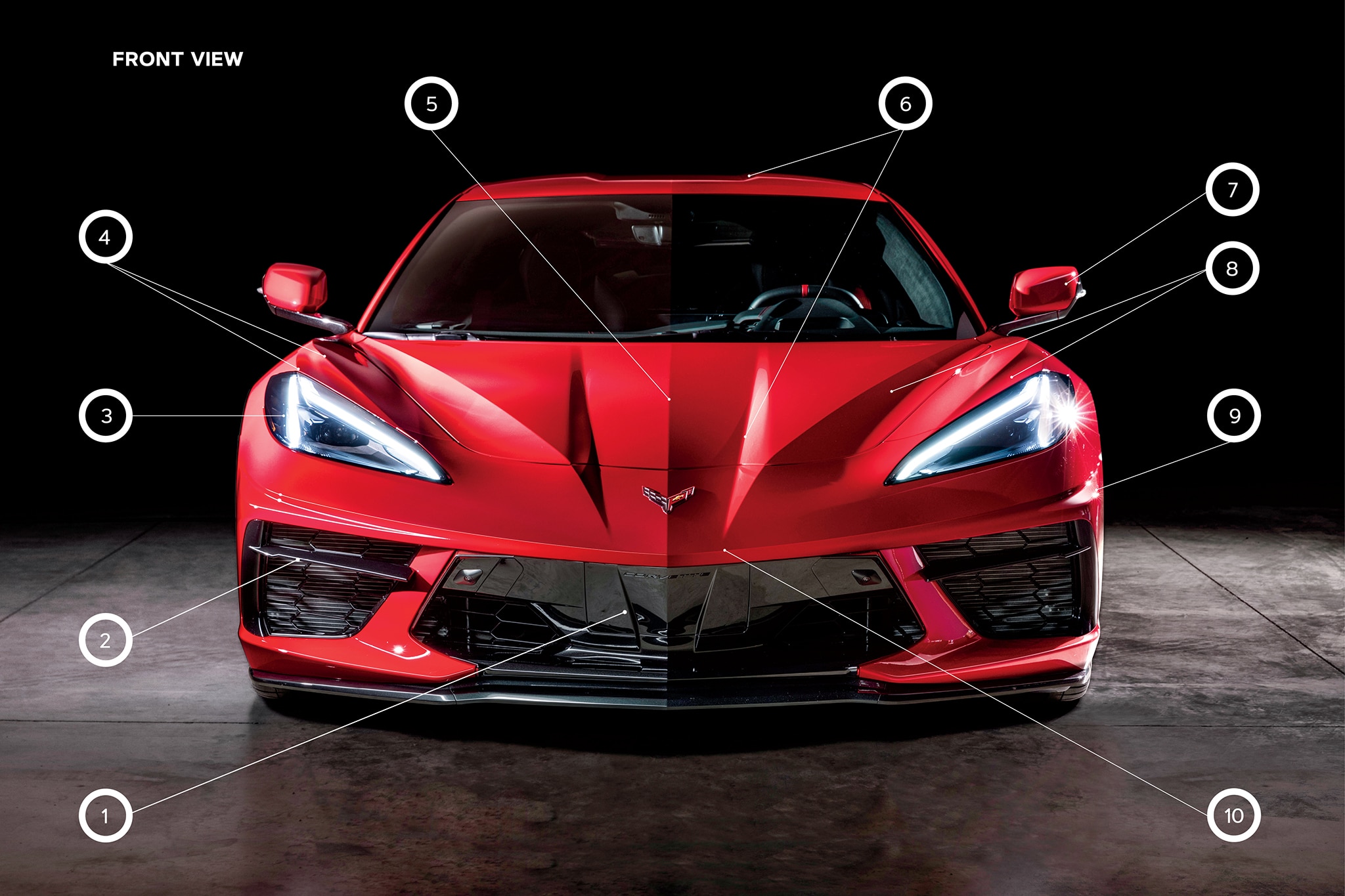 1. The trapezoidal grille opening is partially filled with blocking plates, the center portion of which continues the vee-shaped central hood form.
2. The only immediately apparent grille detail is the black bar that crosses the outer air intakes, well forward of the textured grille work farther back in those intakes.
3. The almost-triangular headlamps, sharply pointed toward the center, are quite pleasant. There appears to be an air inlet outboard of the transparency over the running lights.
4. Two sharp kinks in the surface derive from the inner and outer points of the headlamps.
5. This crisp centerline recalls the “pressed trouser” look Bill Mitchell loved and instigated on the C2, even to the detriment of rear visibility. Here it ends at the windshield base.
6. Deep creases in both hood and roof break the transverse flow of surfaces with sharp negative indents.
7. Body-colored side mirrors sit on polished arms extending outward of the mirror housings themselves.
8. Here we see the inversely curved surfaces resulting from imposed surface breaks, one on the hood, one between fender peak and the headlamp.
9. Yet another negative surface runs around the front corner and then disappears before the front wheel opening.
10. The flat band above the shrouded ‘black hole’ of the main frontal air intake bifurcates into two parts at about the headlamp’s innermost point, just above the painted strut in the grille. 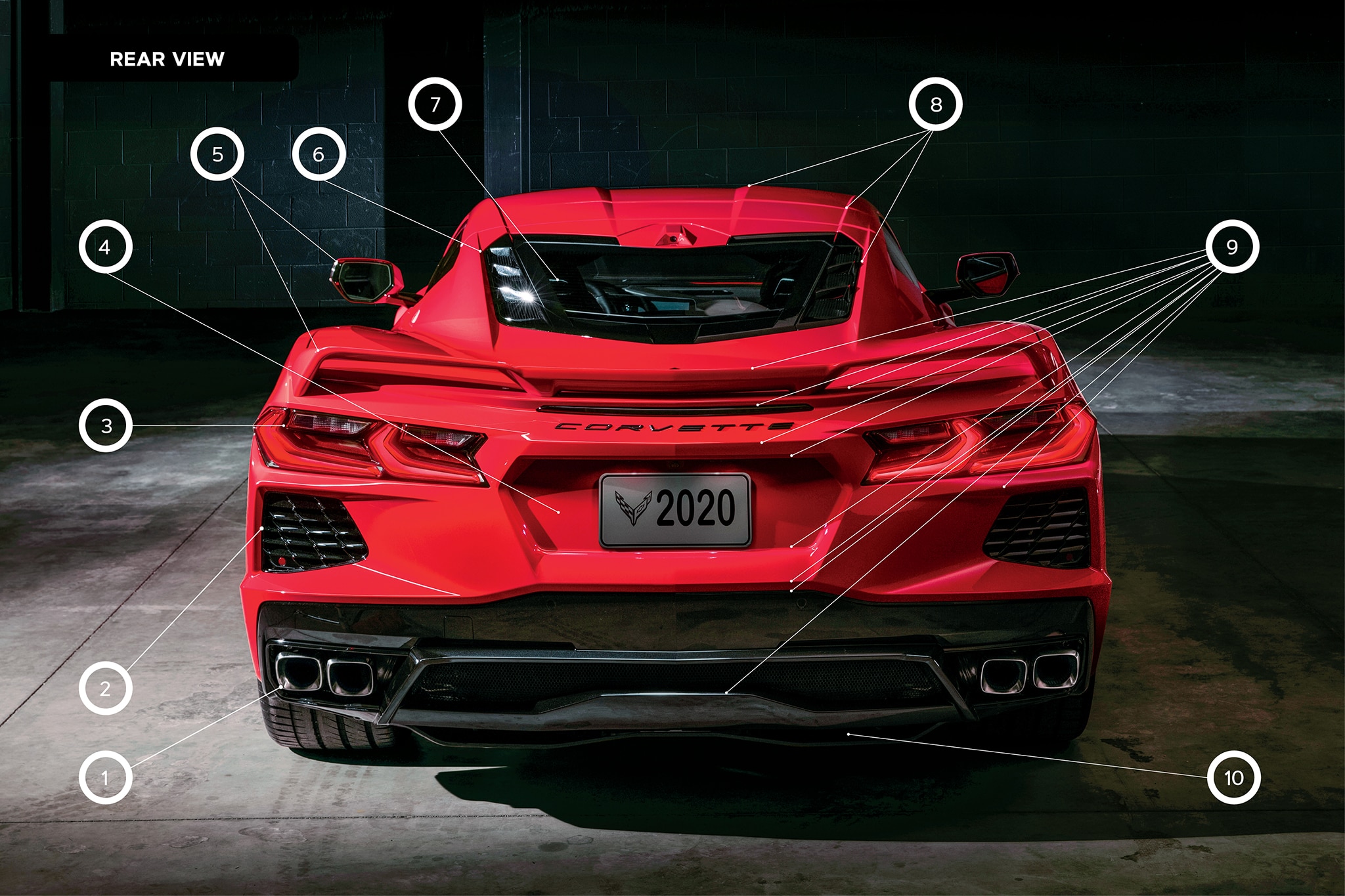 1. Four neat exhaust outlets are tucked into two of the six black outlet areas beneath the painted bodywork.
2. Presumably these outer corner grilles are to release hot air from the engine compartment, always a problem with mid-engine layouts.
3. The taillights recapitulate the four-lamp theme of the last several generations, but they are more sedanlike than one would like to see on a sports car.
4. License-plate mounting area is outlined twice and is sized to accommodate the whole worldwide range of plate sizes.
5. In this image, both the rear wing and mirror housings are body color, indicating buyers will have a choice.
6. These slots that flank the backlight presumably evacuate hot air.
7. The backlight itself is minuscule.
8. There are three inward-facing bands created by surface changes on each side of the roof and upper structure. Two would have been plenty. None might have been better.
9. There is a surplus of horizontal lines across the tail. I count at least 10, but there may be even more in the indecipherable black areas down low.
10. Two more little scoop-like outlets at the very bottom of the tail. Functional or decorative? 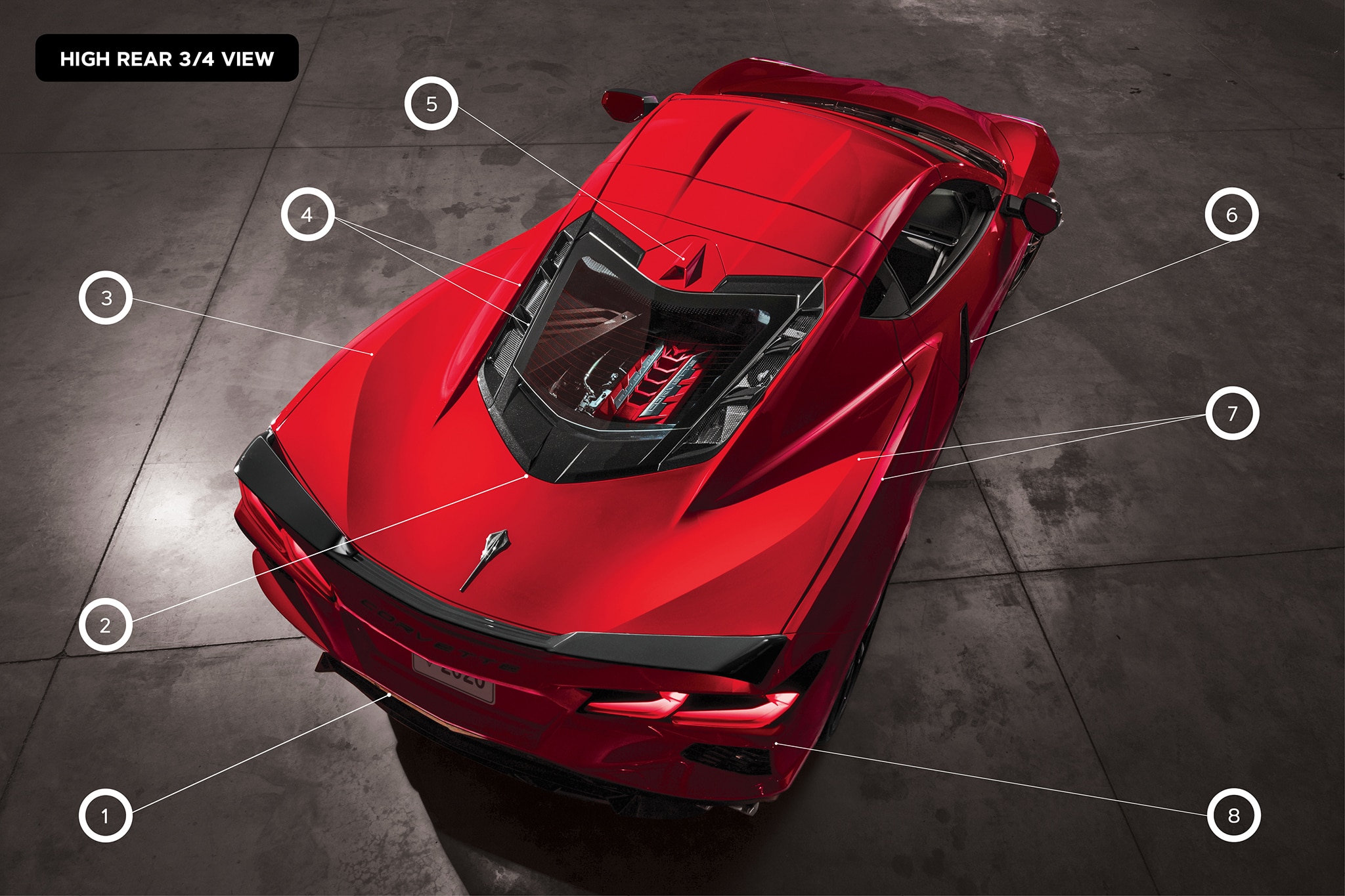 1. There is a slight flattening of the plan view curve, emphasized by the straight-line leading edge of the outer wing above the taillights.
2. This pointed shape is rather nice but doesn’t seem to have anything to do with anything else on the exterior.
3. The fender peak line is quite flat from the door rearward, with the inner line curving away inward to fade away at about the point where the wing’s leading edge is notched.
4. More hard lines, the outer deriving from the A-pillar continuation, the inner one from one of the multiple lines incised in the roof, surrounding more grilles.
5. This three-flat-sided construct on the roof and the indented, forward-pointing section on which it sits are hard to comprehend. It all seems like a lot of nice detailing to no clear purpose.
6. It’s apparent that the side scoops stand quite proud of the nominal main door skin, and that the C8 is very wide-hipped, rather like a dually pickup with its fat fenders.
7. In profile, these two lines are essentially identical, so the flat area they define gets a lot wider toward the back.
8. There is a sort of knob here where the taillight cluster is forward of the surfaces framing the outer corner grilles.

Read More
Colors and Trim: All the Ways to Order Your C8
C8 Full Specs: Chassis, Output, and More
2020 Corvette Debut: Everything You Need to Know 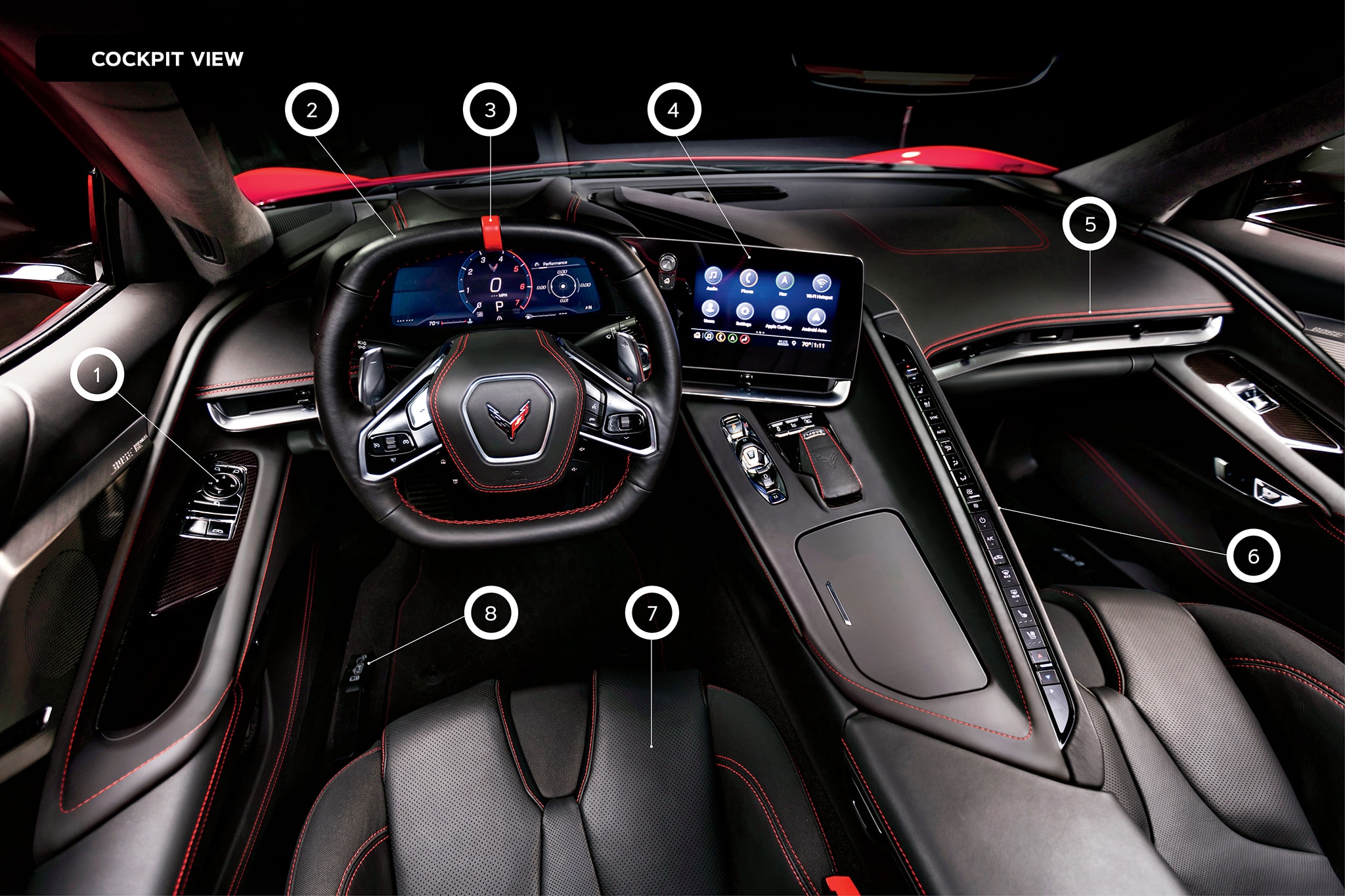 1. Mirror controls on the door are practical and convenient.
2. A ‘square’ steering wheel seems a bit odd, but perhaps it is to evoke current F1 practice.
3. Certainly the straight-ahead band on the rim is derived from racing practice.
4. The icons on the touchscreen are big, well-separated, and clear.
5. Colored stitching on the panel, doors, and seats is agreeable, subtle, and even distinguished. But the whole cockpit is more luxury coupe or sedan than sports car.
6. As commendable as the touchscreen is, this long slot of unergonomic tiny switches is distressing. I suppose after a long period each user will remember the what and where of 20 to 21 touches, but it’s asking a lot for people who drive more than one car regularly.
7. Apparent provision for a fifth seat belt strap at the front center of the seats is a sporting touch, irrelevant with the standard three-point belts. But it looks good.
8. Are these labelled controls? They’re awkwardly placed for reading or activating.