Home » Tuning & Technology » It's Been 10 Years Since Modern EVs Arrived: Where We Started, Where We Are and What's Next It's Been 10 Years Since Modern EVs Arrived: Where We Started, Where We Are and What's Next

The Volt had an EPA-rated electric range of 35 miles, and the Leaf’s all-electric range was only a bit more than twice that: 73 miles. But the Volt was marketed as a “range-extended electric car,” just as hard to understand back then as the idea of a plug-in hybrid—and the Leaf was distinctly odd-looking. Still, no matter how compromised, they represented the cutting edge of automotive technology at the time. 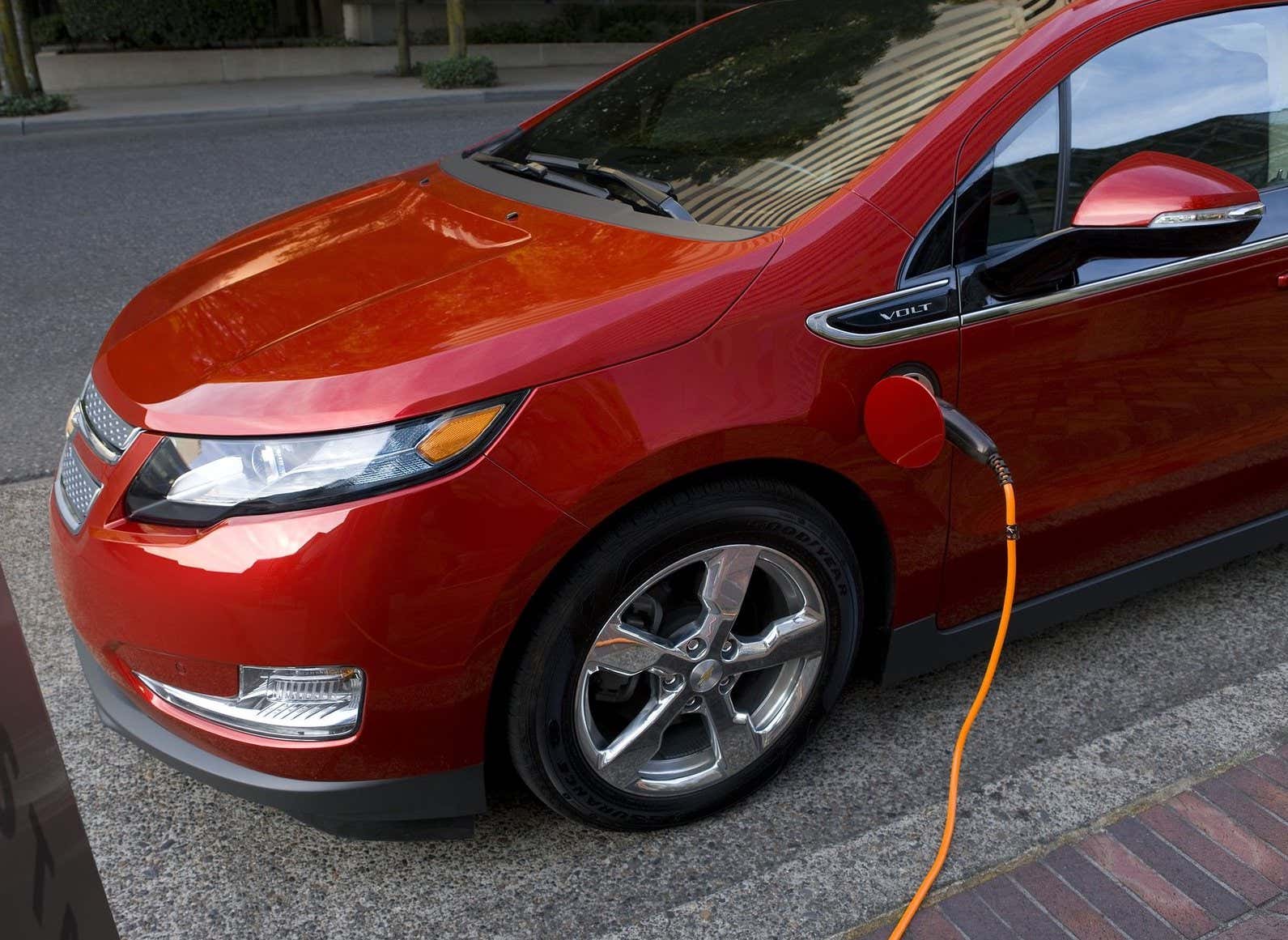 Back then, the Tesla Model S had been announced in April 2009, but wouldn’t struggle into production until 18 months after the Leaf and Volt launched—two years after Tesla’s original launch date. The auto industry viewed it as a desperate long-shot idea by an arrogant Silicon Valley startup that had sold a few novelty $100,000 electric roadsters to rich tech bros, a niche player at best.

What a difference a decade makes.

This month, there’s an electric Ford Mustang landing at dealers. An electric Hummer is coming next year, which should permanently reset the image of EVs from polar bears to badass, intimidating, military-inspired off-road monsters. Ford and General Motors will offer additional EV pickup trucks within a couple of years.

Tesla has become profitable for successive quarters, it now builds cars in the U.S. and China and it will open two more plants—one in Austin, Texas, the other in Berlin—next year. Today it debuted on the S&P 500 index after a more than 700 percent increase in price this year alone. It is valued higher than the world’s eight largest car companies, put together. It doesn’t sell as many cars globally as, say, Subaru, but it’ll build roughly half a million EVs this year. (And just for good measure, Tesla may launch a semi-tractor for freight hauling as well.)

Not bad for a company in only its ninth year of mass production.

From Climate Concerns to Badass Pickups

It’s all because the world’s regulators and even politicians accept the science of climate change, and understand that electric vehicles massively reduce the carbon-dioxide (CO2) emissions from wheeled vehicles in every sector—especially in China, the world’s biggest car market and arguably the biggest driver of this shift to EVs.

Plus, cost reductions and performance improvements in lithium-ion battery cells soared over the last decade, at a rate far speedier than predicted when the Leaf and Volt got the green light in 2008 or so.

It’s now clear the world will transition to electric vehicles over the next several decades. It’ll take a long time, given 1.2 billion vehicles on the planet’s roads today. But the progress over the last 10 years has been breathtaking.

Think back 10 years, to the very first zero-emission vehicle that launched in volume, the one that heralded hybrids’ demise as the most advanced-technology vehicles on the road. That would be the 2011 Nissan Leaf.

Consider how it compares to the specs of today’s electric cars—which require us to generalize, because there are so many across so many different categories—and to the charging infrastructure then available. 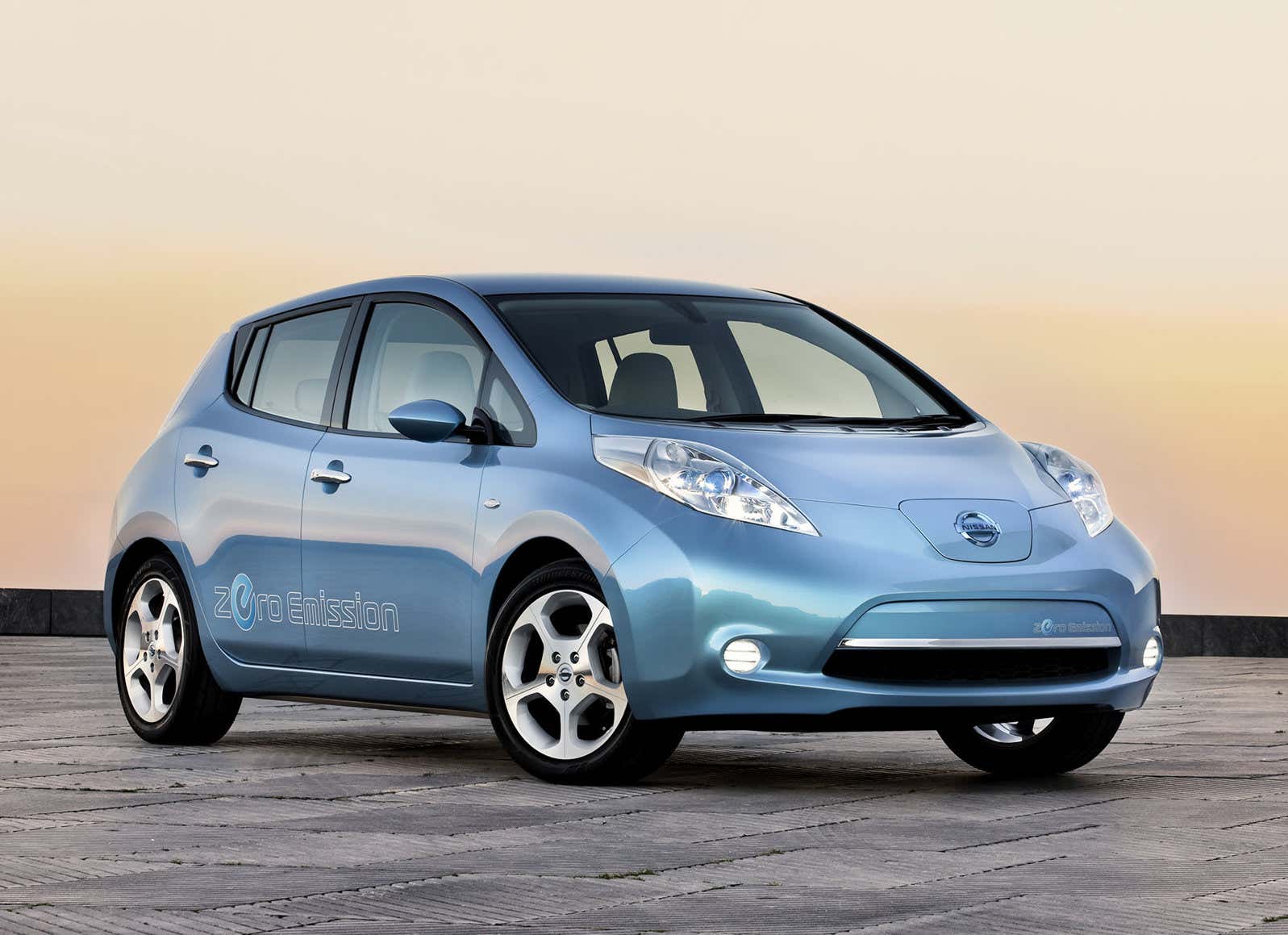 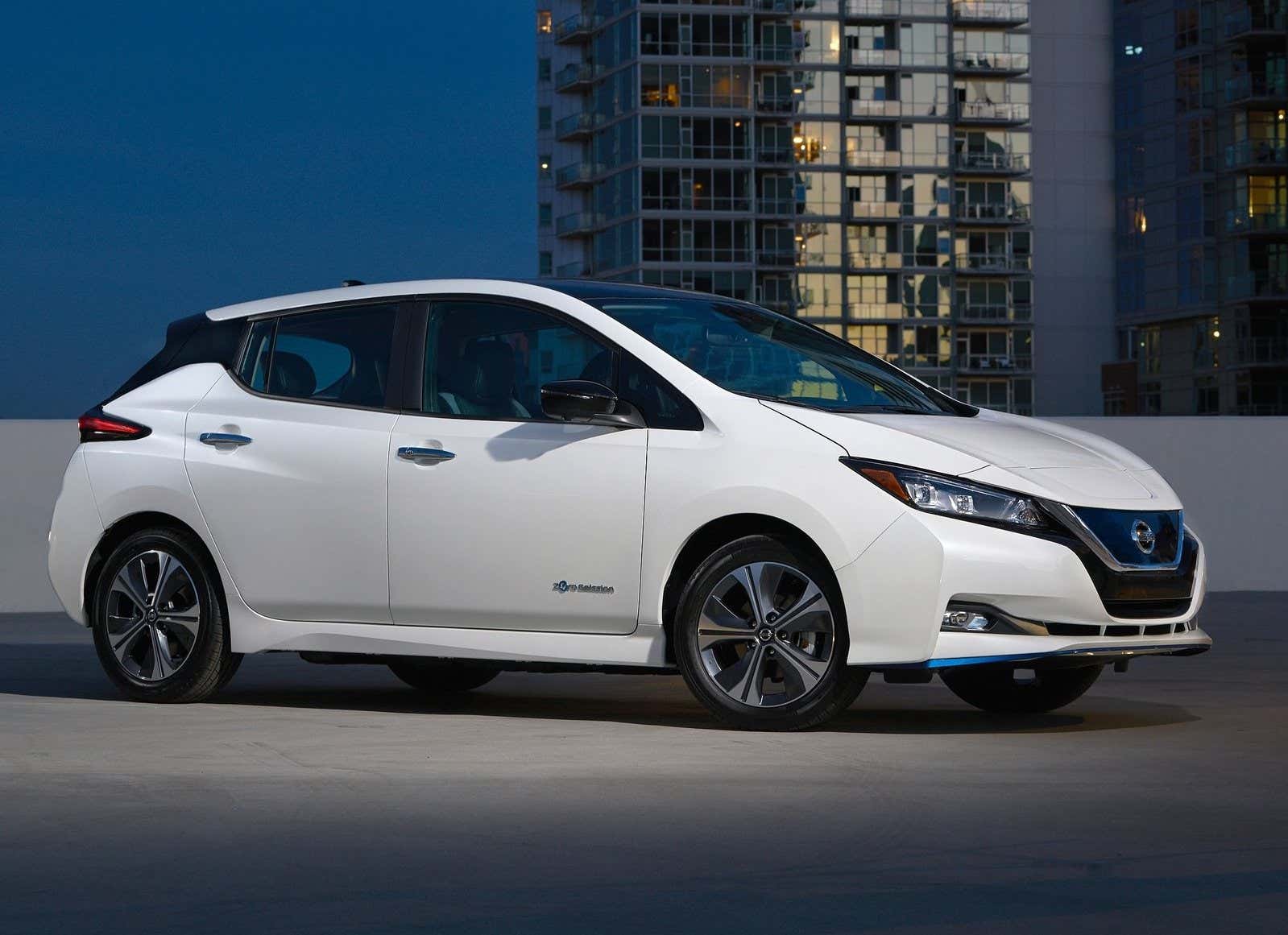 In the U.S., the minimum range for any electric car to be worthy of consideration for purchase by mainstream consumers is 200 miles. It really ought to be 250 miles to give shoppers confidence that even if they lose 30 percent of their range in bitter cold, they can still get their kid to the hospital in the middle of the night. GM says it thinks 300 miles is the “confidence point” where buyers won’t worry.

Tesla was right there, of course. All but one of the dozens of Model S variants have offered 200 miles or more of range from the outset. That one, the 2013 Model S with a 40-kWh pack, proved to be such a slow seller Tesla canceled it. Which pretty much proved 200 miles was the necessary minimum. (In Europe, that number is closer to 250 km, or 155 miles, given widespread and well-used high-speed trains between city pairs.) 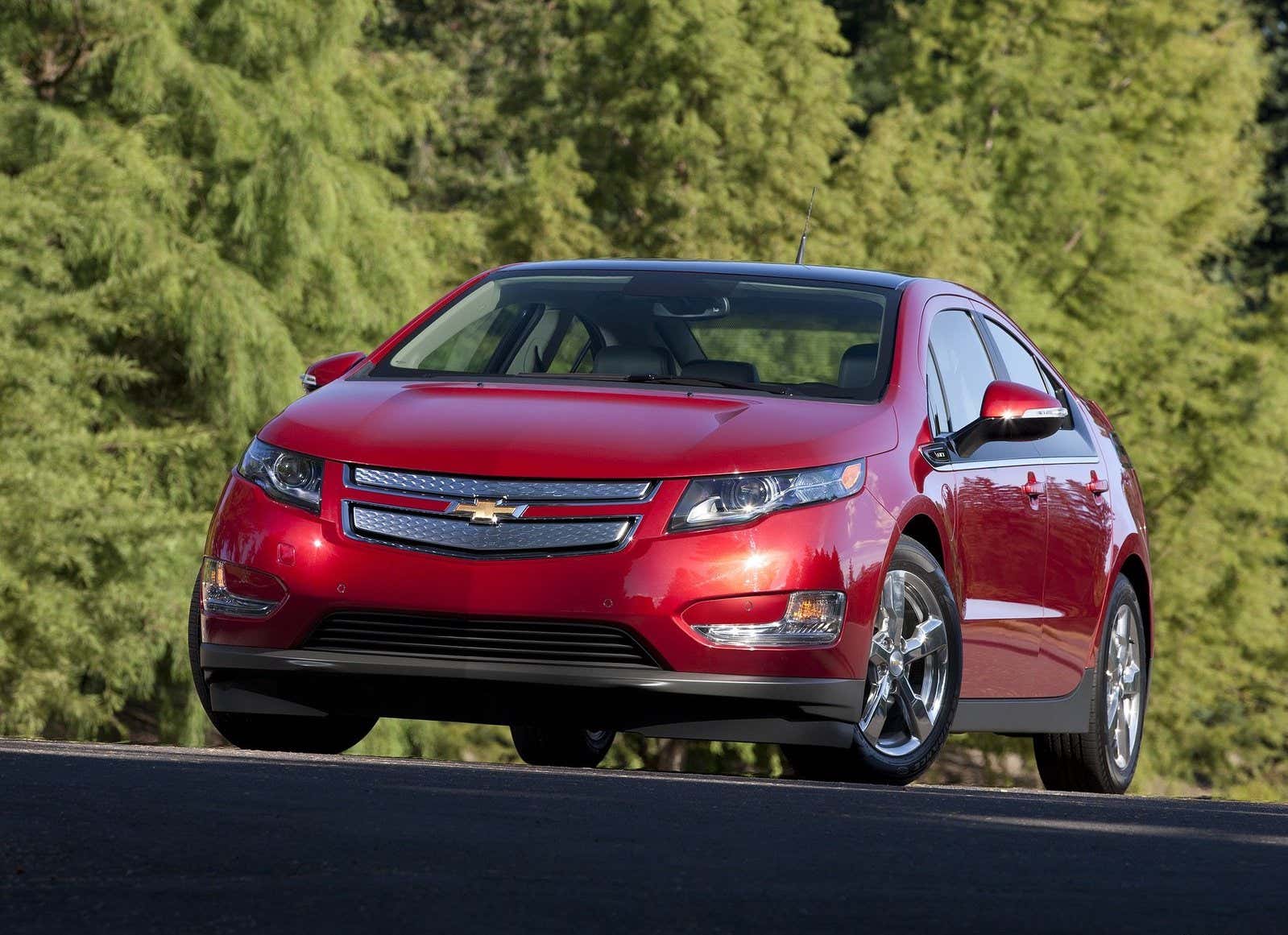 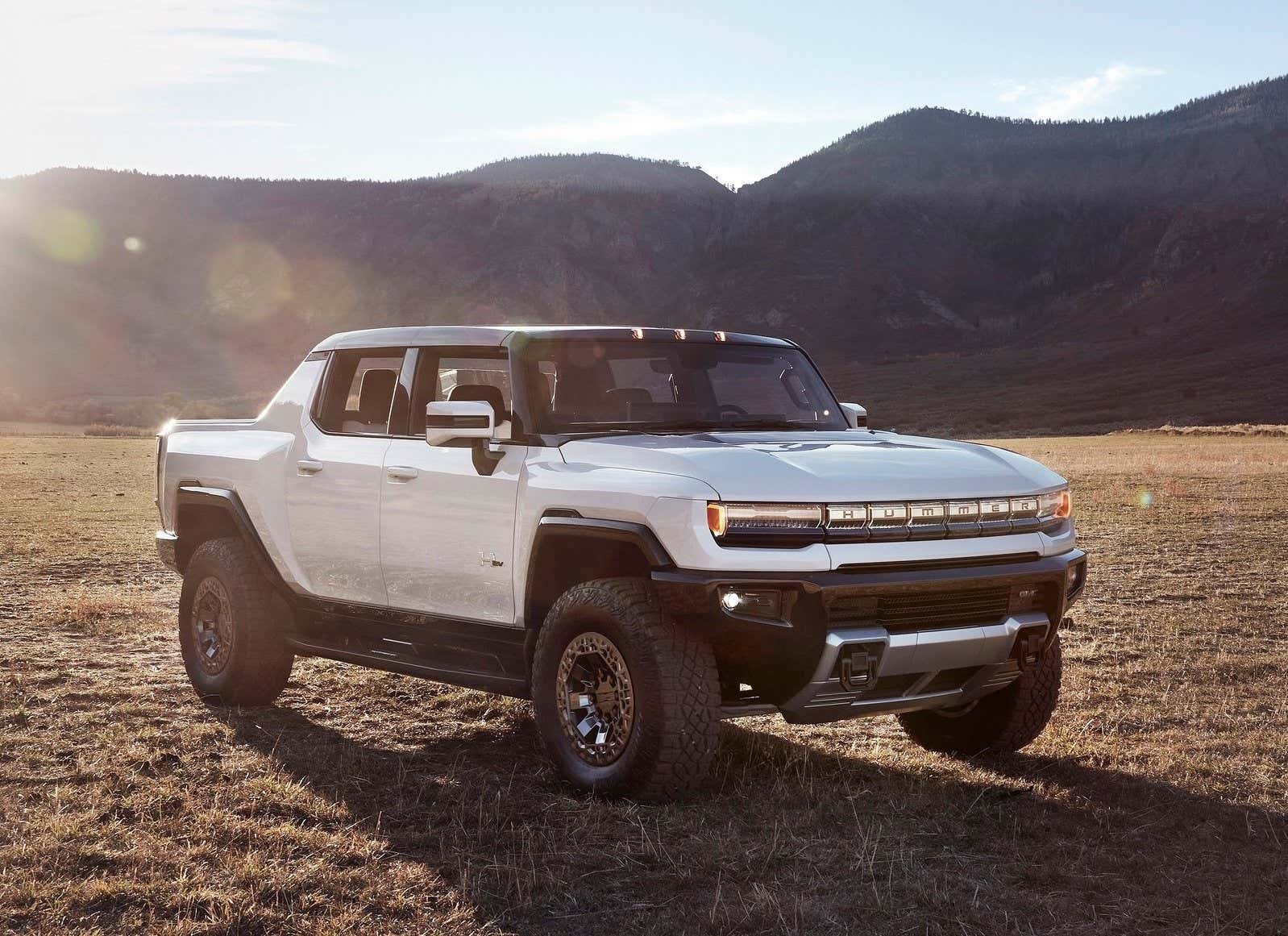 The U.S. has never really liked hatchbacks, though we’re quite happy to buy them if they’re jacked up and have all-wheel drive (Subaru Crosstrek, we’re lookin’ at you). So the earliest EVs were ignored by many people who could easily have used them, because they didn’t like the body style. (Let alone the rather outré design of the first-generation Leaf.)

Ten years later, U.S. buyers purchase far fewer passenger cars (sedans and hatchbacks) than they once did. And the single largest segments are compact crossover utility vehicles and full-size pickup trucks. In 2021, the Ford Mustang Mach-E, Nissan Ariya and Volkswagen ID.4 will join the Tesla Model Y. Battery-electric pickups will follow in 2022 from Ford, GMC, Rivian and others. 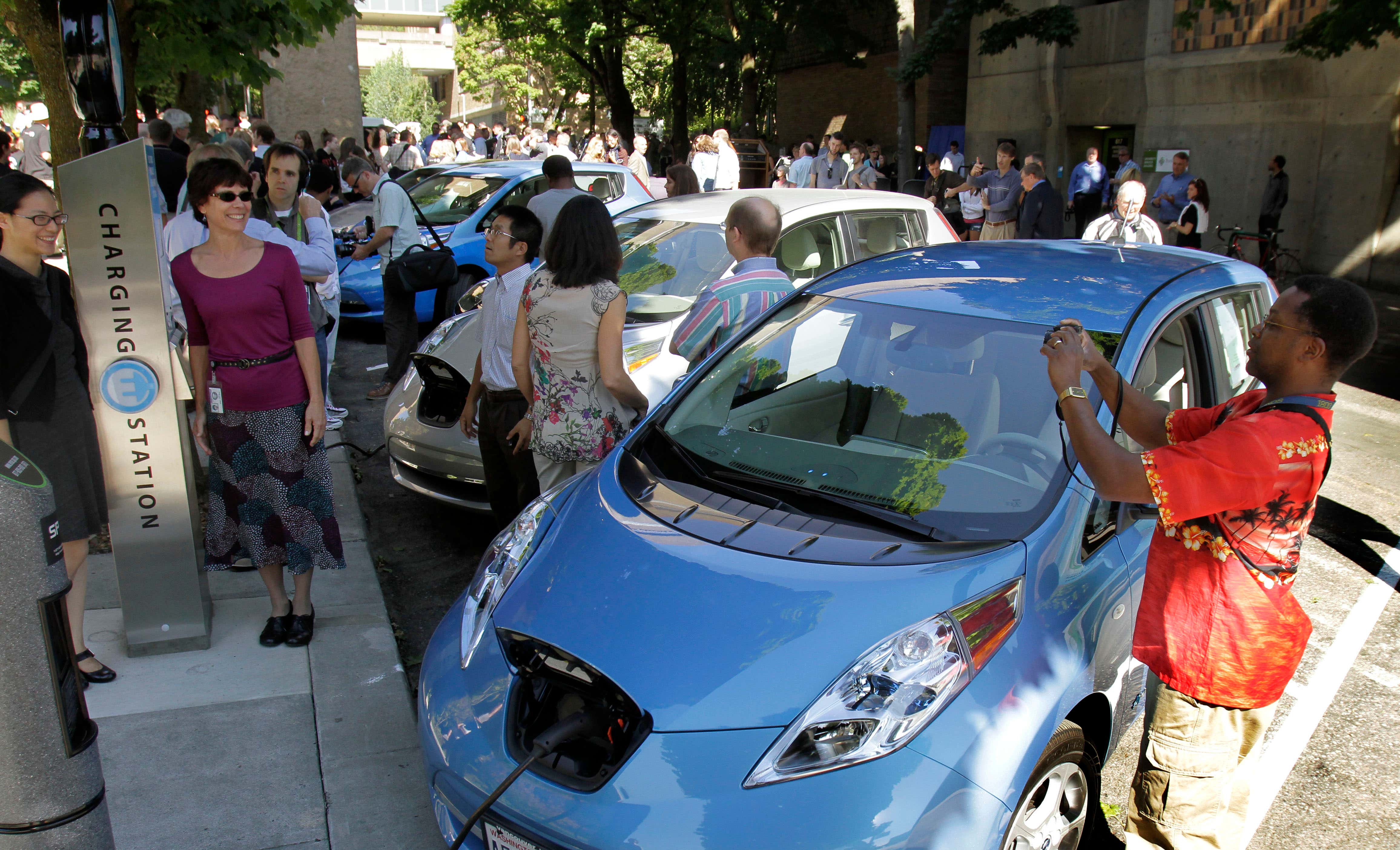 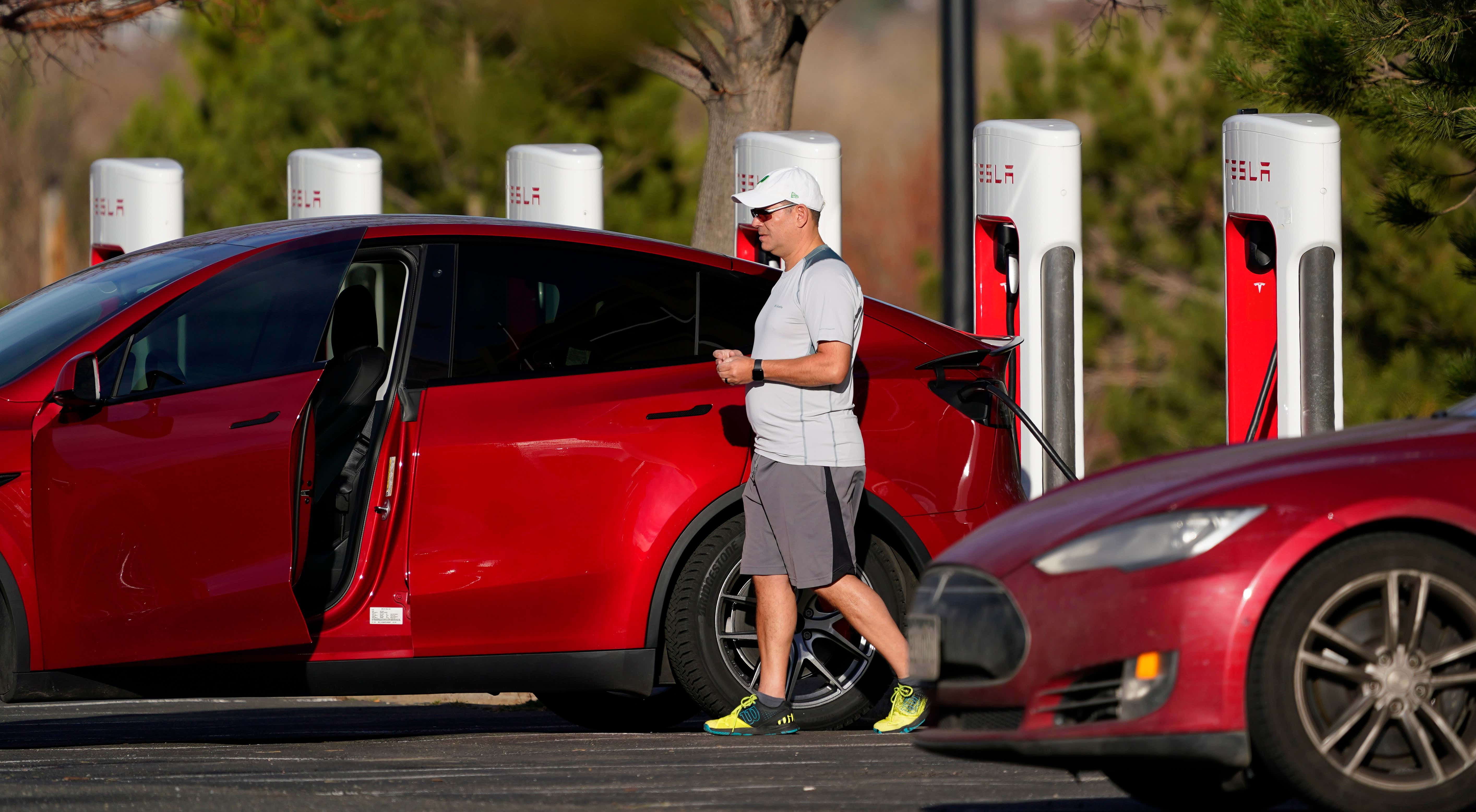 Today, 80 percent of the miles covered in electric cars happen thanks to overnight charging at home or during the workday. But one of the biggest hurdles to adoption is explaining this to shoppers, since there’s no analogy: there’s no way to fill your tank overnight with gasoline in your garage.

Worse, the public is largely unaware of the tens of thousands of charging sites that already exist, because they’re smaller than gas stations, they’re not consistently signposted and they’re operated by hundreds of disparate companies, organizations and municipal agencies. They’re easy to find using phone apps, but you don’t have to use an app to find a gas station, do you? Nor do you have to figure out whether the gasoline it sells will work in your car.

Tesla modeled for the world what a modern, high-speed charging network along highways should look like, starting in 2012. It’s now possible to drive a Tesla through more than 90 percent of the lower 48 states using its Supercharger network alone. But like Apple, Tesla charging sites only work for Tesla cars—which is a lot simpler.

The rest of the industry has to cope with a motley collection of multiple charging networks, locations and DC fast-charging speeds. For North America, the CCS fast-charging standard has emerged, with the old CHAdeMO connectors used by Nissans destined to sunset over time. While legacy 24-kw and 50-kw CCS sites still exist, to drivers’ frustration, the minimum modern-day charge rate is now 100 to 125 kw. Cars like the Porsche Taycan point the way to faster rates yet: 250 to 350 kw.

In 2011, it was a miracle to recharge a 74-mile Leaf to 80 percent in half an hour instead of overnight. But new EVs have batteries of up to four times the capacity—and the goal is to cut charging time from 30 mins to 20 mins for four times the range. The earliest Leaf drivers might have found that hard to imagine.

Finally, there’s seamlessness. Again, Tesla had the right idea back in 2012: Plug in the car and simply walk away. The car and network communicate, validate each other and any billing is handled on the back end by charging the driver’s credit card.

Until recently, drivers of other EVs had to carry a collection of phone apps, RFID fobs, or membership cards for any charging network they might encounter. About the best they could hope for was free charging hours on one or two of the networks for a few years from the automaker, if they were lucky.

Now, the international Plug And Charge standard provides Tesla-like capability, eight years later. The driver of an EV plugs into a DC fast-charging site where it’s enabled and, voila, the car and charging station validate the session, authorize a payment and charging starts. No fobs, no memberships and no calls to long-suffering customer-service folks on the toll-free number.

Quite accidentally, I seem to have been the first civilian in the U.S. to use the new Plug And Charge standard in the real world on the Mustang Mach-E I tested last weekend. It works just as advertised: I plugged in the CCS connector, waited the better part of a minute as the various bits and pieces talked to each other … and then the charging started, courtesy of the single FordPass app that will cover multiple networks.

Not Perfect, but Getting There

Five years after the Leaf launched, early 2016 saw the Tesla Model S hitting its stride, with the smaller, less-expensive Model 3 promised but not yet in production. That year, ranges for other EVs had risen to 125 miles—while Tesla aimed for the first 300-mile EV.

But the year before, in January 2015, GM dropped a bombshell. It announced it would offer an EV, priced at $37,500, with at least 200 miles of rated range. The 2017 Chevrolet Bolt EV, entered production in late 2016, offering 238 miles of range—and suddenly rendering every other small compact hatchback EV obsolete.

Now the Bolt EV itself feels obsolete after just four years. Its fast charging is limited to 50 kilowatts at best, it’s still a compact hatchback and GM has an entirely new generation of Ultium electric vehicles coming. Not just the future Cadillac Lyriq and GMC Hummer EV, but also two Chevy EVs: a full-size electric pickup and a compact crossover. They’ll be at dealers within three years. And those are just the ones GM has talked about.

Imagine what kinds of vehicles we’ll be looking at 10 years from now. The EVs of 2031 will be price-competitive, if not cheaper, than comparable gasoline vehicles. They’ll cost far less per mile to run, and a nationwide DC fast-charging infrastructure will let drivers travel almost anywhere they would take a gasoline car today. Their ranges will mostly start at 300 miles.

More importantly, a lot of drivers are going to discover the addictive nature of electric motors: maximum torque from 0 rpm lets you win a lot of stoplight Grand Prix races. They’ll find EVs are simply better cars than what they’ve experienced before. One-pedal driving is smoother, easier and calmer—just like EVs as a group—and plugging in at home or in a parking lot or garage will be second nature. A lot of drivers will discover they like never having to visit a cold, dirty gas station.

After a while, in fact, the question may become why we’re hanging onto cars that move by burning fossil fuels via thousands of violent explosions a minute, spewing gases that cause climate change and pollutants into our shared air. It almost makes you ask when the very idea of a car with a tailpipe might become considered morally wrong.

That question would have been laughable just 10 years ago. When the Leaf launched, Toyota confidently predicted hybrids would carry it from 2000 to 2040, when hydrogen fuel-cell vehicles would displace cars with combustion engines. Now, we can envision new cars with tailpipes being banned by 2035, in places as diverse as California, Europe and China.

We’re just getting started in a transition that will last the course of our lifetimes. But these past 10 years have seen a lot. What a long, strange trip it’s been.

John Voelcker edited Green Car Reports for nine years, publishing more than 12,000 articles on hybrids, electric cars and other low- and zero-emission vehicles and the energy ecosystem around them. His work has appeared in print, online and radio outlets that include Wired, Popular Science, Tech Review, IEEE Spectrum and NPR’s “All Things Considered.”

What Video Game Has the Best Fictional Cars?