Mercedes-AMG G63 is Freaking Nuts in the Best Way

The new-for-2019 Mercedes-AMG G63 may look like a sport utility vehicle, but it’s not. I mean, fine, if you’re going to go all Microsoft Excel on me, then OK, technically that’s how you’d classify the thing. But labeling the G63 an SUV is like calling an eight-course tasting menu at Le Bernardin “chow.” That’s because the G63 isn’t a mere vehicle—it’s a magnificent, totally implausible masterpiece of mechanical art.

Those familiar with the lore know the Mercedes Geländewagen (“cross-country vehicle”) was born as a military machine and has gone largely unchanged since 1979. It’s boxy, utilitarian, and more army barracks than penthouse suite. But along the way the G-Wagen has also become a cool, battle-ready sport ute of choice for the rich and those who want to look like they are. In status-obsessed L.A., black G-Wagens are as common as kale salads and hair restoration clinics. None of them—despite having three locking differentials and proven go-anywhere capabilities—has ever faced terrain more challenging than the valet stand at Neiman Marcus. Not yet, that is. See, for the gilded gentry, G-Wagens are the four-wheeled equivalent of a basement full of gas masks and freeze-dried beef stroganoff. When the Big One finally strikes, the G-wielding Kardashians will simply creepy-crawl their way out of the smoking ruins. 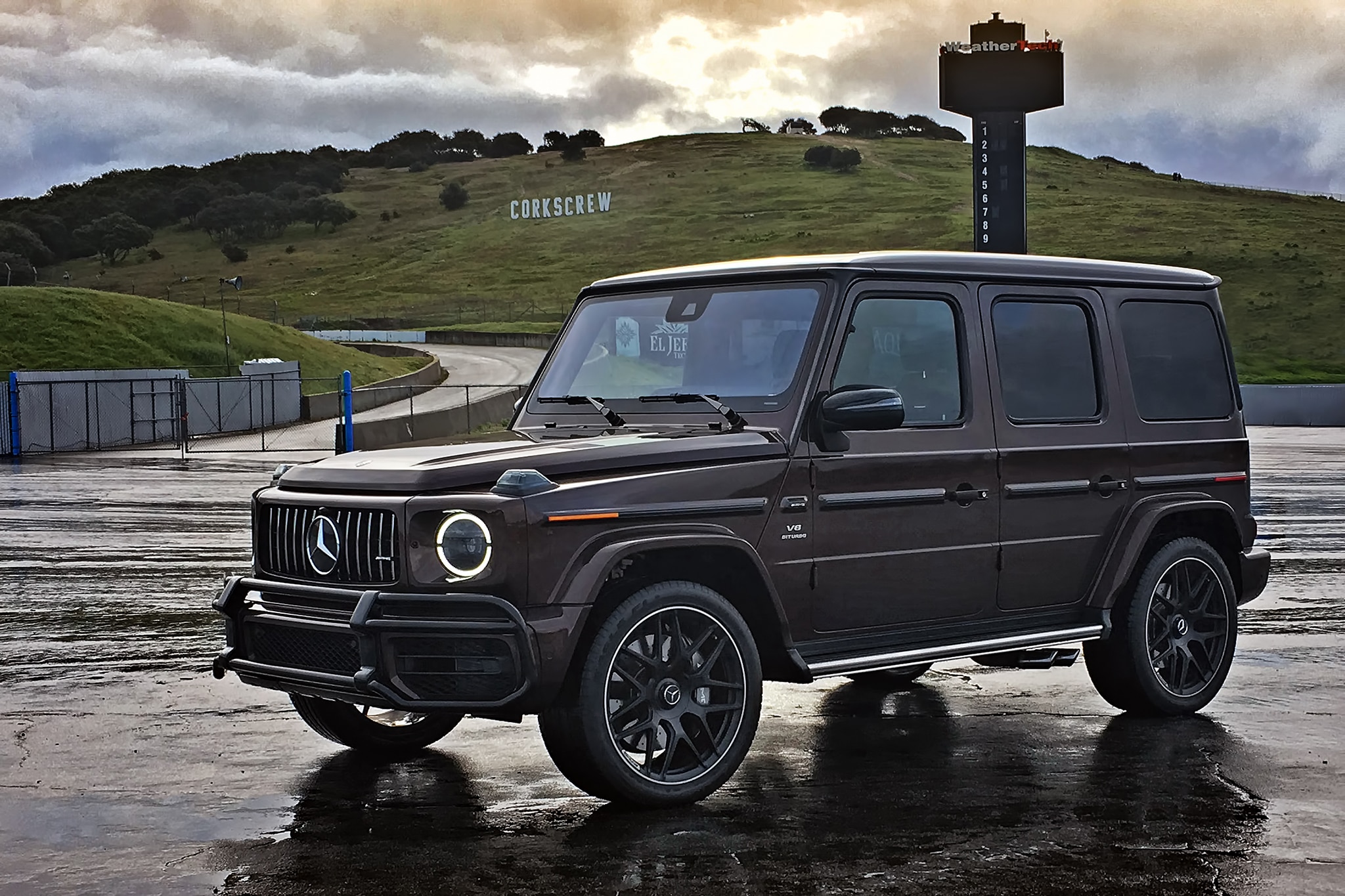 For the 2019 model year, Mercedes finally unveiled a true, new G-Class—and fixed everything that needed fixing. Now there’s generous width up front. The ride is hugely improved. A new nine-speed automatic mates with a more powerful twin-turbo V-8. Beautiful digital displays now gleam in the instrument panel. There’s even 64-color LED mood lighting so you can bask in the nightclub ambiance even if the doorman won’t let you in. Yet the essential “G stuff”—the burly look, the off-road prowess, the tanklike build quality, even the push-button door handles—remains essentially the same. My colleagues and I were so impressed that we awarded the new G550 a spot on our 2019 Automobile All-Stars list.

But now I’ve completed a week behind the wheel of the AMG G63, which starts just south of $150,000. And while the base G550 is already over the top in every way, the G63—and I mean this in the best way—is freaking nuts. (Want to see an even nuttier G63? Check out this $1.2 million armored model.) The G550’s blown 4.0-liter V-8 is a studly piece. But for the AMG G63, “just” 416 hp simply won’t do. Instead, each G63 engine is hand-built from start to finish by a single AMG tech and then signed. (Wherever you are, Chris Kistler, I admire your handiwork.) Exotic features include a high-strength closed-deck crankcase (which you’ll also find on Top Fuel dragsters), heat-resistant sodium-filled valves, and low-friction Nanoslide cylinder walls straight off of Lewis Hamilton’s Formula 1 car. Total output: 577 hp and 627 lb-ft of torque. Like I said, nuts.

As impressive as that brawn looks on paper, on the road it’ll leave you babbling in disbelief. The G63 weighs damn near three tons, but you’d never know it. The first time I mashed down on the throttle in Sport+ mode, I thought I’d driven off a cliff. The G63 just flung itself at the horizon, the permanent all-wheel drive slamming every lb-ft to the asphalt, the quad side pipes blaring like an angry grizzly stuck in a dumpster, the acceleration so fierce it could straighten teeth sans braces. Mercedes claims a 0-60 time of just 4.5 seconds. No way. I’d wager money it’ll do it in less than 4 flat. After a half-hour romping the square-jawed beast through a string of empty desert roads, my reality was so twisted I felt like I was driving in a cartoon. 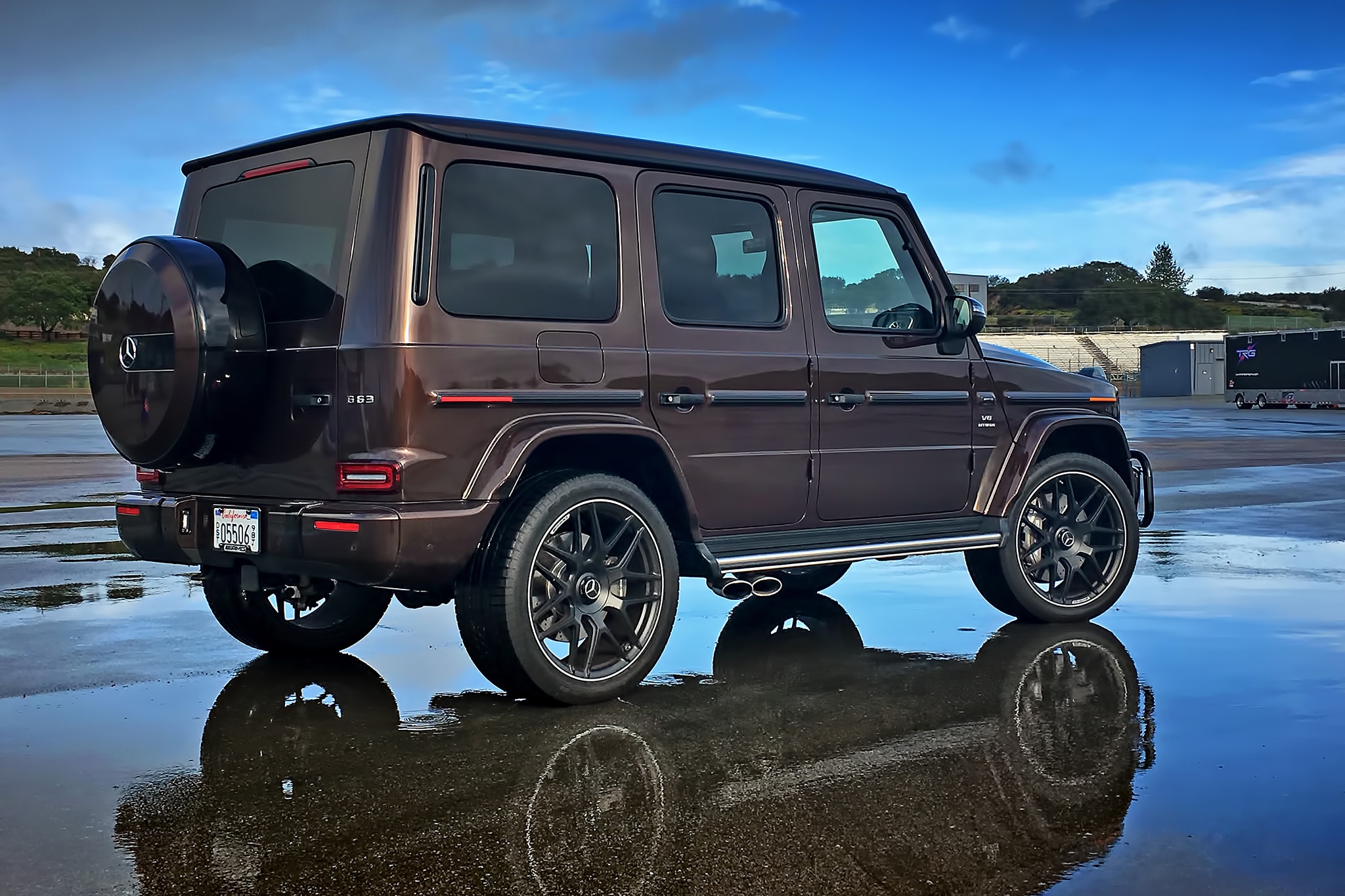 It’s not just the mind-blowing straight-line speed. The G63 stands 6.5 feet tall and boasts 9.5 inches of ground clearance, but it’s got enough cornering power to transform any cargo in back into Silly Putty. My test car wore optional 22-inch rims ($4,450) with low-profile Goodyear Eagles that clung to the earth like four geckos. Sure, it rolls a little, but less than you’d expect, and its handling poise is physics-defying—like watching an elephant win gold in the slalom. But I know how AMG’s engineers do it: magic.

When you’re done roughhousing, Comfort mode softens the ride like an apology, the engine burbles, your troubles and concerns melt away. I put more than 700 miles on the G63, blissfully ensconced by noise-canceling glass, my nose savoring the Mercedes Air Balance air purification system, my backside basking in a ventilated Nappa leather seat with massage.

Read More
2020 Navigator Gets All Monochrome-y with New Option
The Escalade Gets . . . a Sport Edition?
Review: New Mercedes GLS Is Larger and in Charger